She Says: Michael C. Hall in Search of Nothing in Thom Pain

She Says: Michael C. Hall in Search of Nothing in Thom Pain

“Does it scare you? Being face to face with the modern mind?” The answer is yes if Thom Pain (Based on Nothing) at the Signature Center/Diamond Theater is indicative of that. If it weren’t for the fact that the incredible Michael C. Hall (“Dexter”) was the man delivering the narcissistic monologue, I would have been tearing my hair out at this absurdist work by Will Eno. 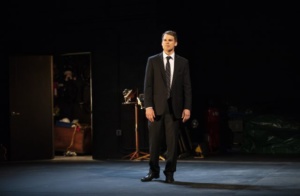 In researching this play, I was stunned that in 2005, Thom Pain (Based on Nothing) was a finalist for the Pulitzer Prize. Thank God Doubtwon. However, Mr. Eno did win the Drama Desk Award for this piece. The show has actually had several productions.

Within 15 minutes of this rambling monologue, a man left the show and Mr. Hall berated him with a F**k You and was called a C**t. It was so natural that I have a feeling this happens almost every night. Turns out, I am right, he is a plant, but I can guarantee that a lot of the audience members wished they could join him.

After what seems like a prolonged silence, Mr. Pain (Hall) enters, keeping us in the dark, until the blinding lights by Jen Schriever come on. As Pain speaks, we learn he has suffered a lot, starting off as a child. We hear a story about a little boy in a cowboy hat, who is really him. After he is described, we are told: “Now, break his arm.” The more he tells about his life, the more Pain goes non-linear, not finishing sentences, totally self-absorbed. He sneers, he looks down on the audience. When we feel sorry for his dog dying and his reaction, we feel sympathy and heartache for this man, but then he inflicts his pain onto the audience and well there went my empathy.

According to Eno: Thom Pain (Based on Nothing) is a monologue that is painstakingly constructed to create the effect of humanness in action, the above-mentioned “rambling” quality, a real-time display of consciousness and self-consciousness that tumbles forward, as Thom tries to tell his life story but keeps getting interrupted by the simple fact that he’s alive. Because of his own defects, strengths, anxieties, and personality, he finds himself asking major questions about human life and how we define it, narrate it, value it, and ultimately live it.

Sadly, that is not what I saw. Though there was laughter, there wasn’t from me, as I do not find people putting other people down, or people that take their pain and inflict it on others funny. There is not one genuine feeling in this piece.

At one point, Pain asks for a volunteer to join him. Not one volunteer from my audience wanted to be a part of that.

Hall’s delivery is deadpan and perfect. I would love to see him do The Screwtape Letters, which is a much better version of this soul searching done by a demon.

As the show ended, you could tell who liked it and who didn’t by their applause and the conversations down the street.