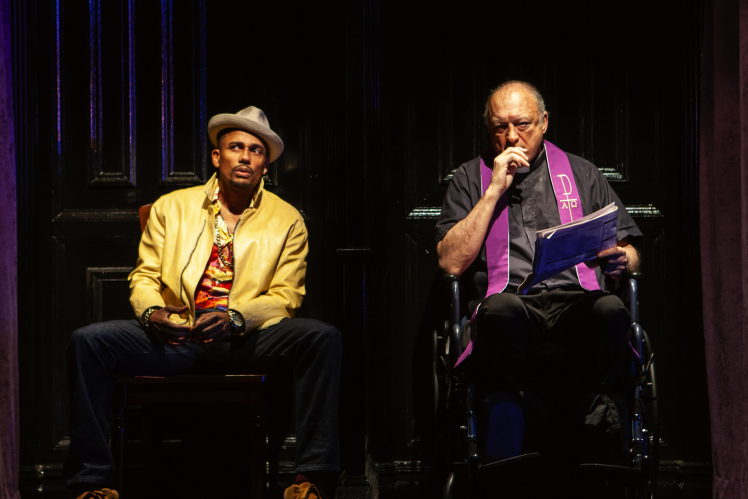 She Says: Our Lady of 121st Street Where Life Seems More Like Purgatory

She Says: Our Lady of 121st Street Where Life Seems More Like Purgatory 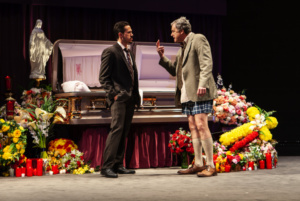 The revival of Stephen Adly Guirgis Our Lady of 121st Street, at the Signature Theatre, is well directed by Phylicia Rashad. Though the dialogue of Adly Guirgis is like a score of music, his characters, are people we never want to know or if we do we wish we didn’t. There is not one redeemable human among them. Sure they spout dialogue like a roller coaster at full speed, rounding corners that can give you whiplash, but in the end nobody changes and life goes on the same. 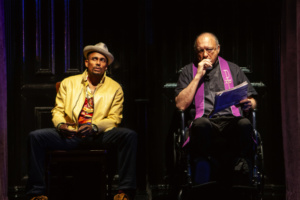 We have come to the funereal of Sister Rose in Harlem, where her casket has been robbed. Victor (John Procaccino) begins his opening monologue without pants, because the thieves not only stole the corpse of the alcoholic nun who taught many of the play’s  characters, but they also took his pants while he was asleep. This play is a cacophony of rage and frustration. 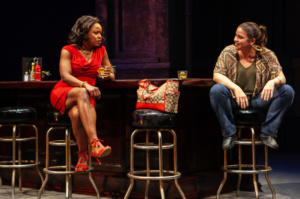 The show serves as a reunion of these troubled souls, with a reckoning of the demons, who haunt them. Balthazar (Joey Auzenne), is the alcoholic cop investigating the sister’s disappearance. Flip (Jimonn Cole) a successful attorney in the Midwest, who brings along his unsuccessful actor of a boyfriend Gail (Kevin Isola). Though they have been together for a longtime, Flip is still in the closet and wants to stay there. His boyfriend has other ideas, which Flip does not take kindly to. Rooftop (Hill Harper), is a successful deejay in LA, whose ex-wife Inez (Quincy Tyler Bernstine), is none to thrill to see, consider he cheated on her with her best friend, the hot tempered Norca (Paola Lazaro). Edwin (Erick Betancourt) carries the guilt and the burden of taking care of his mentally challenged brother Pinkie (Maki Borden). Marcia (Stephanie Kurtzuba), Sister Rose’s asthmatic niece, is anti-smoking for good reasons. Most of these souls confess to Father Lux (John Doman), who has his own troubles. 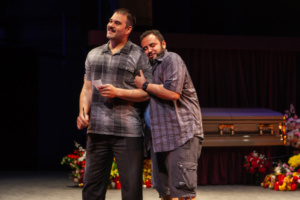 The cast is uniformally exceptional in their portral of these downtrodden mortals.

Phylicia Rashad keeps this fast paced drama at a heightened reality, so we never lose track of who is who.

Our Lady of 121st Street, seems more like vingettes rather than a cohesive play. Nobody moves foreward, everybody is trapped in their own version of hell, with no hopes of escape. I miss the olden days when plays had arc’s and they weren’t just slices of life.