She Says: Paradise Blues – Where Talent is Haunted by the Past

She Says: Paradise Blues – Where Talent is Haunted by the Past 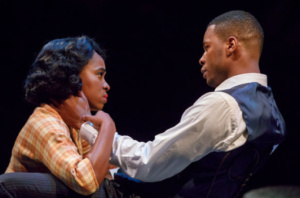 Black Bottom was a predominantly black neighborhood in Detroit, Michigan demolished for redevelopment in the early 1960’s and replaced with Lafayette Park. An adjacent north-bordering neighborhood was known as Paradise Valley. Major African-American communities of black-owned business, social institutions, and nightclubs made it nationally famous for its music scene: major blues singers, big bands, and jazz artists—such as Duke Ellington, Billy Eckstine, Pearl Bailey, Ella Fitzgerald, and Count Basie who regularly performed in the bars and clubs of Paradise Valley entertainment district. 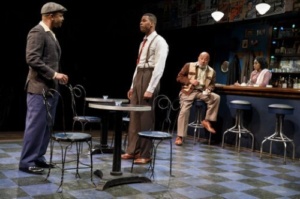 Dominique Morisseau’s new play, Paradise Blue, is the last of the playwright’s three-play cycle, “The Detroit Project”. Set in 1949, it is the start of the buy out that ended the music and the livelihood of Paradise Valley. Blue (J. Alphonse Nicholson [NFT’s Freight]), a trumpet player who owns one of the top clubs aptly named Paradise, is haunted by his father’s ghost and his lack of confidence in his talent. Blue has inherited the club from his jazz-great father, whose soul is suffocating Blue out of existence. The play begins and ends with his getting shot; the question is why? 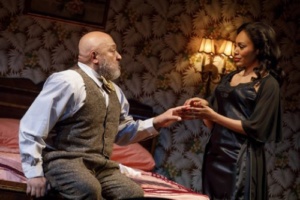 At the club, his girlfriend, Pumpkin (Kristolyn Lloyd [Broadway’s Dear Evan Hansen]) is the solace to Blue’s madness that is consuming him rapidly. She is also the kindness to the inhabitants that are slowly losing their place in society. She knows and understands her lot and is content. Pumpkin uses poetry to sooth the hardship around her. 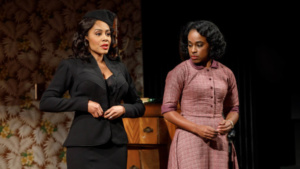 The quartet which Blue is a part of has lost a member, but for Blue, this means he can move on. Not telling the other two members, P-Sam (Francois Battiste [Public’s Head of Passes]) the drummer is miffed and sees the bigger picture. Corn, the piano player (Keith Randolph Smith [Broadway’s American Psycho]), understands Blue the most. When the stunning Silver arrives (Simone Missick [Marvel’s “Luke Cage”]) everything is set into motion.

In the end, the inhabitants of Paradise stand-up for their rights and for keeping humanity intact. As Blue breathes his last note, he has truly been released and transcends with his last sigh somewhere where the music never dies.

The cast is powerful, and each character is so skillfully written that this wonderful ensemble exudes vitality. By the end of the play, we know each and every person on stage. Mr. Nicholson brings forth pain, talent, and a man who is doomed way before his time is gone. Ms. Missick is like the devil whose slick ways and blatant truth seduce and disintegrate. Ms. Lloyd brings humanity to the forefront, and in a way is the angel who releases the soul to flight.

Rubin Santiago-Hudson (MTC’s Jitney) treats this piece like an August Wilson play and because of that it is hard not to draw comparisons. Ms. Morisseau’s play under Mr. Santiago-Hudson’s fine-tuned direction is like a Stradivarius playing jazz chords and blue notes.

Neil Patel’s set lined with posters from the musicians of the day, mood lighting by Rui Rita, period costumes by Clint Ramos, hair and wigs by Charles G. LaPointe, and top-rate sound by Darron L. West lets you know where you are and asks you to settle in for this slice of life.

The original Music by Kenny Rampton with songs also by music director Bill Sims, Jr. is magical, and I hope it is remembered by next award season because it is truly wonderful.

Paradise Blue starts this upcoming season on a high note. Do not miss this production.

Suzanna BowlingJune 18, 2022
Read More
Scroll for more
Tap
He Says: Paradise Blue Blows Us and Itself Away On a Beautifully Held Note
Peace for Mary Frances Comes at a Cost