She Says: Pretty Women Makes a Better Play Than Musical

She Says: Pretty Women Makes a Better Play Than Musical

Pretty Woman: The Musical at the Nederlander Theatre is written by the fabulous Garry Marshall, director of the film Pretty Woman, and screenwriter, J.F. Lawton who wrote the film Pretty Woman. The book still retains its magic; however, Pretty Woman: The Musical loses its magic because of the generic pop score by Bryan Adams and Jim Vallance. Adams biggest claim to fame recently is he was invited to perform at the Royal wedding of Prince Harry and Meghan Markle. He had number-one singles with “Heaven”, “All for Love”, and “Have You Ever Really Loved a Woman?”. Vallance is best known as the songwriting partner of Bryan Adams and their song “It Cut’s Like a Knife” is a classic, but the two have never written for musical theatre and it shows. The songs neither enhance the show or move the story forward. 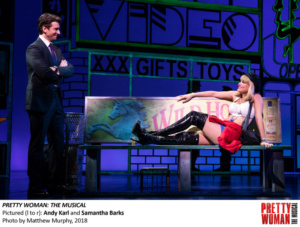 In the roles of Vivian Ward and Edward Lewis, the adorable Samantha Barks (Éponine in the West End and Universal Film’s Les Misérables) and Andy Karl (Ground Hog Day) manage to take our minds off Julia Roberts and Richard Gere. The plot is still the same: high-powered businessman Edward Lewis (Karl) is a corporate raider, who buys companies that are in financial trouble and tears down the company piece by piece. Taking his lawyer Phillip’s (a smarmy Jason Danieley) Lotus Esprit sports car, he ends up on Hollywood Boulevard in the city’s red-light district, where he encounters prostitute Vivian Ward (Bark’s). Having problems with the car, Vivianne ends up driving the two to the Regent Beverly Wilshire Hotel, where Vivian charges Lewis $20 for the ride. Edward hires her for the night; later, he asks Vivian to stay the week, offering her $3,000 to stay with him for the next six days as well as buying her a new wardrobe. That evening, visibly moved by her transformation, Edward begins seeing Vivian in a different light. He begins to open up to her, revealing his personal and business lives. 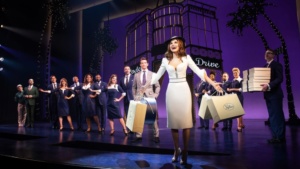 Edward takes Vivian to a polo match in hopes of networking for his business deal. Phillip approaches Vivian, suggesting they do business once her work with Edward is finished. Insulted and furious that Edward has revealed their secret, Vivian wants to end the arrangement. Edward apologizes and admits to feeling jealous of a business associate to whom Vivian paid attention to at the match. Vivian’s straightforward personality is rubbing off on Edward, and he finds himself acting in unaccustomed ways. Clearly growing involved, Edward takes Vivian to see La Traviata. Vivian is moved to tears by the story of the prostitute who falls in love with a rich man. Vivian breaks her “no kissing on the mouth” rule, which her friend Kit (Orfeh) taught her and tells Edward she loves him. Meeting with the tycoon, James Morse (Ezra Knight ) and his son (Robby Clater), whose shipbuilding company he is in the process of “raiding,” Edward changes his mind. His time with Vivian has shown him a different way of looking at life, and he suggests working together to save the company rather than tearing it apart and selling off the pieces. Phillip, furious at losing so much money, goes to the hotel to confront Edward but finds only Vivian. Blaming her for the change in Edward, he attempts to rape her. Edward arrives, wrestles Philip off her, punches him in the face, and throws him out of the room. Edward offers to put Vivian up in an apartment, but hurt, she refuses and says this is not the “fairy tale” she dreamed of as a child, in which a knight on a white horse rescues her. Edward realizes the errors of his way and has the hotel chauffeur detour to Vivian’s apartment building, where he leaps out the white limousine’s sunroof and “rescues her.” Edward asks, “So what happens after he climbed up the tower and rescues her?” to which Vivian responds, “She rescues him right back.”

Andy Karl has become a leading man with some depth and Samantha Barks is a leading lady who looks stunning in her gorgeous wardrobe by Gregg Barnes. Ms. Barks is a find and both actors make this their own, which I didn’t think was possible. They are given the most mundane songs with lyrics that keep repeating and manage to sell them. Would I buy a cast album….NO! These two are so charming and engaging they sell the show. 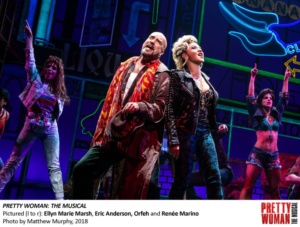 Opening the show and guiding our journey is Eric Anderson (Mr. O’Malley in the film “The Greatest Showman”) as the Happy Man and the manager with a heart at the Beverly Wilshire Hotel, Mr. Thompson, who befriends Vivian. Mr. Anderson does not have the strongest of voices, so when Orfeh enters with her magnificent instrument, she overpowers him and shows off his weakness. However, Mr. Anderson is a wonderful actor. Orfeh, however, seems to be phoning in her performance and not engaged with her fellow performers and yet she has wonderful comic timing. Jason Danieley makes Philip Stuckey oh so slimy with Ezra Knight and Robby Clater making the most of their roles. Dancer Bell Hop, Tommy Bracco at times steals the show with his antics and flexibility. 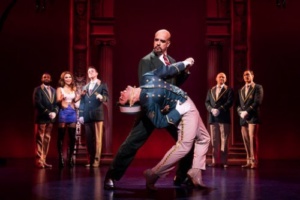 Directed and choreographed by Jerry Mitchell, there are some hit and misses. The scenes involving sexual moments are done exceedingly well, but the rest seems just generic.

The set by David Rockwell is nothing special, the lighting by Kenneth Posner & Philip S. Rosenberg is wonderfully done especially in the silhouetting.

I didn’t dislike this production, I just found it lacking.

Suzanna BowlingNovember 29, 2022
Read More
Scroll for more
Tap
He Says: Pretty Woman Needs To Find Another Word for Fine, Something More Unique To This Musical
Lillian Hellman’s Days to Come Fails to Make Us Care