She Says: Raul Esparza is Mesmerizing in Classic Stage Company’s The Resistible Rise of Arturo Ui 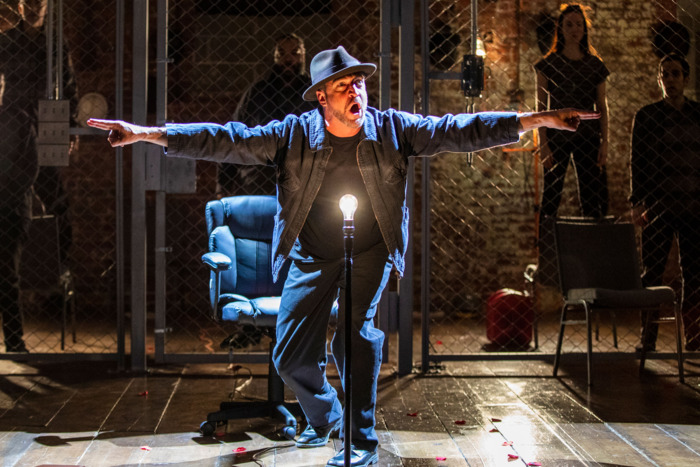 She Says: Raul Esparza is Mesmerizing in Classic Stage Company’s The Resistible Rise of Arturo Ui

“You’ll see enacted by our finest actors / The underworld’s most fabled malefactors! 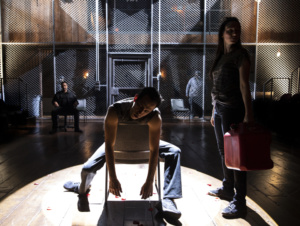 The Resistible Rise of Arturo Ui, is very rarely done. This 1941 play by the German playwright Bertolt Brecht chronicles the rise of Arturo Ui, a satirical vaudevillian piece about  the rise of Adolf Hitler and the Nazi Party. Ui, is a fictional 1930s Chicago mobster, who attempts to control the cauliflower racket by ruthlessly disposing of the opposition, including friends. Ui representing Hitler, his henchman Ernesto Roma (Eddie Cooper) representing Ernst Röhm, the head of the Nazi brownshirts; Dogsborough (Christopher Gurr) representing General von Hindenburg, a hero of World War I and the President of the Weimar Republic (his name is a pun on the German Hund and Burg); Emanuele Giri (Elizabeth A. Dvis) representing Hermann Göring, a World War I flying ace who was Hitler’s second in command; Giuseppe Givola (Thomas Sesma) representing the master propagandist Joseph Goebbels; the Cauliflower Trust (Maria Kakkar and George Abud) representing the Prussian Junkers; the fate of the town of Cicero (Omoze Idehenre) standing for the Anschluss, which brought Austria into the Third Reich; and so on. In addition, every scene in the play is based, albeit sometimes very loosely, on a real event, for example the warehouse fire which represents the Reichstag fire, and the Dock Aid Scandal which represents the Osthilfeskandal (Eastern Aid) scandal. The play is similar in some respects to the film The Great Dictator (1940), which also featured an absurd parody of Hitler (“Adenoid Hynkel”) by Charlie Chaplin, Brecht’s favorite film actor. 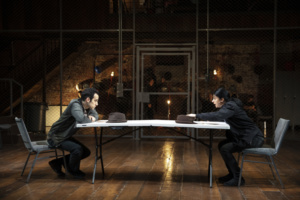 John Doyle, wrote in the press release, “Everyday I read the play, I think, I hear these words on CNN as I read them on the page.” And there is little doubt that you will draw comparisons to the political corruption this country is in. 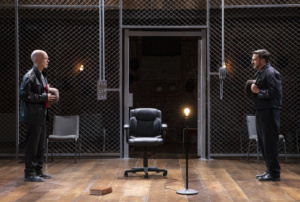 Plotting, scheming and corruption are at an all time high. The company of actors play a multitude of roles as they start from behind a metal fence. The language, in rhyme hides the evil that lurks no matter what way you turn. And if that weren’t enough, Shakespearean references are there at your disposal. Directed by John Doyle like a vaudevillian flick, he uses narrators and choruses and you get the feeling that this fascism is being portrayed subtly right before your blinded eyes. 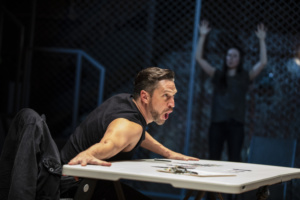 Esparza is at the top of his game playing Ui. With his intonations, stance and walk, you will be unable to take your eyes off him. He is narcissistic all smiles and good intentions and a psychopath with his next breath ready to terminate those who do not see his way. He is that monster that we all fear will sneak back in and World War III will begin or has it in an underhanded psychological way? The rest of the cast plays more than 30 characters Elizabeth A. Davis excels as a gum-smacking assassin who collects the hats of her victims. Cooper and  Sesma), also stand out, though the cast is the perfect ensemble. 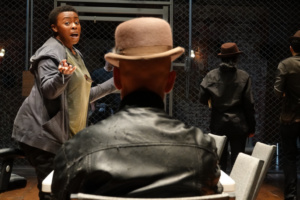 Everything is kept stark, from the monochromatic street wear by Ann Hould-Ward, to the bare steel of industrial chain link, plastic folding tables, metal folding chairs designed by Doyle. To keep us just a little off key fluorescent lights taken care of by Jane Cox and Tess James. When a scene is done the word lights is said and the room goes back to regular lighting.

This is a cautionary tale, but will we head it? Hitler was voted in with a 98% of the populace giving him their support. Something to think about.

Suzanna BowlingAugust 3, 2022
Read More
Scroll for more
Tap
He Says: The Resistible Rise of Arturo Ul Hits Hard Its Modern Day Mark
The York Theatre Gala Honors Susan Stroman and You Are There