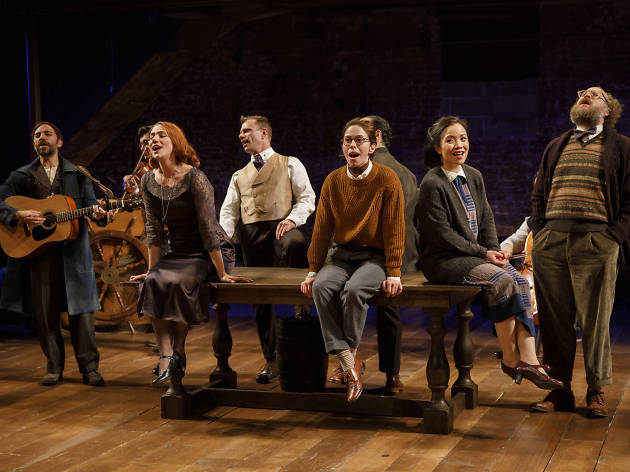 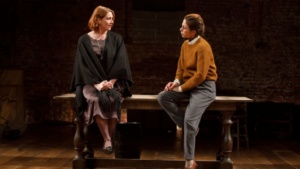 Jessie Austrian, Emily Young Photo by Joan Marcus “Be not afraid of greatness. Some are born great, some achieve greatness, and some have greatness thrust upon ’em.”
— Malvolio 2.5.128
Shakespeare, can be daunting and inaccessible, yet in the hands of the delightful company of Fiasco, Twelfth Night comes alive, as never before. The company comes out before the show and starts addressing their audience, getting to know them, letting them know this production is for them. For those who are not familiar with Fiasco Theatre Company (Into the Woods), they are an ensemble theater company created by graduates of the Brown University/Trinity Rep M.F.A. acting program. Founding company members  Jessie Austrian, Noah Brody, Paul L. Coffey, Andy Grotelueschen, Ben Steinfeld and Emily Young all perform here. Noah Brody and Ben Steinfeld co-direct, with Brody playing Duke Orsino and Steinfeld playing the fool and singing up a storm. 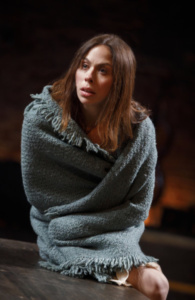 We start at sea, as the set pieces get unpacked and turn into a ship. A sea shanty tells us the tale of Viola (Emily Young) and Sebastian, twins who are shipwrecked off the coast of Illyria. Separated, each believes the other dead. 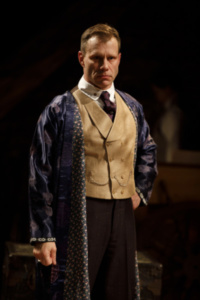 In Illyria Viola disguises herself as a boy and becomes Cesario. Viola falls in love with Duke Orsino, for whom she has come under the care of. He is in love with the Countess Olivia (Jessie Austrian). Cesario is sent to Olivia to plead the Duke’s case of love, but Olivia falls in love with her thinking she is a man. 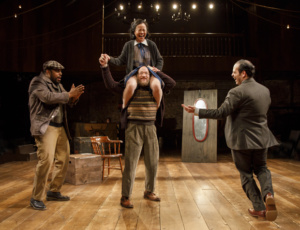 In a comic subplot, Sir Toby (Andy Grotelueschen) Olivia’s mischievous and drunken uncle, Sir Andrew (Paco Tolson) another would be suitor, and Maria (Tina Chilip), Olivia’s maid plan revenge on Olivia’s pompous steward, Malvolio (Paul L. Coffey). They make Malvolio believe that Olivia has fallen for him by planting a love letter, written by Maria in Olivia’s handwriting. It asks Malvolio to wear yellow stockings cross-gartered, to be rude to the rest of the servants, and to smile constantly in the presence of Olivia. Pretending that Malvolio is insane, they lock him up in a dark chamber. Feste visits him to mock his insanity, both disguised as a priest and as himself.

Meanwhile, Viola’s twin, Sebastian (Javier Ignacio), has been rescued by Antonio (David Samuel), an outlaw whom Orsino wants arrested. Taking Sebastian for ‘Cesario’, Olivia asks him to marry her, and they are secretly married in a church. Finally, when ‘Cesario’ and Sebastian appear in the presence of both Olivia and Orsino, there is more wonder and confusion at their similarity. At this point, Viola reveals her disguise and that Sebastian is her twin brother. The play ends in a declaration of marriage between Duke Orsino and Viola, and it is learned that Sir Toby has married Maria.

This show is Emily Young’s who is a powerful Viola. She brings out the heroine qualities, yet lets us see her vulnerability hidden underneath her strength. Noah Brody’s Duke is poised and again allows the Duke’s emotions to shine. We see a man who loves, yet realizes his love has been misplaced.  Jessie Austrian’s Olivia loves with all her heart, but loves not Orsino’s passionate overtures. Steinfeld, as Feste, brings out the heart of Shakespeare’s text. His vocal and guitar make the songs of Twelfth Night shine. Andy Grotelueschen makes a amusing Sir Toby Belch, and together with Tina Chilip we see love stripped down to revery. Paul L. Coffey suffering is also wittily portrayed.
The direction pithy and imaginative. John Doyle set, costumes by Emily Rebholz and lighting design by Ben Stanton are simple, yet delightful.

Twelfth Night or What You Will: Fiasco Theatre Company at Classic Stage Company, 136 East 13th until Jan 6th. 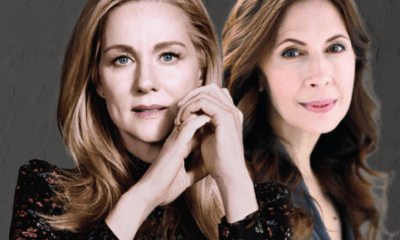 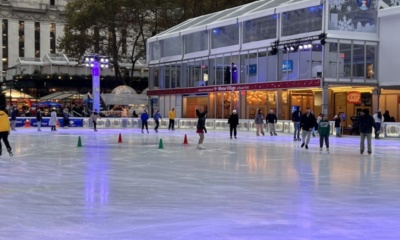 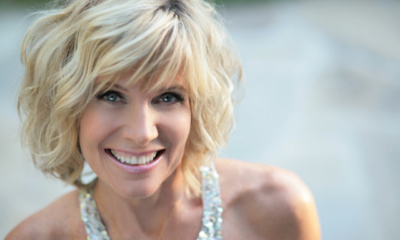 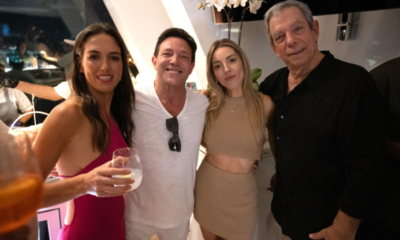 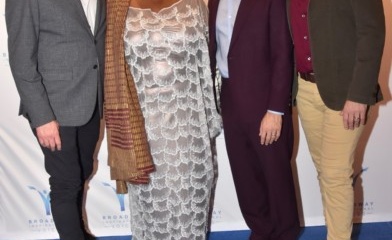