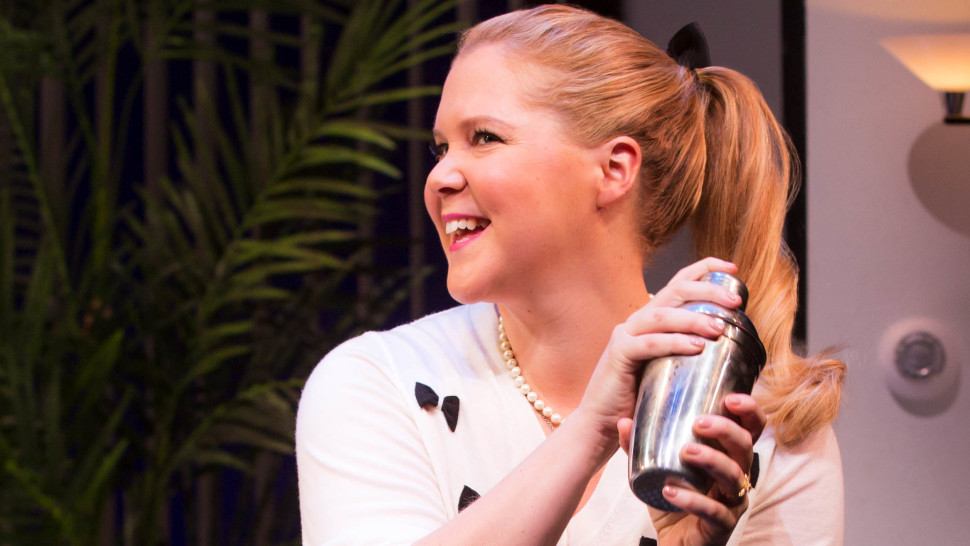 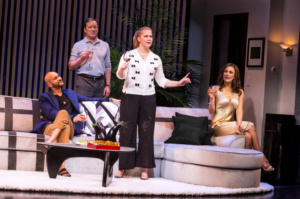 Steve Martin’s Meteor Shower, like the night sky, is fleeting in plot and substance, but starry and brilliant in performances. For those who bought tickets to see Amy Schumer in her Broadway debut, you will not be disappointed.

It is 1993, and longtime married couple Corky (Schumer) and Norm (Jeremy Shamos) are having guests. This couple is typical of the EST movement that was going around. They hold hands and state affirmation messages to each other when one knows they have hurt the other’s feelings. “I’m asking you to be more careful with my feelings,” Corky says. “They are not playthings.” Norm repeats back to show he hears and is listening.

Norm has invited Gerald (Keegan-Michael Key) and Laura (Laura Benanti) to their home in Ojai to watch a meteor shower. Unlike Corky and Norm, this couple is the bad seed and this night keeps repeating, though slightly altered.

Secrets get unearthed as do bad behaviors. Norm reveals Corky is a cannibal as Gerald shoots up, Laura comes onto both parties, as does Gerald, and well, Norm gets hit by a meteor.

Turns out their guests are the embodiments of all their bad qualities and the test is can this relationship survive. The problem is it’s never explained why this is happening. We’re just supposed to consider this an absurdist play and accept this bizarre night as entertainment.

Each of these four talented, comedic actors win in their characterizations. Amy Schumer lands every laugh and plays, for the most part, the straight one, holding court and making her stand. Jeremy Shamos is the perfect match for Schumer. We can believe these two are married and the couple who despite all odds stays together.  Keegan-Michael Key is wild, crazy, and over the top. Could this be the role Steve Martin wrote for himself? Mr. Key lives up to the challenge. Who steals the show here though is Laura Benanti, whose overt sexuality blazes brighter than the stars that flash across the sky. She is funny, sardonic, bitchy, and so watchable. When she and Amy Schumer have a moment, the stage heats up.

Jerry Zaks keeps this show moving like television stations changing at rapid pace. He allows the comedic aspects to blaze in full glory.

Beowulf Boritt’s set, the exquisite lighting by Natasha Katz, and sound design by Fitz Patton help illuminate this show to its full capacity.

You will laugh, the problem is it just wasn’t memorable. I can see Schumer and especially Benanti being nominated for Tony Awards.