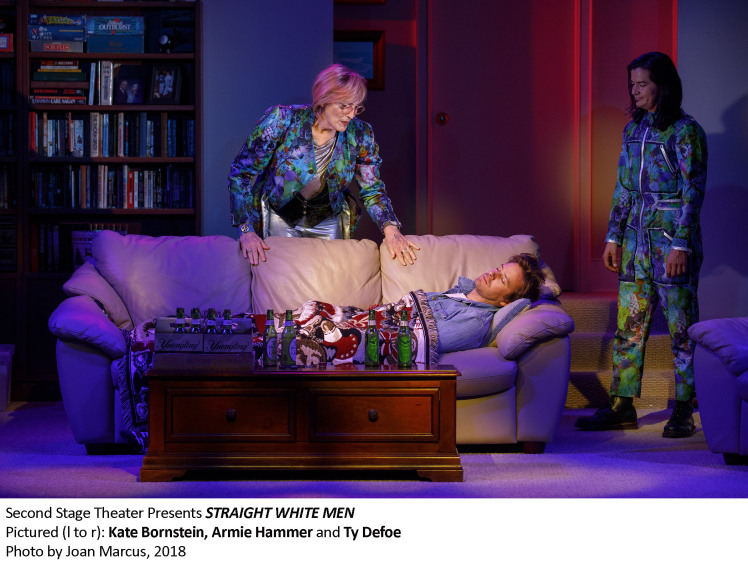 She Says: Straight White Men Are About to Become Extinct

She Says: Straight White Men Are About to Become Extinct

Young Jean Lee is being touted as the first Asian-American woman with a play on Broadway for her “satirical” Straight White Men. While most people in New York will find ¾’s of this play amusing, the laughter dies down by the end. This is a memorial or a funeral for the white males in this society if we let it. 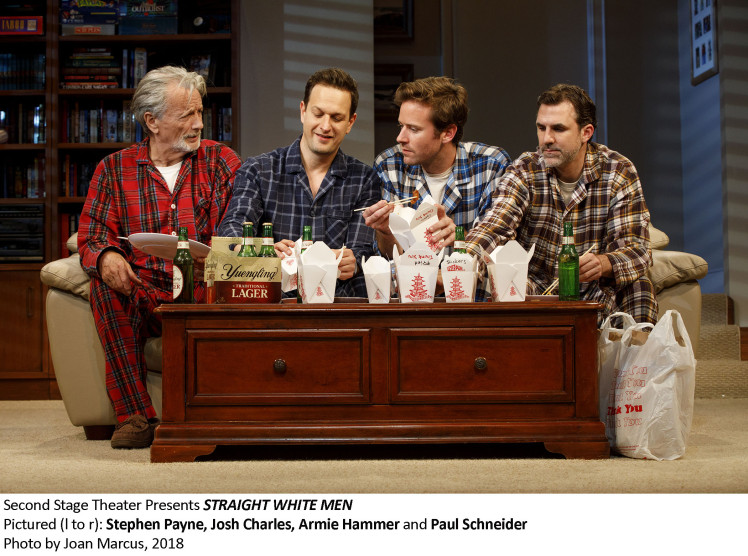 As you walk into the theatre, you feel as if you entered a disco ala 2018. A mylar curtain (set design by Todd Rosenthal) and ear-shattering rap music (sound designer M.L. Dogg!) assault you. Have you walked into the wrong theatre? Kate Bornstein and Ty Defoe show up to let us know that they are “in charge”. Borntein defines herself as non-binary and Defoe, a “transcending gender” member of the Oneida and Ojibwe nations. They ask our forgiveness, stating that our needs might not have been necessarily taken into account. They claim this is an exploration and a game of privilege, but in essence, the term “‘Straight White Male” has become a racial attack meant to demean and demoralize. There is no worst time in history to be a straight white man. These two tour guides walk on a set that looks like it came right out of the Natural History Museum and place the characters into their positions. From there, we meet three brothers and their PC correct father.

It is Christmas Eve, Jake (Josh Charles), a successful banker who’s is smarting from a fresh divorce, and Drew (Armie Hammer), a teacher and successful published author who can’t find or write his next book, act like frat boys pounding on each other as they play a board game their mother devised called “privilege”. Based on Monopoly, you can get stopped by the police for no reason and go directly to jail or, if you pass Go while white, you pay a fine. Their loving, sweet, and homespun father, Ed (Stephen Payne), is hosting his two visiting sons for the holiday. The eldest son, Matt (Paul Schneider), still lives at home. The boys play video games, call each other names, slap each other around, dance badly, and remember the past when Matt was the prodigy who fought the good fight. Matt once started an “awesomely Stalinist” School for Young Revolutionaries, is a Harvard-educated temp who seems stuck, and is going through emotional breakdown as he cries over pot stickers.

Everyone wants to fix Matt. Jake thinks it’s a personal privileged revolution and wants to help get him a job. Drew wants to pay for therapy and his father wants to pay for his student loans and give him financial freedom. Matt denies them all, making it seem he has given up on the game of life and privilege. The play ends with him staring off into space, as we are left to ponder why he has turned down all three offers.

The cast is first rate. Hammer’s moonwalk is the highlight, as is the KKK version of “Oklahoma”.

Under the conceptual eye of Anna D. Shapiro, the show keeps moving along. The costumes by Suttirat Larlarb are era perfect.

Suzanna BowlingJune 21, 2022
Read More
Scroll for more
Tap
August in New York
He Says: Second Stage is Winning the Game of Privilege for These 4 Straight White Men Under Glass