She Say’s: The Band’s Visit Is Still Hallmark Card To Life

She Say’s: The Band’s Visit Is Still Hallmark Card To Life 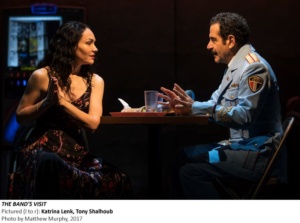 The first time I saw The Band’s Visit I wasn’t that impressed and as much as I wanted to like it this time, my opinion has not changed. I feel like the black sheep of critics, because though I adore the director David Cromer’s work, David Yazbek’s music and lyrics (he has done some of his best work here), Itamar Moses’ writing (his dialogue is powerful and real), I do not adore The Band’s Visit. I was bored, as was my guest. Tony Shalhoub and Katrina Lenk – the girl with the “it” factor and talent to match – couldn’t even hold my interest. Part of the problem is nothing happens other than an accidental cultural exchange, when an Egyptian military band confuses a P for a B and ends up in an isolated Israeli town in the middle of the desert.

Nothing much has changed in the Broadway production, expect the set by Scott Pask feels more secure and not as cramped. 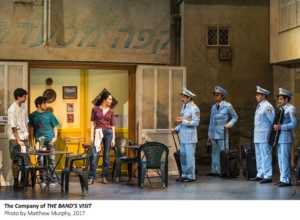 The show starts as The Alexandria Ceremonial Police Orchestra, consisting of eight men, arrive in Israel from Egypt. They have been booked by an Arab cultural center in Petah Tikva, but through a miscommunication (Arabic has no “p” sound, and regularly replaces it with “b”), the band takes a bus to Beit Hatikva, a fictional town in the middle of the Negev Desert. Tawfiq Zacharya (Shalhoub), knows that the government funding is in peril for his little band, as well as the political and cultural significance. Shalhoub’s performance makes this sad man funny, crazy and lovable.

Before the band deports on their journey, the town residences sing about “Waiting,” and how their lives are uneventful. In “Welcome to Nowhere,” there is no transportation out of the city that day and no hotels to spend the night. The band members eat at a small restaurant where the owner, Dina (Katrina Lenk), invites them to stay the night at her apartment, at her friends’ apartment, and in the restaurant, even though the band is virtually broke. That night challenges all the characters.

The Egyptians and the Israelis reluctantly bond, and as they do, the cultural differences seem to fade. In “Hadid’s Song About Love”, Hadid (Daniel David Stewart) explains how he is no good with the ladies so Pipi (Ari’el Stachel), the ladies’ man of the band, shows him the way. Another young husband (John Cariani) is about to lose his wife until he gets help.

Throughout the piece, Telephone Guy (Erik Liberman) is waiting for a call, until the entire ensemble connects and returns his plea.

The music by David Yazbek is a combination of Israeli and Arabic and is compelling. The members of the band are all talented musicians which adds to the sound and the performances. Shalhoub is always wonderful and Ms. Lenk is a find. The whole company is phenomenal at what they do. David Cromer’s direction is plodding and in the end, I felt like I was in a politically correct Hallmark card. Sweet, lovely, charming, and unfortunately my opinion hasn’t changed.

Suzanna BowlingMay 15, 2022
Read More
Scroll for more
Tap
Universal To Develop Musical Based on the Life Story and Music of the Bee Gees
He Says: The Band’s Glorious (Re) Visit to Bet Haatikva and My Heart