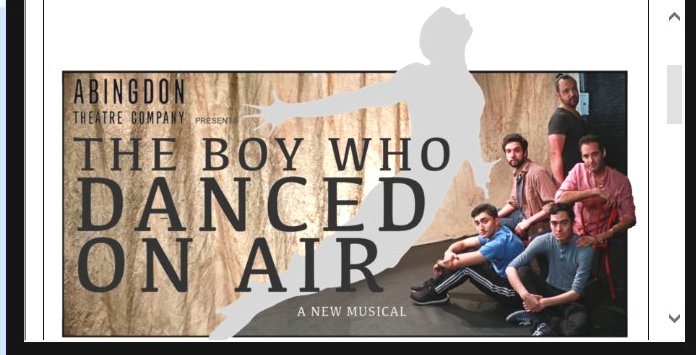 She Says: The Boy Who Danced On Air Romanticizes Pedophilia

She Says: The Boy Who Danced On Air Romanticizes Pedophilia 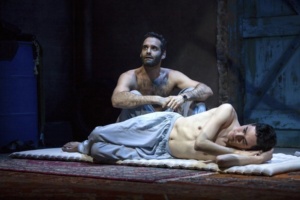 Jonathan Raviv and Troy IwataIt seems romanticizing a man boy love association, is the new topic for musical theatre. Take John Kander’s Kid Victory, and now Tim Rosser (music) and Charlie Sohne’s (book and lyrics) The Boy Who Danced on Air. Both have an incredible score, plausible books, sensational casts and yet one has to wonder who their audiences’s are. The Abingdon Theater Company, has taken some strange steps this year and though I can see why they would want to nurture Rosser and Sohne, not sure why this project. Inspired by the 2010 documentary “The Dancing Boys of Afghanistan,” about the practice of bacha bazi “boy play” is a little on the warped side. This ancient tradition of wealthy men buying boys as young as 10 from poor families, dressing them like women, training them to dance, to lure other men, acting like pimps to provide a sexual outlet, so they do not cheat on their wives, is beyond twisted. The practice is outlawed, yet it continues with a wink and a nod. 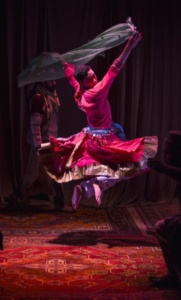 In The Boy Who Danced on Air we follow the story of Paiman (Troy Iwata), who is now 16. We first meet him at 10 when he is sold to the older handsome Jahandar (Jonathan Raviv), who is married. Jahandar tells Paiman that his father didn’t want him as much as he does, as if this is a plausible excuse. Jahandar forms an attachment to Paiman, but the rule of thumb is that as Paiman passes puberty and starts to turn into a man, the tryst must be cut off. In kindness Jahandar arranges for his marriage, but Paiman wants to keep dancing. Things get future complicated when he falls for another dancing boy Feda (Nikhil Saboo), who inspires Paiman and makes him feel safe. Feda’s master Zemar (Ohs Ghanimah), Jahandar’s friends covets Paiman. When Jahandar finds out about the boys love for another boy he becomes increasing jealous. The story is narrated by an unknown man (Deven Kolluri). 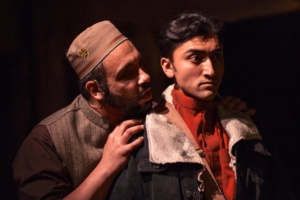 The incredible cast is all wonderful in the roles they have been given. Part of what is bothersome here is Iwata and Saboo (Feda) both seems like they are in there 20’s, which takes away from how really young they are. Good in one way as the older age gap between victim and master is less blatant. Bad because the ages now do not show how truly insidious this is. The entire cast has phenomenal vocals and strong acting abilities. We believe the master, slave relationship and the dependency that turns into a bond. The relationship between the two boys is real and we feel their love and understand completely why this would happen. Saboo nearly steals the show with his song “For A Night.” Raviv also stands out in “I Can See It” and “For A Night.”We feel Iwata’s journey and Ghanimah brings humor and a true sense of depravity to the stage. Even Kolluri brings us on the adventure with his smooth vocals. 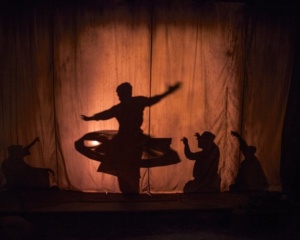 Tony Speciale, directs The Boy Who Danced on Air with sensitivity and some very clever tricks to showcase the age gap. The use of silhouettes is highly effective. The lighting design by Wen-Ling Liao allows much to take place, as does the scenic design by Christopher Swader and Justin Swader.

Mr. Rosser and Mr. Sohne, are young and extremely talented. The music is infectious and theatrical with threads of Pop and Arabic ties blending nicely. The lyrics are grown-up, making their points with statements like “Year by year the boy learns his place.” Until the end the show flows smoothly. There are some things that need to be clarified in the ending but strangely enough the message here is to believe in yourself and follow your dreams, despite your circumstances.

As wonderful as this show is and it has some amazing moments, musicals are now justifying things is society that may not have a right to be seen in such a bright light. Conversations about taboo subjects need to be opened up, maybe this is the venue that will allow this to happen.