She Says: The Boys In The Band a Reflection of How Bitter We Are

She Says: The Boys In The Band a Reflection of How Bitter We Are

“Harold: I keep my grass in the medicine cabinet in the Band Aid box. Somebody told me it’s the safest place. If the cops arrive, you can always lock yourself in the bathroom and flush it down the john.
Hank: Very cagey.
Harold: Makes more sense to where I was keeping it: in the oregano jar in the spice rack. I kept forgetting it and accidentally turning my hateful mother on with a salad. But I think she liked it. No matter what meal she comes over for, even if it was breakfast, she says
[in his mother’s voice]
Let’s have a salad!” 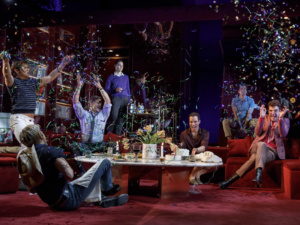 The cast of Boys in the Band photo by Joan Marcus

Mart Crowley’s 1968 groundbreaking play The Boys in the Band was produced 14 months before Stonewall changed the LGBT community. In a sense, it foreshadowed what was brewing underneath. This play, full of self-loathing and sarcastic bitchery, is very much how the world is now. We haven’t really changed.

“Michael: [sings] Forget your troubles, c’mon get happy! You better chase all your cares away! What’s more boring than a queen doing a Judy Garland imitation?
Donald: A queen doing a Bette Davis imitation.”

The Boys in the Band follows Michael (Jim Parsons), an ex-alcoholic who tortures his hair to not seem bald, spends over his head, and lives on credit. He is throwing a 32nd birthday party for his friend Harold (Zachary Quinto). Michael obviously represents Crowley, who is a master of the bitchy one-liner, but behind every joke is a painful reminder that these men may not like each other, and most definitely do not like themselves. The jokes border on desperation, loneliness, and sex.

First to arrive is Daniel (the handsome Matt Bomer), Michael’s sometimes boyfriend who has moved to the Hamptons to spurn the homosexual “lifestyle” and is undergoing psychoanalysis. Michael’s married ex-college roommate, Alan (Brian Hutchinson) has called wanting to see Michael. The problem is, Michael has never come out to him. Enter Emory (Robin de Jesus), a flamboyant and effeminate interior decorator and his boyfriend, Bernard (Michael Benjamin Washington), an African-American who takes all of Emory’s racist stereotype jokes. Next up are Larry (Andrew Rannells), a fashion photographer who prefers multiple sex partners, and his live-in boyfriend Hank (Tuc Watkins), who was married to a woman whom he is separated and is divorcing. Emory’s gift for Harold is “Cowboy” (Charlie Carver), an attractive blond prostitute who is “not too bright” and is told to wait over by the gifts. Last to arrive is Harold. 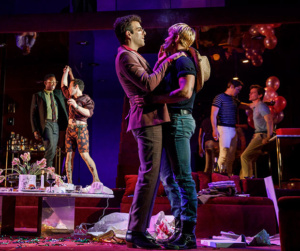 Zachary Quinto, Charlie Carver and the cast of the Boys in the Band photo by Joan Marcus

“Michael: You’re stoned and you’re late. You were supposed to arrive at this location at eight thirty dash nine o’clock.

Harold: What I am Michael is a 32 year-old, ugly, pock marked Jew fairy, and if it takes me a little while to pull myself together, and if I smoke a little grass before I get up the nerve to show my face to the world, it’s nobody’s god damned business but my own. And how are you this evening?”

Just then, Alan arrives unexpectedly. As Michael goes off the wagon, he seeks to inflict his hurt on his friends via a telephone game. His intention is to out Alan. After things have gone off the deep end, Harold speaks to Michael before everyone leaves.

“Harold: You’re a sad and pathetic man. You’re a homosexual and you don’t want to be, but there’s nothing you can do to change it. Not all the prayers to your god, not all the analysis you can buy in all the years you’ve got left to live. You may one day be able to know a heterosexual life if you want it desperately enough. If you pursue it with the fervor with which you annihilate. But you’ll always be homosexual as well. Always Michael. Always. Until the day you die.”

This star-studded cast, all of whom are gay, brings heart. Jim Parsons allows us to see all sides of Michael and though he is the bitchiest queen of all, we feel for him. Matt Bomer brings us sympathy and a well-rounded characterization. Robin de Jesus moves the audience when he calls the love of his life, who has and always will be straight. As his lover, Michael Benjamin Washington shows the slow hurt of bigotry, but with de Jesus being Hispanic, we see a different aspect of “PC” correctness. Tuc Watkins and Andrew Rannells are perfectly matched as Rannells fights for his independence and a chance at love. Charlie Carver is lovable as the present that brings beauty alone. Brian Hutchinson keeps us guessing as to where his allegiances lie. Then there is the subtle, yet layered Zachary Quinto as the party boy in decline, Harold. 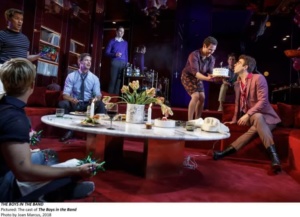 There are positive messages in this play if only we can open our eyes and see our reflections in these men and move forward.