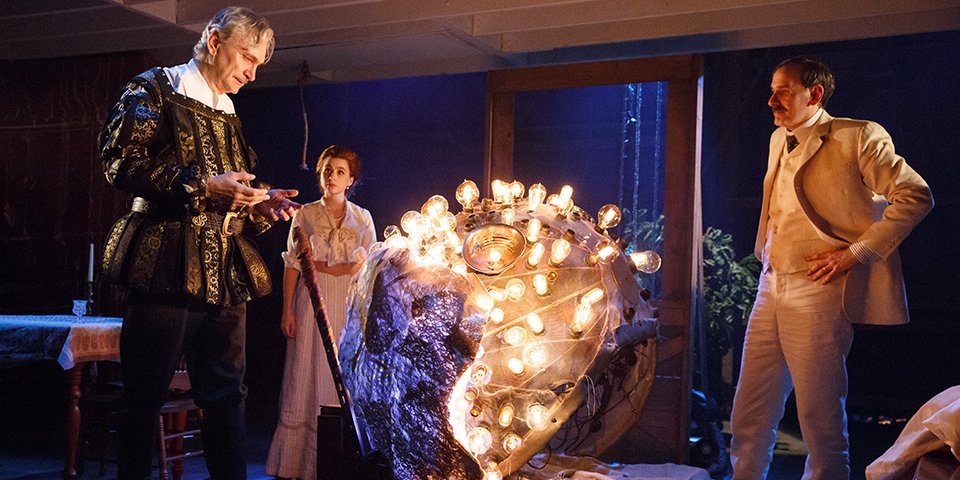 She Says: The Light Years Is A Magical Look At Times Gone By

She Says: The Light Years Is A Magical Look At Times Gone By 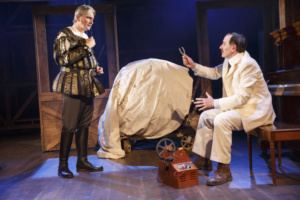 The Debate Society and Playwrights Horizons, invite us to enter another age in Hannah Bos and Paul Thureen’s The Light Years. We are transported back to the Chicago’s World Fair, 1893. Out guide is the theatrical impresario Steele MacKaye (Rocco Sisto), whose dream was to create The Spectatorium: an audacious, visionary 12,000-seat theater designed for the fair, but his funding ran out and it was never completed. Mr. MacKaye, was a playwright, actor, theater manager and inventor. Having acted, written, directed and produced numerous and popular plays and theatrical spectaculars of the day, he became one of the most famous actors and theater producers of his generation. Now-forgotten by this generation, he arrives by candle light to tell the tale of two families struggling to meet their future, and man’s indomitable spirit of invention. 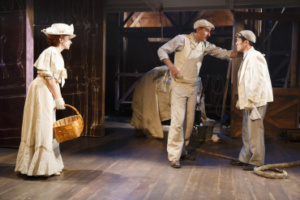 At the crux of this story is Steele’s loyal and dedicated, genius electrician, Hillary (Erik Lochtefeld) and his trusted assistant, Hong Sling (Brian Lee Huynh) who are building an illumination to dazzle in a time when nothing like this had been created. Needless to say there are electrical problems steaming from this new technology. Hillary’s adoring and progressive wife Adeline (Aya Cash), is embracing this new age, as she waits for the newest invention a bicycle. These two are truly in love and as fate will have it torn apart. 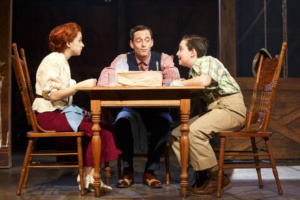 Suddenly, we are 40 years in the future and Ruth who bares an uncanny resemblance to Adeline is searching for work at the 1933 Chicago’s World Fair to feed and support her family. Her husband Lou (Ken Barnett) is a unsuccessful and frustrated jingle writer and their son, Charlie (Graydon Peter Yosowitz) desperately wants to go to the fair, but this family is barely making it. 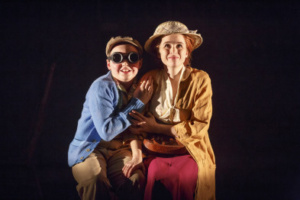 Time intertwines these two couples together as their lives pass back and forth in a romantic, yet magical way. In a way this play reminds me of Craig Lucas’s Prelude To A Kiss. 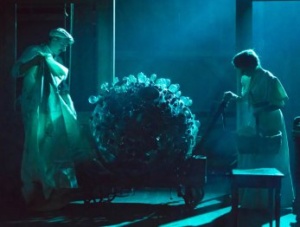 The cast is award winning with Ms. Cash superbly inhabiting both roles. As Adeline, she is adorable and fresh and we see why Hillary is so in love with her. As Ruth we ache for her spirit trying desperately to keep her families spirits up. Mr. Sisto is reminiscent of those larger than life theatrical men who ruled the boards. Mr. Lochtefeld is the epitome of a man obsessed with the future and desperately in love with his wife. Mr. Huynh adds the right balance. Mr Barnett is period perfect allowing us to see man’s failure and Mr. Yosowitz adds a wide eyed nativity and the eagerness of youth.

The sets by Laura Jellinek, costumes by Michael Krass, sound by Lee Kinney and terrific music by Daniel Kluger have done wonders. These elements along are award winning. The star of the show however is lighting designer Russell H. Champa, the man who brings worlds alive in a blaze of light and reminds us as long as there is light there is hope. Look for his name as well as others from this production around award season,

Bos and Thureen (co-writers of Amazon’s Mozart in the Jungle and HBO’s High Maintenance) have a way with dialogue, but not with endings. We see and learn so much, and are enrapt the whole time, but it is not the words that impress us in the end, but the spectacular lights, which Ruth never gets to see. Sadly what started out with a bang, leaves us empty and unfulfilled in the end.

Suzanna BowlingJanuary 18, 2023
Read More
Scroll for more
Tap
He Says: The Light Years: Sparks Fly and Than (Almost) Nothing
The Moors A Place Few Will Want to Visit