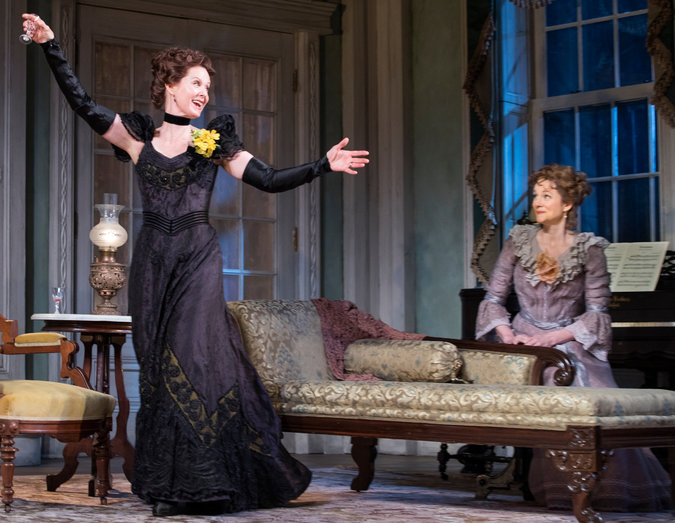 She Says: The Little Foxes A Master Class That Predicted The Future

She Says: The Little Foxes A Master Class That Predicted The Future 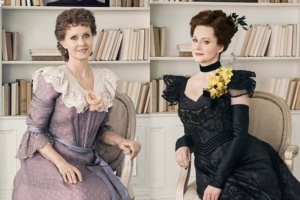 Lillian Hellman’s 1939 play The Little Foxes is a considered a classic of the 20th century drama and after seeing Manhattan Theatre Club’s version, I understand why. I rediscovered this prolific play first with Cynthia Nixon in the leading role of Regina and Laura Linney as Birdie. The next day they alternated and the result, lead to a master class in acting. I was so intrigued after the first performance, I immediately came home and watched the 1946 sequel Another Part of the Forest on youtube. 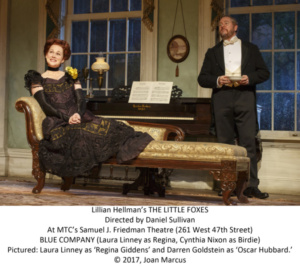 The set is gorgeously designed by Scott Pask. Justin Townsend’s lighting sets the mood and Jane Greenwood’s costumes are sublime. Expertly directed by David Sullivan this production is strong in every aspect. The Little Foxes seems to predict a future, that is here.

“There are hundreds of Hubbards sitting in rooms like this throughout the country. All their names aren’t Hubbard, but they are all Hubbards and they will own this country some day. Ben Hubbard 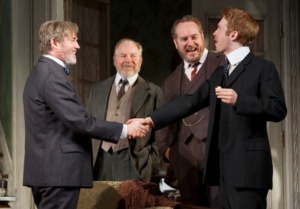 The play concerns the Hubbard clan and their manipulation of each other and those around them. Money is their God and there can never be enough of it. It is 1900 and the South has fallen, the Hubbard’s are the white carpetbaggers that have used all of this to their advantage. The aristocracy has fallen and the foxes have take over.  The smartest and the most conniving is Regina (Linney and Nixon), who at a time when men rule, has learned to out fox them all. Her brother Ben (Michael McKean), is a force to be reckoned with, for he is the fox in sheep’s clothing. He is the older brother use to being  in charge. He and Regina are formidable partners having been sparring with each other for years. The last sibling is the cruel, greedy, not so bright and foolish Oscar (Darren Goldstein) who is the sly fox. Oscar married Birdie (Linney and Nixon), a once refined sweet tempered innocent left over from the Southern aristocracy. Berated and abused, Birdie has turned to alcohol for relief. Birdie finds solace in Alexandra (Francesca Carpanini), Regina’s daughter, as she despises her own son Lou (Michael Benz), who is more like his father than her.

At the height of the conflict is the past. Oscar married Birdie, strictly to acquire her family’s plantation and more importantly the cotton fields. Now the trio wants to construct a cotton mill and rape the hen house so to speak. Needed is $225,000.00. Ben and Oscar have their portion but Regina, needs her investment. Regina has been scheming to get her sick husband Horace (Richard Thomas) to come back home and make her dreams of becoming rich come true. The siblings fight over who’s to get the biggest share of the company as they pull cutthroat tricks on each other. Verbal cat-and-mouse games continue, as greed consumes them all. At the crux of this is the proposes marriage between Leo and Alexandra—first cousins. When Horace and Alexandra find out they are repulsed and Horace refuses to give Regina the money. Leo, a bank teller in Horace’s bank steals Horace’s railroad bonds from his safe deposit box. When Horace find out, he gleefully plays his last hand. Addie (Caroline Stefanie Clay) the maid, makes the most profound statement of all, which allows Alexandra freedom. “There are people who eat earth and eat all the people on it like in the Bible with the locusts. And other people who stand around and watch them eat.” In the end nobody wins. 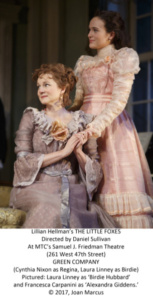 Laura Linney’s Regina, is composed using her smokey tones to draw you in. She is deadly, confident, strong and a force to be reckoned with. Her Regina is one in complete control and who lures her victims with acidic sweetness. With Linney in charge, Cynthia Nixon’s Birdie, is a mouse for this cat’s enjoyment. Nixon plays Birdie as cornered and nervous, knowing she is doomed, but uses every ounce of strength to fight for life. When Birdie finally breaks down we see Birdie’s last stand and the past that can never be recovered. It is heartbreaking.

Nixon’s Regina is a skilled manipulator, whose cold detachment is chilling. This Regina is deadly and formidable. There is such a stark contrast in Linney’s Birdie who has retained her innocents. Linney uses the alcoholism to remember and stay locked in the past. Nixon’s Regina doesn’t use this Birdie for her pleasure, but ignores her like she does not exist. 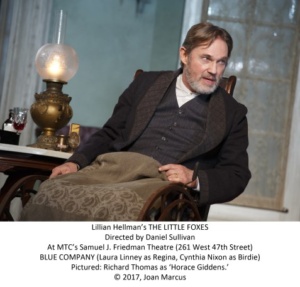 Richard Thomas is the breakout performance. His superb interpretation brings morality, frailty and the last stand of one who knows he has nothing else to lose. Michael McKean also brings a subtle snake-like charm to the stage. The cast is all at the top of their game and this is a splendid production.

In the end Horace states: Maybe it’s easy for the dying to be honest. I’m sick of you, sick of this house, sick of my unhappy life with you. I’m sick of your brothers and their dirty tricks to make a dime. There must be better ways of getting rich than building sweatshops and pounding the bones of the town to make dividends for you to spend. You’ll wreck the town, you and your brothers. You’ll wreck the country, you and your kind, if they let you. But not me, I’ll die my own way, and I’ll do it without making the world worse. I leave that to you.