She Says: The View UpStairs Where The Past Longs To Be Heard

She Says: The View UpStairs Where The Past Longs To Be Heard

For That Strength You Pay A Price.
That’s Just Reality In 1973.
You’d Better Stop Bein’ So Wide-Eyed.
This Is A Battle Firing From All Sides And We’ve All Been Wounded, Some Have Died. The Best Revenge Is Just To Stay Alive. 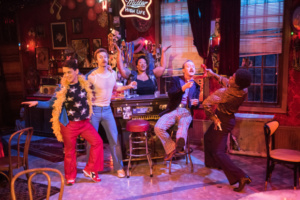 Max Vernon’s thoughtful exhilarating new off-Broadway musical The View UpStairs, brings back to mind all those friends who died from HIV/AIDS. In my youth, I use to sneak out of the house to go to bars and discos with my friends, back in late 70’s, early 80’s. Tonight the bar where the show takes place not only brought back life the UpStairs Lounge in the French Quarter of New Orleans, but to those etched in my memories living and dying. Shout out to Brad and Stacy! 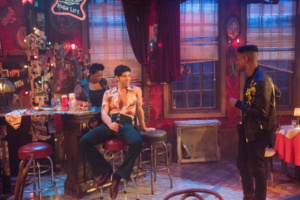 The View UpStairs is based on a true life event, that until last night I did not know about. In 1973 a gay bar that doubled as the home for the pro-LGBT Metropolitan Community Church was set fire to and thirty-two people died, while fifty more were seriously injured. It was the biggest attack on gay lives by what is thought to have been an angry gay man. Nobody cared that this had happened and some of the family members were terrified to claim their bodies, in fear of losing their jobs, apartments and more. The arson occurred on Pride Sunday, yet pride back then was a silent prayer. 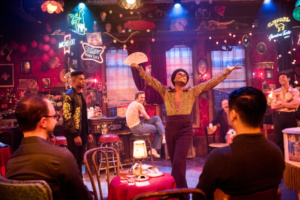 You enter the Lynn Redgrave Theater at 45 Bleeker and are transported back to a kitschy 70’s gay bar where a nude Burt Reynolds centerpiece is hanging and a phallic chandelier is dangling above your head. There are tables where some audience members sit and a piano that has seen better days with icons of the day pasted on for decoration. Wes (Jeremy Pope) a budding fashion designer, has just bought the building. Suddenly he is transported back in time to The Upstairs, the night before it burnt down. Anyone who lived through these times, has been in a bar like this. Here we meet proprietress and den mother Henri (Frenchie Davis), married piano player/bar entertainer Buddy (Randy Redd) who hasn’t come out to his wife or children yet. The handsome Patrick (Taylor Frey), is a hustler scarred by his first lover being “cured,” who finds a moment with Wes. The flamboyant transgender Willie (Nathan Lee Graham) entertains to pass the time. Freddy (Michael Longoria), is a young Latino drag performer whose support from his mother Inez (Nancy Ticotin) gives hope. The preacher Richard (Benjamin Howes), tries to get the community this group has built, to offer unconditional love against the hate. They have been repeatedly been attacked by resident cop (Richard E. Waits.) Rounding off the cast is Dale (Ben Mayne), a hustler who resents not being noticed. 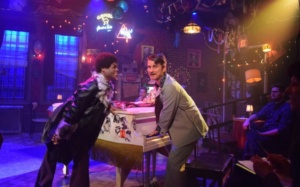 Vernon’s music is infectious and I dare you to see this show without dancing in your seats. The melodic structure is old, yet with a fresh take and melodies that go into uncharted territories and urges the audience to journey along for the ride. The lyric’s hit home and though at times political it makes a strong point as to why the LGBT community is afraid and willing to fight back against the current political climate. The script though a fairy tale of sorts, hits home. Kevin, Brian, Brian, Dennis, Mark you all still live in my heart and I will always remember the music, dancing and the good times. 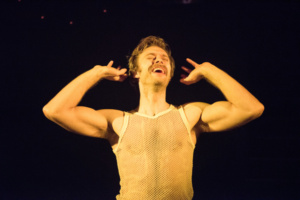 Director Scott Ebersold, keeps this show sparkling and though we cry, we are not called on to be maudlin, but are brought to the point where we can not forget.

The cast is energetic and each individual has moments of shinning bright and making their mark. I loved discovering Mr. Frey, who is like a 24 year-old James Barbour. Mark my words this is one of the next leading men on Broadway. Mr. Longoria breaks free in “Sex On Legs” and has the audience roars in laughter. Mr Graham is simply ….fabulous and well French knocks her numbers out of the park. Just because I am singling out these individuals, does not mean the whole cast isn’t marvelous, because they are.

The choreography by Al Blackstone brings back those days of last dances. The costumes by Anita Yavich are stupendous and I want Freddy’s black dress. The set by Jason Sherwood is exceptional made hauntingly eerie by lightening designer Brian Tower.

The clash between those living the nightmare that they made into a good time and Wes who thinks being gay is seeing your rights acknowledged is made searingly clear. When attacked by the police the patrons sing “The World Outside These Walls.” For them The Upstairs is their solace, so when they are trapped and burnt to death, by what seems one of their own, it is heartbreaking. The man who is thought to have caused this tragedy took his own life the following year.

The View From UpStairs is an uplifting reminder of our past. Maybe if audiences around the country saw this piece, understanding could commence.