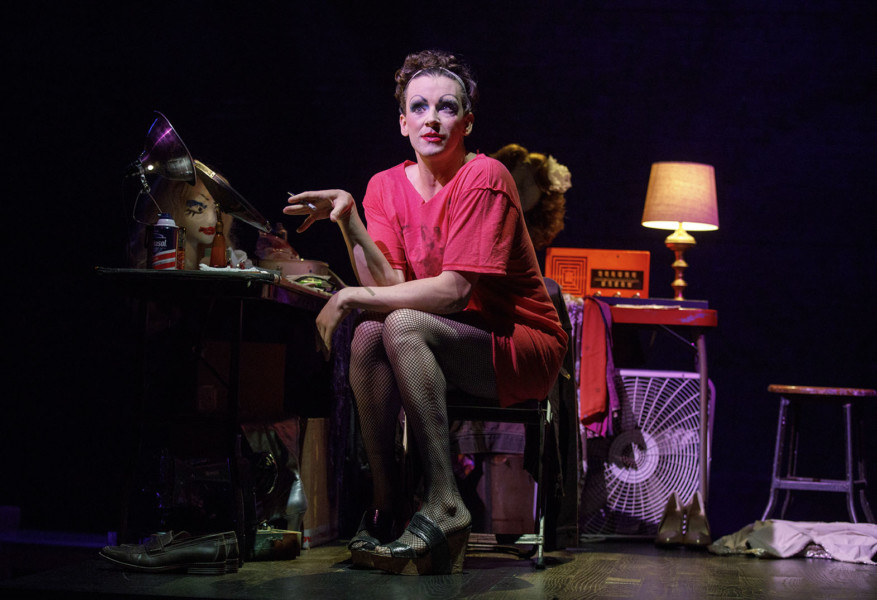 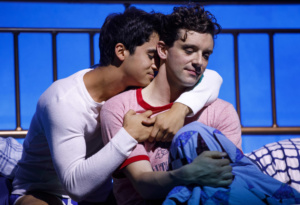 I missed the original production of Torch Song, as well as the movie. Last night watching Michael Urie as Arnold dish on what it is like to be a drag queen, a gay man looking for love, acceptance, desire and all the things that straight couples had in the 70’s was touching, poignant and revelatory. We forget the struggle, the unacceptance, the hiding, the hoping for marriage or at the very least to chance to introduce your loved one to your parents, without all hell braking loose. The 70’s was still filled with hate and misunderstanding of anyone being different. As Arnold (Urie) applys the make-up, the hair, the glittery dress and the heels, he strips off the camouflage and lets us into his wants, desires and his dreams. He yearns for the love but believes he will end up singing a touch song at the end of his life. Arnold  just wants it to be the best one ever sung. 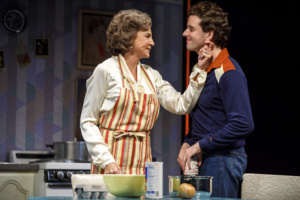 Enter the night Arnold meets Ed (Ward Horton) in what is titled the International Stud. In the beginning Ed comes onto Arnold at a gay bar where the back room is the place to end up. Arnold wants more and the two end up together, until Ed tries to distance himself. Arnold refusing to allow that, calls him, to find out he is involved with a women. Arnold does not take no for an answer and confronts Ed on his refusal to come out of the closet and his dishonesty to Laurel (Roxanna Hope Radia). This is to become a series of unrequited episodes between Arnold and Ed. At the end of  International Stud, Arnold makes it into the backroom to hilarious and somewhat disheartening results. 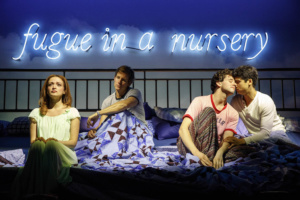 The second chapter is titled Fugue in a Nursery, and it is now one year later. Laurel and Ed are married and Ed has confessed his affair with Arnold. Arnold is now involved with the younger Alan (Michael Rosen). Laurel wants insight into the affair, Ed still wants Arnold emotionally, but will accept a fling with Alan and Arnold loves Alan, but will always be in love with Ed. In this musical chairs weekend in the country, nobody truly wins. 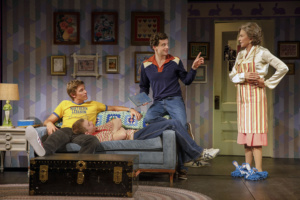 The third part Widows and Children First! which takes ten years later is what the show is leading up to. Arnold is trying to adopt the troubled Nick (Jack DiFalco), Arnold has left his wife and Arnold’s Jewish Mother (Mercedes Ruehl) is in for a visit. Arnold and his mother’s relationship is troubled. Both love each other, but Arnold’s mother though she loves him, does not truly accept him. Their confrontation will break your heart. As Ma turns her back on her son, Ed finally declares his love and Nick dedicates the song “I Will Never Turn My Back On You“ in a circle that love lives on, as does hope.

Torch Song, written by Harvey Fierstein was orginally presented as three separate one act plays, International Stud, Fugue in a Nursery and Widows and Children First! Reworked into a four-hour theatrical event, Torch Song Trilogy moved from La Mama to the Actors’ Playhouse in Greenwich Village, to Broadway at the Little Theatre, where it ran for 1,222 performances. It won two Tony Awards for Fierstein for Best Playand Best Performance by a Leading Actor in a Play. 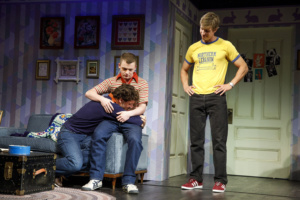 Michael Urie is endearing as this Jewish gay man paying tribute to Fierstein. His gravelly vocals capture vulnerability, disillusionment, comedic cynicism and anticipation for that illusive piece of happiness. He is definitely on my list for Best Actor in a play this year. It is a remarkable performance by an amazing talented actor, who has pulled off two fabulous performances this year. One of my favorite performance is by Jack DiFalco, who lets us see the love that can hide underneath layers of wounds and how youth can bounce back despite  the pain that has been inflicted. Mercedes Ruehl is the perfect mother we love to hate for her unacceptance. Ruehl is the perfect blend with Urie and their fights are torturous because they seem so real. Ward Horton, Roxanna Hope Radia and Michael Rosen are all perfectly cast and bring the required layers to their performances.

Torch Song, written by Harvey Fierstein was orginally presented as three separate one act plays, International Stud, Fugue in a Nursery and Widows and Children First! Reworked into a four-hour theatrical event, Torch Song Trilogy moved from La Mama to the Actors’ Playhouse in Greenwich Village, to Broadway at the Little Theatre, where it ran for 1,222 performances. It won two Tony Awards for Fierstein for Best Play and Best Performance by a Leading Actor in a Play.

Torch Song is a love song to the past, which needs to be unearthed to each generation who thinks being gay is so easy. It wasn’t and it is people like Arnold why this generation has it so easy. Treat yourself to this production, you will be glad you did.

Suzanna BowlingJanuary 20, 2021
Read More
Scroll for more
Tap
Billy and The Killers To Rock and Not Enough Roll
Daryl Roth and Linda Winer In Conversation Part 5