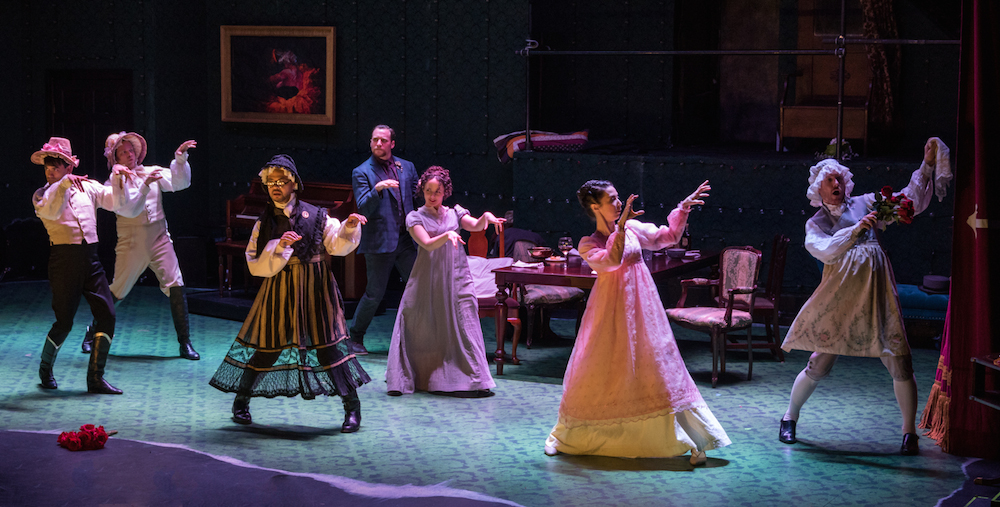 She Says: Vanity Fair a Thriller of a Time

She Says: Vanity Fair a Thriller of a Time 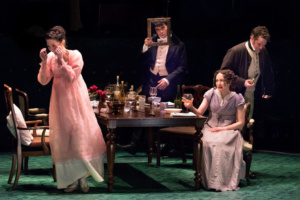 No matter what you think of the rather long Vanity Fair, the Pearl Theater production has a cast that is extremely talented. Helmed by Bedlam artistic director Eric Tucker the show is also well directed and lures you in it’s carnival like atmosphere thanks to set designer Sandra Goldmark. 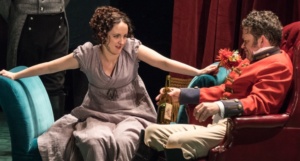 Actress and playwright Kate Hamill has penned the adaptation of William Makepeace Thackeray’s 1848 novel. She also plays the cunning and devious lead Becky Sharp. Ms. Ms. Hamill previously adapted the 2014 Jane Austen classic Sense and Sensibility, which was a hit for Bedlam. Like Sense and Sensibility, there is a breakneck speed to the material along with camp moments, but this time there is much more meat to the piece. Smartly Ms. Hamill gives us a MC of sorts in Zachary Fine who smooths away the rough patches. He leers and seduces like a barker whose questions mask an evil that lurks around every corner. 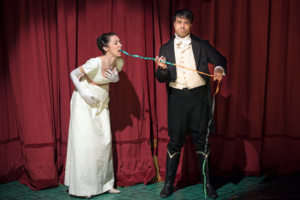 We are introduced to the penniless, strong-willed, Becky Sharp determined to make her way in society. She is just leaving the finishing school, where she was basically enslaved as a charity pupil. Now doomed to be a governess, Becky uses her best friend Amelia (Joey Parsons) to escape this trap. First she tries to seduce Amelia’s chubby boorish brother (Morgan Hooper at the performance I saw, normally played by Brad Heberlee), but Amalia’s fiancé, the self obsessed Captain George Osborne (Debargo Sanyal) foils that. Next Becky sets her site on her married boss (Hooper again), but fate has his sister (Ryan Quinn) relieving her from that fodder, until she snares his son (Tom O’Keefe) and everyone is disowned. In the meantime Amelia’s father has gone bankrupt, her fiancé’s father has made him dump her and his best friend Captain William Dobbin (Quinn again) is madly in love with her. Dobbin’s gets George to marry her and again everyone is disowned. 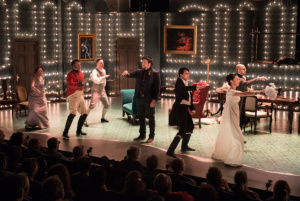 The cast Photo by Russ Rowland

Act two shows the rise and fall and the debauchery of Becky, as well as the goodness and shortsightedness of Amelia. In the end Becky does something kind and Amelia finally sees the love that has been waiting for her all along.

Ms. Hamill embraces Becky’s wickedness un abashedly. Mr. Sanyal indulges his acting chops as does Mr. Hooper and Mr. Quinn. Ms. Parsons is perfect as the bland Amelia. Mr. Fine exudes the evil that lurks behind money and power and O’Keefe shows reception and misguided love. This is entire cast is flawless.

Mr. Tucker loves to add dance sequences using popular songs, which this time include “Thriller” and “Single Ladies,”which don’t exactly work. Maybe different songs that add to the drama would have been more effective. His staging is so interesting with whirling furniture to keep that carnival like atmosphere. The whole show feels like one side show to the next.

Vanity Fair is a long novel, as is the show, Ms. Hamill book could use some cutting as the show doesn’t always flow. Sometimes all the tomfoolery needs to be honed just a little bit more, instead of let loose with such abandoned. If they do this who knows how successful they could be. Ms Hamill, Mr Tucker and this cast are definitely artists to watch out for.