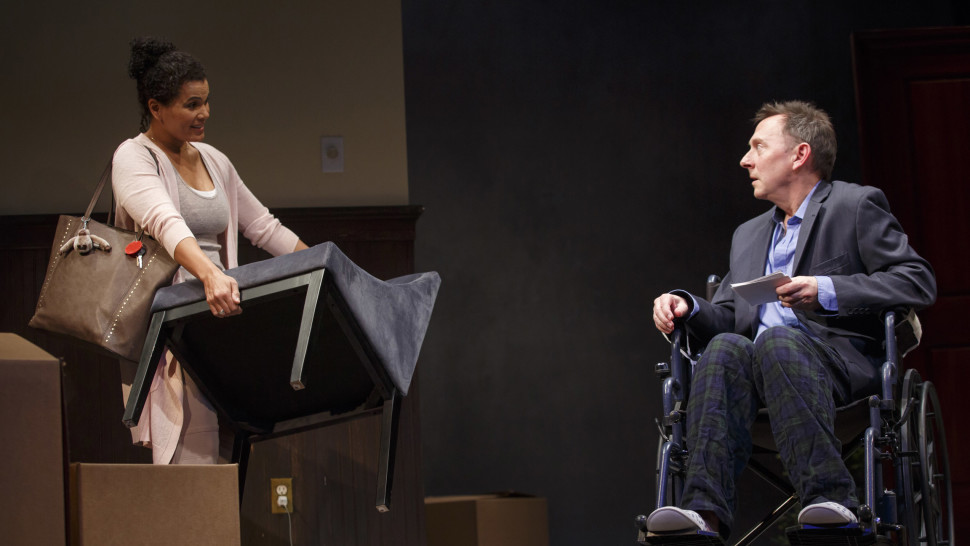 She Says: Wakey, Wakey is Sleep Inducing Except For The Sound Design

She Says: Wakey, Wakey is Sleep Inducing Except For The Sound Design 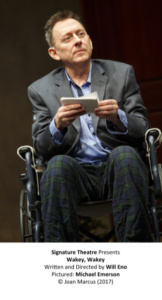 You know it’s bad when the person behind you says out loud “quit apologizing” to the actor onstage several times. Will Eno’s Wakey, Wakey at the Pershing Square Signature Center, is about death, life and things in between and in all honesty we’ve heard it all before.

The play starts out with Guy (Michael Emerson) on the floor, suddenly he is in a wheel chair lecturing us, but about what I have not a clue. Endless clutter that we now are subject to, as the character rambles on and on.  Apparently Guy has suffered a stroke, but he can talk, walk or rather shuffle and drinks out of a teeny tiny juice box. He has a sandwich, which it seems he can not eat. I know the show is scripted but for all intensive purposes it seems like he is making it up as he goes. More rambling, until his caregiver (January LaVoy) arrives to offer kindness. After seventy-five minutes he dies and the party of his life happens as balloons fall, small gifts are given, refreshments are served. At one point Guy states the show was going to be three hours long and I personally almost had a stroke.

Basically the whole plot is to enjoy the little things in life.

Emerson is wonderful in the role, but the play is monotonous and the women was right “quit apologizing” for living.

Will Eno also directed this and he does his play an injustice. Maybe another director could have added life into this piece instead of oblivion.

Again the sound design by Kevin Steinberg is at a decimal point that aspirin is needed after seeing this production. Is this some new philosophy where we know you are going to fall asleep in our show, so we are going to make sure this doesn’t happen, so we are going to turn up the volume? This is the third one this week.

Kudos to video designer Rocco DiSanti cwho at least offered us some reprove from monotony.