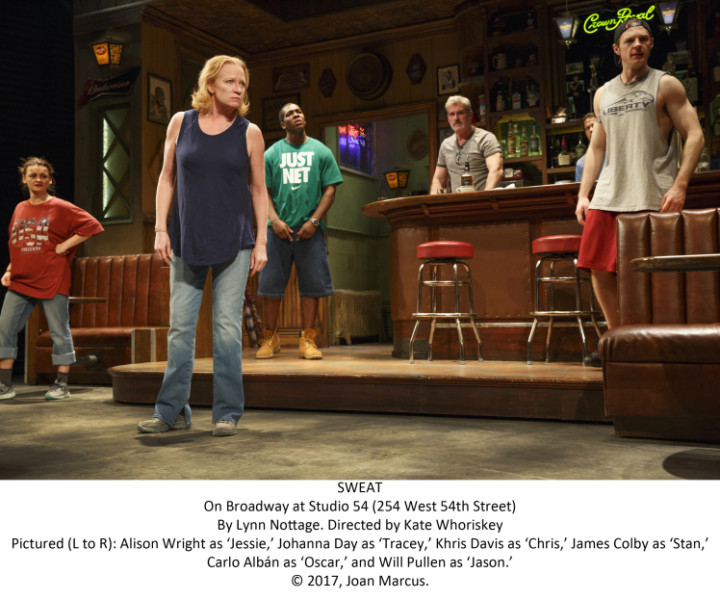 She Says: Who Really Wants To Sweat?

She Says: Who Really Wants To Sweat? 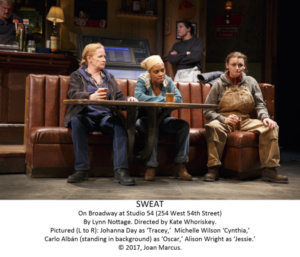 When Pulitzer Prize winning Lynn Nottage’s Sweat played at The Public Theatre earlier this year, I missed it due to an injury and gave my ticket to another reviewer. She felt that it was timely, yet predictable and had a better play trapped inside what she saw. After seeing the show last night, I have to agree. 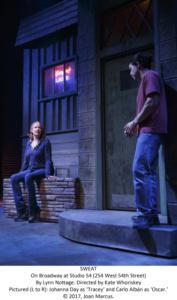 The first act is so slow and talky, my guest wanted to leave and I made him stay. From the beginning we know something bad has happened, but what is the question. Here we meet rebellious Jason (Will Pullen), whose face is tatted and the now “saved” Chris (Khris Davis) who is clean cut and repentant. The two men are being released from prison after eight years and are being interviewed by their parole officer (Lance Coadie Williams). As Jason and Chris try to reestablish their lives Tracey (Johanna Day), Jason’s mother has turned to heroin for escape, as Cynthia (Michelle Wilson) Kris’s mom is still trying to better her life. 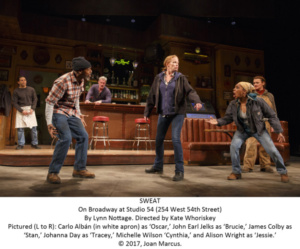 We have been dropped into a bar in Reading Pennsylvania and the heart of working-class America. Stan (James Colby) the bartender is serving his regular customers; Tracey, Cynthia and Jessie (Miriam Shor), friends who all work the line at a factory together, as did their families for three generations. Their entire life is work and drinking, except for Cynthia who has made it out of the line, to supervisor. The town is in denial as rumors fly about the factory wanting to cut their pay and benefits or pull out and just leave. Stan tries to warn them with “You could wake up tomorrow and all your jobs are in Mexico.” Cynthia also tries to buffer the reality, but the workers believe they have the upper hand. As the workers are all shut out of the factory, minus Cynthia, they become incensed, when Oscar (Carlo Alban) an immigrant bar back takes a job as a scab to better his life. Egged on by his mother Tracey, Jason’s anger is fueled.

Kate Whoriskey’s direction is ploddingly slow in the first act, but picks up in the second.

John Lee Beatty’s set is realistic and you feel as if you are in a bar somewhere that time has forgotten.

Nottage has based Sweat on extensive interviews with people in Reading and though much of this show is believable, who seriously wants to watch this? I don’t mean to sound heartless, because this is a reality for some parts of the country. Sadly we never really get to know the personal relationships of these characters, such as why does Cynthia incite her boy to violence? Where does this anger stem from? Was she always this prejudice? These are people who think drinking is the national past time and when that fails, heroin and violence is the answer. There is also the implausible ending (spoiler alert). How after eight years is your hand still bandaged? How does the person who was severely beat up, end up ok and the one who hits his head, completely disabled? Maybe there is an analogy for this, but it was completely lost on me.

This may be an important play, but I do not see this drawing an audience, despite any awards it may receive.