She Wanted to Dress Up New York, In Memory of Dana Lorge

She Wanted to Dress Up New York, In Memory of Dana Lorge 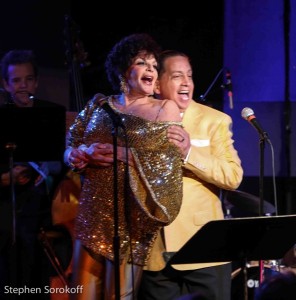 When I was asked to write a piece about Dana Lorge just a few days after she passed out of this life, I knew immediately what I must do. I called on four of her dearest friends and set up interviews with each of them. I knew Dana, but not well enough to pay her life tribute to the magnitude she so clearly earned. From these interviews and the many comments on social media following her death, as well as the stories from people in her inner circle and, finally, my own interactions with her, I have discovered overwhelmingly common threads culminating in one truth: Dana’s legacy is spectacular: generosity, kindness, humor and beauty. Dana Lorge was the embodiment of love freely given, and the recipients of that gift understand just how fortunate they are. 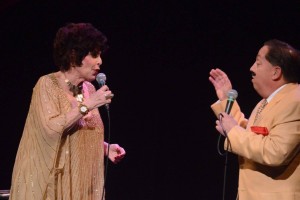 Warren Schein met Dana in the early seventies, when she was hosting a variety show at The Pan Am Motor Inn on Queens Boulevard. Schein was doing stand up at local temples or Catch a Rising Star with no real career direction in sight. He worked up the courage to approach Dana, who he remembers was wearing “an amazing western outfit, all red and sparkly.” Schein relayed that Lorge’s motto was, “it doesn’t matter how you feel. It’s how you look.” “So,” Schein said, “ there I was, this twenty-something nebbish with no clue.” Within several months, Dana had selected and taught him a repertoire of songs and had her arranger create Schein’s charts for an eleven piece band. “How am I going to pay for this?” Schein worried. “We’ll figure that out later,” said Lorge. She took him to to The Caribbean for three weeks and he ended up entertaining there for six months! She invited him to co-host her variety show at The Metropolitan Room. “She’s been my best friend, my sister, my confident and my mentor. Any little bit of success I’ve enjoyed is due to her friendship and mentoring. When we performed together on stage there was this dynamic connection. Audience members would often tell
us after a show, ‘watching the two of you on stage together having so much fun, makes us feel happy.’ ” 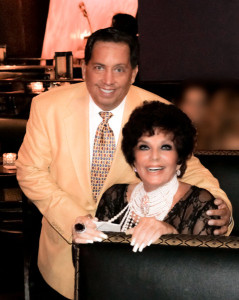 Richard Skipper met Dana more than twenty-five years ago at a party, where they sat together on the sofa and felt immediate chemistry. “She was very glamorous,” Skipper says with a smile, “always perfectly put together and invested in how all the performers in her shows looked as well.” Richard asked Dana to co-host a variety show called Wednesday Nights at the Iguana. “Dana and I had a loving and sometimes volatile relationship. Once she called me her clone, and we all know how very similar personalities can clash.” Though sparks flew professionally and Richard bowed out of the Wednesday night shows, his relationship with Dana remained close. “Look, I’m not going to lose a friendship over a show and, quite frankly, Dana soared on her own. It was lovely to see.” Richard and his husband Dan continued to have Dana as a frequent guest in their home, Richard sang in her final show at The Iguana, and he and Dan visited her just four days before her passing. “She was larger than life,” Skipper said quietly, “and lived for the stage.” 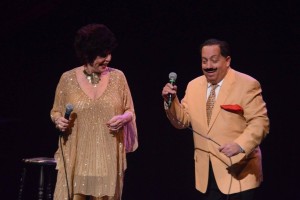 Bernie Furshpan and his wife Joanne, owners of Manhattan’s Metropolitan Room, met Dana just over four years ago when she was looking for a new home for her variety show. Bernie remembers liking Dana immensely upon their first meeting. “She made direct eye contact, and she made me laugh…and she had this bag with a huge clock sewn into it. She had her own style.” Joanne remembers meeting Dana and saying, “My God you’re beautiful” to which Dana replied, “I know, I can’t help it.” Joanne turned to Bernie and said, “I’m going to love this woman.” And love her they did, with a friendship that was comprised of daily phone calls, trips to social clubs for ballroom dancing, intimate dinners and endless laughs. At the end of our interview, Bernie said, “I think Dana, Joanne and I share a similar philosophy: live for the moment and be kind. Dana was generous, always giving things to people, always looking fabulous. She simply wanted to dress up New York.” 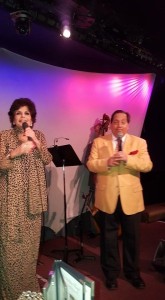 Sue Matsuki has known Dana for well over a decade, and experienced no shortage of superlatives in which to describe her beloved friend. “Generous, kind, wild, talented, funny, glamorous, va-va-va voom figure, sparkly, leopard (she loved her leopard print), a fiercely loyal friend, mentor, sister, intelligent, an era of a “broad” frozen in time, a sit-com waiting to happen, an actress, a tour de force performer and an energy and life force we will never see again. She was as unique a human being as anyone I have ever met.” Sue reported that when Dana was first diagnosed two years ago, and asked about the prognosis, her reply was, “Oh, don’t worry, I can’t die yet. I have clothes in my closet with the tags still on them, and they’ve got to be worn!” “That,” said Sue, “was the quintessential Dana, facing life head on, but with humor.” The cabaret community loved her, and there are countless people wearing jewelry, ties and shirts that she lovingly bestowed on them. “Dana left us on her own terms, exactly as she’d planned: in full make-up with her lashes on.” 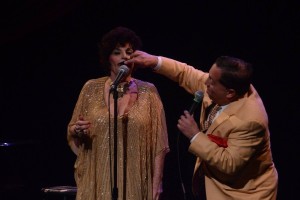 If it’s true that love and respect are a measure of a person’s wealth, then Dana Lorge is the daughter of Midas, the richest woman in town. Her spirit is carefully protected and nurtured in the hearts of her inner circle and all those who knew her. She took the secret of life, dressed it in sequins or a leopard print, put it on stage and encouraged it to sing…oh, and to make em’ laugh. 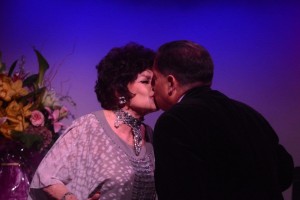 The song “Everything Possible” by Michael Callen and the Flirtations ends with a chorus: “And the only measure of your words and your deeds will be the love you leave behind when you’re gone.” The great lady, the hilarious broad, the determined entertainer and fast friend who is Dana Lorge lived a glorious life. And, like a truly spectacular show, she left us all wanting more.

Carolyn was graduated from the Peabody Conservatory of Music, where she earned a degree in Opera Performance. Immediately after graduation she toured with a critically acclaimed jazz ensemble, Quick Step, sang for a season with the Tri-Cities Opera Company, and performed leading roles with regional theater companies including Ann, A Little Night Music, Maria, West Side Story, and The Leading Player, Pippin, to name a few. In between those gigs, she was a waitress. In search of a definitive genre for her performance career, Carolyn found her way to Provincetown, MA where the musical director who would change her life, the late Richard Weinstock, owned a restaurant and cabaret club, Rick's Provincetown. After hearing Carolyn sing a broad repertoire – classical to show tunes to jazz to original songs, Richard asked the question that made it all come clear: "Why not do it all, just be yourself, and call it Cabaret?" Carolyn spent the summer coaching and performing with Richard and sitting nightly in the audiences of cabaret greats like Sharon McKight, Jay Rogers and Ann Hampton Callaway – all with extended bookings at Rick's Provincetown. Finally knowing exactly what she wanted to do, Carolyn also chose exactly where she wanted to do it: New York City. Carolyn's first solo cabaret show in New York City garnered her the Outstanding Female Debut Award, from the Manhattan Association of Cabarets and Clubs (MAC) and was presented to her by Liza Minnelli. Shortly after, Carolyn won the Nightlife and BackStage Bistro Awards for Outstanding Female Vocalist. She graced the cover of Cabaret Scenes Magazine, won the Cabaret Hotline Top Ten CD Picks of the Year for her recording Reveille, won the Siegel's (then the Two of Clubs) CD Pick of the Month, presented to her by David Friedman. Carolyn has taken her shows, full of comedy and a wide-range of musical styles, to the Plush Room and Martunis in San Francisco, Davenports in Chicago, the Firebird and Feinsteins at the Regency in New York, and other cabaret venues from Seattle, WA to Rockland, ME. She is featured on the Original Cast Records Label in "The Johnny Mercer Jamborree." Her recent recording "Carolyn Montgomery-Forant Celebrates the Great American Songbook,” her award winning recording “Reveille," and her latest recording “Visible Phoenix” with Jon Weber and The Fine Whine, are available on Amazon.com and CD Baby. Carolyn is a featured singer on the recording that accompanies the popular children's book "Humpty Who?" by author Jennifer Griffin and available at www.basbleu.com or Bas Bleu at Amazon.com. In 2006, Carolyn took an hiatus from the stage to raise her son to school age, as well as open and operate her own restaurant, Cafe Forant, on the West Side of Manhattan. For seven years this hip and hopping little cafe (as well as a hip and hopping little boy, Eli) kept her beyond busy. During that time, she managed to squeeze in commercial voice-over work and the occasional cabaret guest appearance. Carolyn returned to the stage full time in January, 2014, producing and appearing in an all-star studded extravaganza at the Jerry Orbach Theater to benefit the Nightlife Awards (including Charles Busch, Julie Halston, Greg Edelman, Jane Monheit and Bill Irwin). In nine short months Carolyn has co-starred in the hit show Dirty Little Songs at 54 Below, been a featured performer at Town Hall in the Broadway by the Year Series, appeared at Lincoln Center with Steve Ross, starred in The Amanda McBroom Project at the Studio Theater (directed by Broadway's Arthur Masella, co-starring Mandy Gonzales, Lacretta Ross, Karen Akers and KT Sullivan) and taken her show Visible Phoenix to London, Chicago and San Francisco. In 2015, Montgomery-Forant garnered a rave review in the New York Times (see press) and presented Visible Phoenix at the Laurie Beechman Theatre in New York City for a full year, under the music direction of Jon Weber (NPR Piano Jazz). She has also conceived, with co-writer Jeff Cubeta, The Rise Tour, during which they will travel to 24 cities in 12 months presenting an original choral piece based on Maya Angelou’s poem Still I Rise with choruses throughout the United States, to raise money for the Mathew Shepard Foundation. The Rise Tour will premiere in Denver on December 3, 2015 and run through December 2016. Her series Stronger Stuff: see what happens when women help other women in a changing social and cultural age, will feature women artists of all varieties throughout 2016 in New York City. Thus far the series features Love Comes in Lavender, a benefit for LGBTQ Youth*, Dawn Derow in her classical Cabaret Legit at the Laurie Beechman Theatre* and Christmas Carolyn at Etcetera, Etcetera Restaurant*, featuring a number of talented women singers. Carolyn lives on the West Side of Manhattan with her family and is committed to an organic/slow food/eat locally lifestyle. She practices Bikram Yoga and travels with her family to ski, hike, paddle and explore the great outdoors as much as she can. For the last decade, she has served as the director of this country's only free veterinary clinic. Her blog, "Invisible Phoenix," is dedicated to the empowerment and inspiration of women over 40. Lest you assume Carolyn is just a simple Earth Mama in the habit of hugging trees, you should know she considers good wine a food group, plays poker with her child for high stakes, and (intelligently) looks to drag queens for make-up and fashion advice.