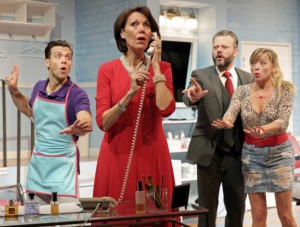 It took 36 years for Shear Madness to reach New York. This audience-participation murder mystery with franchises all over the country will be a hit with the outer borrows and New Jersey, but New Yorkers may just be a little to hip for this. What they will find fascinating is that Mrs. Shubert played by Lynne Wintersteller (original cast of Closer Than Ever) and Eddie played by Footlose Jeremy Kushnier have roles in this non musical. Pity they don’t sing.

The show takes place at the Shear Madness salon run by owner Tony Whitcomb (Jordan Ahnquist), a gay obnoxious queen and his assistant, Barbara DeMarco (Kate Middleton), a hooker type with brains from Brooklyn, who’s having a secret affair with Eddie (Kushnier). Undercover cops Lieutenant Nick O’Brien (Patrick Noonan) and Mike Thomas (Adam Gerber) are posing as clients among real clients socialite Mrs. Shubert (Wintersteller) and Eddie. When the upstairs owner plays too much piano all hell breaks lose and the concert pianist becomes the victim of murder as you the audience tries to figure it out.

If you weren’t paying attention during the set up, then you might have a problem with the rest of the show. After the intermission in which you can drink, Lieutenant O’Brien questions the audience and it really does become the audience’s choice. This portion becomes total improve on the part of the cast as none of the performers knows which one — will be voted the murderer by the audience. How much you enjoy the show becomes how interactive your audience is. I lucked out as my audience was mostly from Brooklyn and New Jersey and they were totally into it. They were as hysterical as some of the actors on stage.

The 1963 play is by German author Paul Portner and was adapted by director Bruce Jordan, who is also the show’s original producer. As far as murder mysteries go this is one of the better written. I have a chance to perform in several in Philadelphia awhile back, so I know the genre well. The improvisation skill are excellent and the topical quips up to date. Watching the actors try to crack each other up is also enjoyable. What is not up to date is the set by Will Cotton. We are supposed to be in a unisex hairdressing salon, at 50th and Ninth Avenue. Yet the prices are nowhere near what they would be. I know because there is a hair salon on 51st and 9th and I know there prices. This is a salon maybe 20 years stuck in time, yet we have jokes that put the time frame in the present.

Like Girl’s Night Out or Tony and Tina’s Wedding, there is an audience for this who will laugh out loud.

Suzanna BowlingJanuary 16, 2022
Read More
Scroll for more
Tap
Once Upon a Mattress Meet the Cast Part 1
Stephen Sorokoff – My View: Something You Will Never See At An Ann Hampton Callaway Show