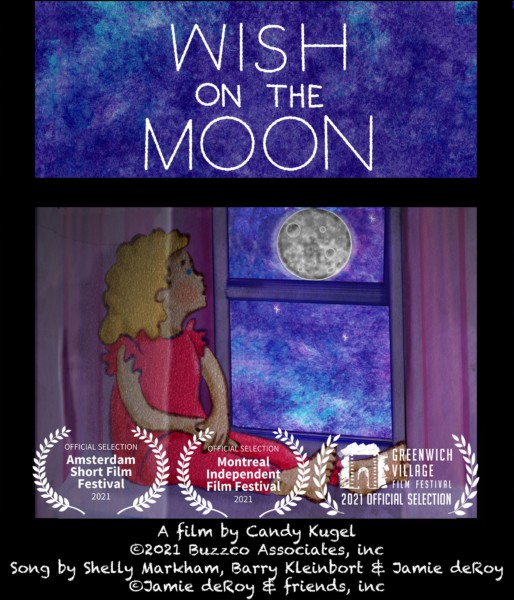 “Wish On A Moon” a film by Candy Kugel has gotten into ten film festivals, so far, with music by Shelly Markham, lyrics by Barry Kleinbort and Jamie deRoy and sung by Jamie. This sweet short film touches the heart.

20 years ago, Jamie was putting a CD together and she was missing a certain kind of song so Shelly Markham, Barry Kleinbort and Jamie wrote “Wish On The Moon.” Dee Hoty recorded it for “The Child In Me: Songs That Take you Back to Your Childhood, Volume 2”.

The song then made it onto Jamie’s solo album in 2011.

During the pandemic, Jamie had the idea to animate the song and now film festivals are calling.

Directed and animated by Candy Kugel and produced by Jamie deRoy & friends. The sound track was produced by Lanny Meyers and mixed and mastered by Danny Lawrence.

“Wish on the Moon” was accepted to the Greenwich Village Film Festival and shown at the Quad Cinema.

Let’s cheer Jamie on and watch the film festival circuit.