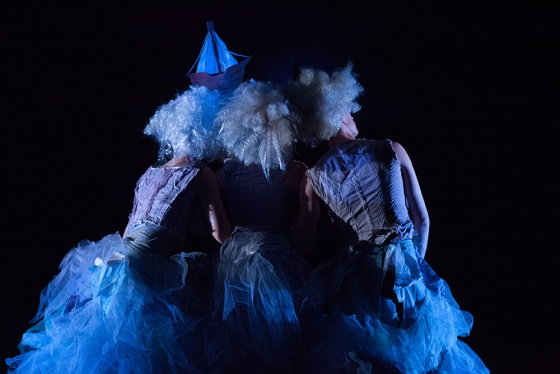 Ship of Fools: The Dark Voyage of Oppression

Ship of Fools: The Dark Voyage of Oppression 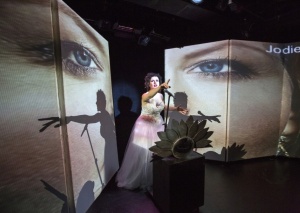 I was told we would be going on a journey, traveling through the history of misogyny, but the voyage was as real as it was concurrent to the present social climate as it could be. Oddly enough, Ship of Fools reminded me of the old-fashioned Disney ride, “It’s a Small World” but flipped over to the dark side of our world, with an assortment of complex themes surrounding feminism and suppression, and how it is to live in the female world.  We float around, past images and scenarios, taking them in, exploring our thoughts and reactions, and enjoying the ride. We are all on a small boat, floating, rotating, and being surrounded by complex visions and scenarios of the pathologized female. 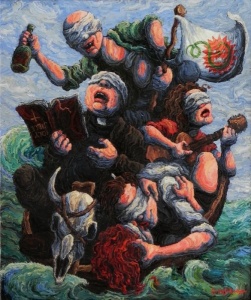 The Ship of Fools, the theatrical performance piece that is being explored here presented by HERE’s Dream Music Puppetry Program is an expansion of what theatre and performance can be. Using live music, spoken word poetry, puppetry, movement and a unique visual design, we travel through re-imagined moments in history. Engaging in themes of oppression with jarring fantastical images and scenarios (lighting design: Ayumu “Poe” Saegusa; sound design: Gavin Price); questioning the status quo, and our personal way of looking at the world. 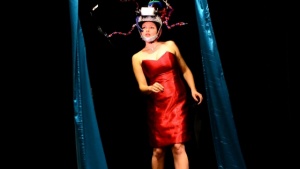 The ideas, images, and concepts floated before us are sometimes obscure and others more straightforward. Some are powerfully clear and some sailed over my head. Narrated by a talented vocalist/story teller/musician, Liv Davito, with the assistance from the other talented musicians, Eamonn Farrell, Alex Klimovitsky, and Gavin Price, we experience this Ship of Fools by examining the puzzle pieces showcasing ideas about female hysteria, modern depression, attacks on women’s health and reproductive rights, popular constrictive culture, feminism, and feminine rules of celebrity and politics. Conceived and devised by Jessica Scott with original music (Klimovitsky) and lyrics (Farrell), we are passengers through all sorts of dangerous water, with a band of performers (Jessica Weinstein/”the actress’, Kate Brehm, Liz Davito, Jacob Graham, Takemi Kitamura, Sarah Lafferty, and George Anna Tisdale) guiding us, hoping we, the audience, come out at the end enlightened and entertained.
This Ship of Fools, based on medieval engravings, is the metaphorical reaction to the practice of forcing the insane and unwanted to sail out into the ocean unguided and doomed. Ridding the community of the burdensome misfits, while relieving the community of guilt and shame.  With the current election rhetoric of hate, racism, xenophobia, and misogyny floating all around us, one can see how the politics of  exclusion is just another way for the powerful to exorcise themselves of undesirables, “dismissing them to the ocean where the tides determined their fate.”  We leave after our voyage with a wider world view, surviving the journey, and better for it.
For more go to frontmezzjunkies.com
Related ItemsDream Music PuppetryGeorge Anna TisdaleHERE'Jacob GrahamKate BrehmLiz DavitoNewOppressionSarah LaffertyShip of FoolsTakemi Kitamura
Off Broadway

Suzanna BowlingFebruary 20, 2021
Read More
Scroll for more
Tap
The Cherry Orchard Tears Down the Trees
Theresa Rebeck’s What We’re Up Against Could Not Be More Timelier