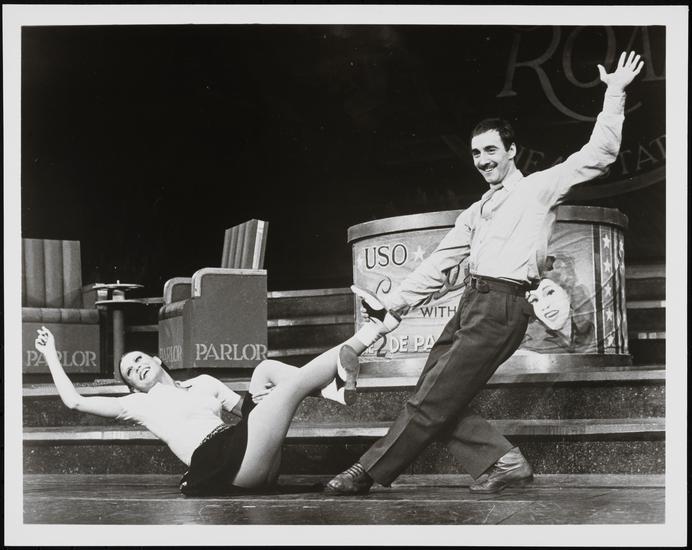 Ann Reinking was visiting her brother in Washington state when she went to sleep and never woke up.

Reinking got her start at the age of 12 in a production of Giselle with the English Royal Ballet. At the Seattle Opera House’s production of Bye Bye Birdie, Ann made her musical theater, but made her Broadway debut in 1969 at the age of 18 in the ensemble of Cabaret. From their she Graced the Broadway boards in Wild and Wonderful, came to recognition in Pippin and in Over Here! stole the show and won a Theater World Award. She was Joan of Arc in Goodtime Charley

Reinking replaced Gwen Verdon as Roxie Hart in Chicago next. When the show was revived Ann played the part again, winning the Tony Award for Best Choreography.

She was the replacement for Donna McKechnie as Cassie in A Chorus Line. In Dancin’ she took our breath away in Sing, Sing, Sing. She replaced Debbie Allen in a revival of Sweet Charity and returned to the stage after having a son in 1991 in the national tour of Bye Bye Birdie, costarring Tommy Tune. She choreographed a 1995 ABC television movie version of the show. She also helped to choreographed Tommy Tune Tonite!

In 1998, Reinking helped conceive and bring the revue Fosse to the stage, earning a co-nomination for the Tony for Best Direction of a Musical.

in film Reinking appeared in a role loosely based on her own relationship with Bob Fosse in All That Jazz. She also played Grace Farrell, in the 1982 adaptation of Annie and starred as title character Micki in 1984’s Micki & Maude. in 2019, when she was portrayed by Margaret Qualley in the FX series Fosse/Verdon.

Chita Rivera@Chita_Rivera·2hI’m beyond words to hear of the sudden passing of my dear friend #AnnReinking. Such a beautiful soul & talent. We met during the original CHICAGO & were close friends to this day. I so loved sharing the stage with her. Her spirit & #RazzleDazzle are w me always.

Liz Callaway@LizGoesOn·55mRIP #AnnReinking This “singer who moves” had the great privilege of working with her in “The Look of Love” on Broadway, but first saw her in Dancin’ and fell in love with her brilliance. What a loss. (With MD David Loud on opening night.)

Viola Davis@violadavis·1hRIP Ann Reinking. Thank you for your passion and brilliance.

Reinking is survived by her husband, Peter Talbert, and son Chris.

Suzanna BowlingAugust 5, 2022
Read More
Scroll for more
Tap
Meet Me in St. Louis For a Zing Zing Zing Heartstrings Great Time
What To Watch December 15th To Take Away The Blues