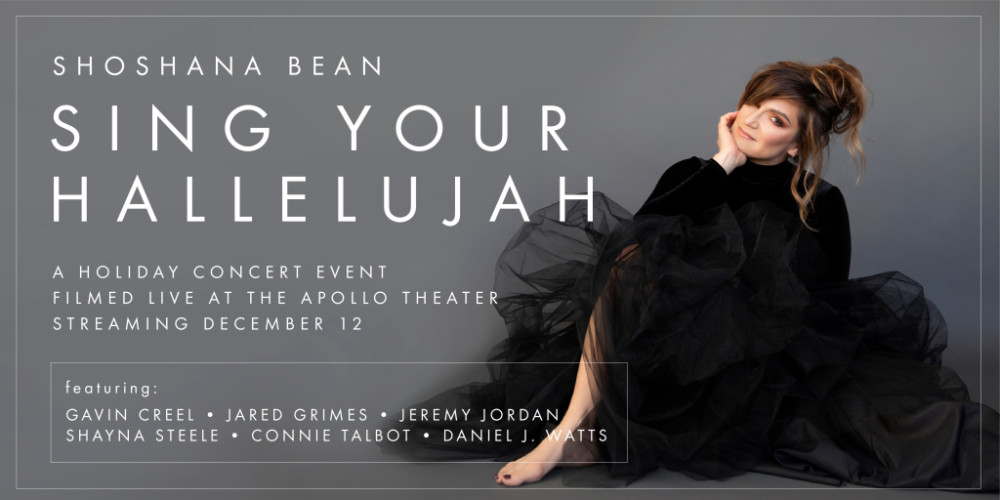 Broadway star Shoshana Bean (Broadway’s Waitress, Wicked) began a holiday tradition a few years ago at the Apollo Theater in New York City with her holiday concert, Sing Your Hallelujah. Luckily for us all, that filmed event will now stream worldwide on Saturday, December 12th giving us all something to be truly thankful for this holiday season. It will premiere around the globe in an exciting rolling streamed events starting at 8:00pm AEST in Australia, 8:00 pm GMT in the UK, and 9:00pm EST in the US and Canada, all through Stellar, a new premium streaming platform designed specifically for these kind of live performances.

With so much going on this crazy wild ride of a year, the holiday season has always been a time to celebrate and enjoy, but also give a moment to reflect, connect, and be thankful for all that we have been given. Shoshana Bean’s magical holiday celebration, Sing Your Hallelujah hopes to capture the true spirit of the season, with fresh interpretations of holiday classics, intimate collaborations with special guests, and touching reflections of an unprecedented year in history.

“When I stand on the Apollo stage, something magical and powerful always takes over. While circumstances prevented us from gathering and celebrating in the way we are accustomed, I couldn’t let this holiday pass without giving the best gift I know how to give. The gift of you, healing, and connection through music,” Shoshana Bean shared.

It’s an exciting staged moment, that ticket holders will be able to stream on any computer browser, mobile web,the Stellar Android or IOS app, or on TV via the Stellar app on Apple TV, Fire TV, and Roku. Tickets start at $30US with various VIP Package options that include a Live Q&A after-party, signed poster, audio recording of the show, personalized holiday greeting, and more. To Purchase or for more information, please visit www.singyourhallelujah.com.

Suzanna BowlingMay 19, 2022
Read More
Scroll for more
Tap
What To Watch December 7th To Take Away The Blues
Kris Kringle The Musical Streams in a Joyous Daily Song or Two Leading Up to the Big Day