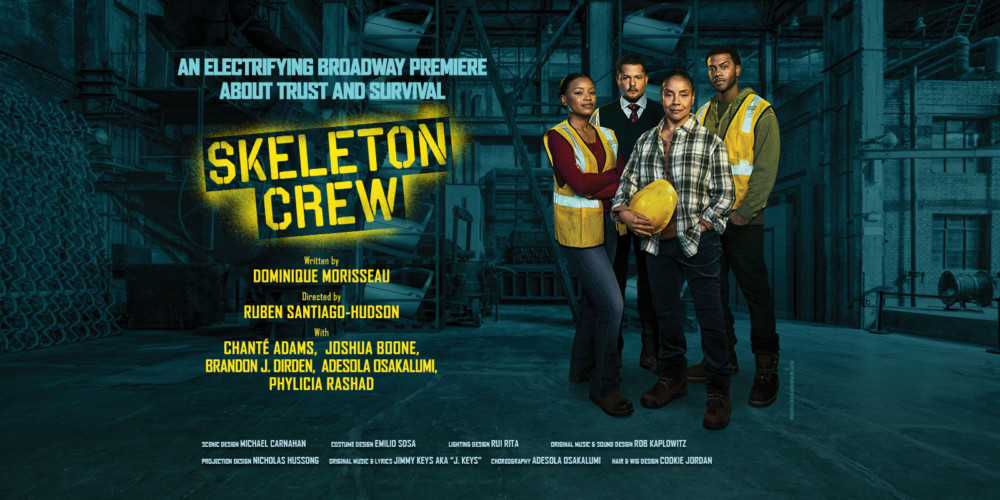 1/25: Space Dogs (MCC): This new musical Van Hughes and Nick Blaemire tells the true story of a stray dog and the top secret Russian scientist who sent her to space during the Cold War.

1/26: Dominique Morisseau’s Skeleton Crew finally opens January 26th. Tony Award® winner and five-time Emmy Award nominee Phylicia Rashad will return to Broadway in Manhattan Theatre Club’s Broadway premiere of Skeleton Crew, directed by Tony Award® winner Ruben Santiago-Hudson. In 2008 Detroit, a small automotive factory is on the brink of foreclosure, and a tight knit family of workers hangs in the balance. With uncertainty everywhere, the line between blue collar and white collar becomes blurred, and this working family must reckon with their personal loyalties, their instincts for survival and their ultimate hopes for humanity.

1/27: The Garden of the Finzi-Continis (at Museum of Jewish Heritage) Based on Giorgio Bassani’s 1962 novel, the musical begins on the eve of World War II and tells the story of an aristocratic Italian-Jewish family, the Finzi-Continis, who believe they are immune to the changes happening around them. This co-production by New York City Opera and National Yiddish Theater Folksbiene has music by Ricky Ian Gordon (Intimate Apparel, Ellen West) and a  libretto by Michael Korie (Flying Over Sunset, Grey Gardens.)

1/31: Set in turn of the century New York, Intimate Apparel tells the story of Esther, a lonely, single African-American woman who makes her living sewing beautiful corsets and ladies’ undergarments.  Seeking love and romance, Esther embarks on a letter writing relationship with a mysterious suitor laboring on the Panama Canal, and comes to realize that only her self-reliance and certainty of her own worth will see her through life’s challenges. The role of Esther will be performed by Kearstin Piper Brown at Tuesday through Saturday evening performances and Sunday matinees, and will be performed by Chabrelle Williams at Wednesday and Saturday matinee performances.

2/7: Tambo and Bones (Playwrights Horizons) Two characters trapped in a minstrel show, in this play by Dave Harris

The production, directed by Jerry Zaks, with four Tonys of his own, directs, while Tony winner Warren Carlyle provides the choreography.

A universally cherished treasure of American musical theater, The Music Man was a smash hit when it premiered on Broadway in December of 1957. It took home five Tony Awards, including Best Musical, and ran for 1,375 performances. It has been deemed one of the “great glories” of American popular culture by The Smithsonian Institution.

2/15: Black No More a new musical inspired by George S. Schuyler’s Afrofuturist novel set during the Harlem Renaissance, is the story of Max Disher (Brandon Victor Dixon), a young man eager to try the mysterious machine invented by Dr. Junius Crookman (Tariq Trotter) that guarantees to “solve the American race problem” —by turning Black people white. Through a fusion of music and dance, Black No More is one Black man’s journey colliding with truths of race and identity.

2/23: Confederates Sara, an enslaved rebel turned Union spy, and Sandra, a tenured professor in a modern-day private university, are having parallel experiences of institutional racism, though they live over a century apart. This New York premiere by MacArthur Genius Fellow Dominique Morisseau, directed by Stori Ayers, leaps through time to trace the identities of these two Black American women and explore the reins that racial and gender bias still hold on American educational systems today. At the Signature Theater.

2/23: Inspired by the true story of the first Chinese woman to step foot in America, Lloyd Suh’s critically-acclaimed play, The Chinese Lady, is a tale of dark poetic whimsy and a unique portrait of the United States as seen through the eyes of a young Chinese girl. In 1834, 16-year-old Afong Moy sailed into New York Harbor and was immediately put on display for a paying public who were mesmerized by her exotic ways and horrified by her tiny bound feet. As audiences follow Moy’s travels through America as a living exhibit for decades, she shares her impressions of a young country struggling with how to define itself.

Suzanna BowlingJanuary 26, 2023
Read More
Scroll for more
Tap
Forget Voting About Talent Now It Is All About Inclusion
Harry Potter and the Cursed Child Terminates Contract With James Snyder