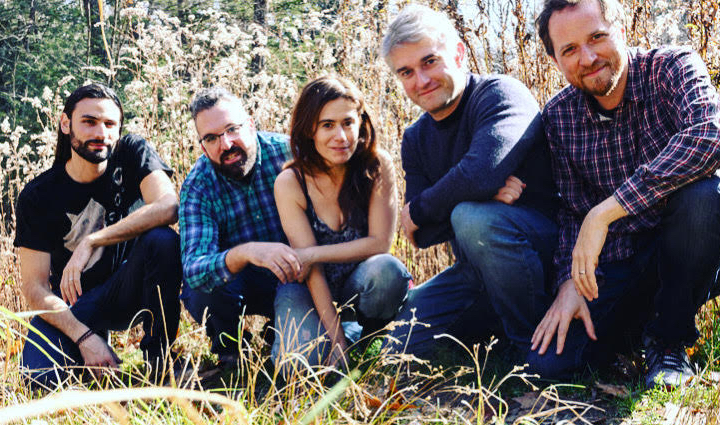 Last year, as the Christmas season was kicking in, Rebecca Hart with band in tow, and a variety of special guests, did an intimate but remarkable version of a holiday show — or at least her idea of one. Laden with a few blasphemous references and a bow or two to Hanukkah (or Chanukah depending on where you look), this millennial proved to be knowledgable beyond her generation drawing on a solid set of references from country to Irish ballads, to perform quite a bunch of originals and cover all in her own special style. Once again, she does her version of this show at Rockwood Music Hall’s stage 3 on December 13th, at 8:30 pm.

This NYC-based actor, songwriter, theatrical writer/composer once accidentally won a comedy contest in a bar in Dublin, Ireland, while appearing as musical guest. She’s racked up acting credits in the national tour of Lynn Nottage’s Sweat with the Public Theatre Mobile Unit; The Civilians’ Rimbaud in BAM, perfomed in Midsummer, a play with songs at Hartford Theaterworks (CT Critics Circle Best Actress Nomination); done a workshop of The Pogues musical ‘Fairytale of NY’ at the Public, and five shows at the Actors Theatre of Louisville including lead roles at the 35th/36th Humana Festivals. She can also be seen playing guitar in Young Adult, a film starring Charlize Theron.

As a composer and/or lyricist, her work has appeared in productions with The Civilians, Target Margin Theatre, the Sprkbox Festival in Oslo Norway, and Branden Jacobs-Jenkins’ GLORIA at Woolly Mammoth. Internationally, she has performed at the National Theatre of Oslo (Sprkbox), the Yarmouk Cultural Centre in Kuwait, and the Town Hall Studio in Galway, Ireland (original solo musical produced by the Druid). She has toured extensively in Ireland (though it’s been a while) at venues like Whelans, the Project Arts Centre, the Roisin Dubh, and Cyprus Avenue. Her original solo show ‘Jazz Desert: The Life & Death of an American Band’ was presented by the Druid at the Town Hall Studio in Galway. “The Magician’s Daughter,” her recent album, was produced by acclaimed cellist/songwriter Ben Sollee in Louisville KY and by Ben Arons (also her band’s drummer) in NYC.

Q: How is this year’s set different from last year’s?

RH: There will be some similarities for sure; I like tradition. NYC burlesque legend Jonny Porkpie and I will do our annual holiday comedy song. We’ll be doing material from The Magician’s Daughter for sure. But this band has been playing together a lot since then and I’ve written a bunch of new material. Also, there’s some cross-pollination happening such as a song written by Matt Gelfer, and one from a rock musical that David Kornfeld and I wrote for The Civilians Theatre Company R&D Group.

Q: This looks a little like a different band …

RH: Same band but we finally named ourselves — Rebecca Hart & The Wrong Band — after the Tori Amos song. They are great. Right now it’s a five piece: myself on guitar/lead vocals/primary songwriting, Kornfeld (keyboards, laptop, melodica and vocals), Gelfer (fiddle, mandolin, guitar and vocals), Chris Nattrass (upright bass), and Ben Arons (drums). We are joined occasionally by Nick Stephens on trumpet and our ‘unofficial’ bandmate Mr. Jonny Porkpie, the Band Disruptor or sometimes Court Jester. It’s a fun mix of people varying widely in age and influences (David and I share a background in theater and in ‘70s rock; Matt and I share a love of twangy Americana; Ben and I had a great time emphasizing the electronica elements of the album and looking for ways to bring it out more from different parts of my life…

Nick, David, and I met in grad school at NYU studying writing for musical theatre; Ben and Chris and I play in The Dirty Waltz Band, a folk cover group, and I know Matt from his wonderful ‘folkgrass’ band The New Students, with whom I used to gig a lot.

We talk a lot about how this group came together seemingly effortlessly and we can’t quite remember how but it works. All I know is I made ‘The Magician’s Daughter’ and needed some people to perform it with me and suddenly there they were. It was very much ‘if you build it they will come’.

Q: Will this be a special Christmas show or representative of your general set?

RH: We’re calling this the “annual holiday show” because the theater artist in me loves a theme (light in the dark time of the year)… And, we’ll be doing a nod or two to the season. Also, most of the band is at least half-Jewish so it would never be solely a ‘Christmas’ show. Otherwise, it’s a regular gig…

Q: Of the songs that you’ve composed, which ones best represent who you are and your music’s direction?

RH: I’m enjoying the range of influences from the various artistic things I do, the people onstage and the freedom I feel within that to explore. We are definitely a folk band — with an upright bass, fiddle, etc. — but I don’t always write folk songs. Our sound includes crunchy synthesizers and vocal effects and (upcoming) electric guitar. I like writing one thing by myself and having it come out like something else once the guys are playing it. There’s room for everything, which is why it makes sense to play a whimsical folk duet (“Waltz Home”) and then a haunting epic-ish rock song (“Perfume”)… and then have a burlesque comedian run onstage for a parody song at the end of which he takes off his pants. It’s all part of what I do.

In particular, “The Kestrel Strand” is a song that people seem to really respond to; we always joke about how it’s our most-video’d song… People seem to take out their phones as soon as it starts. It’s a folk tune about being in a bar in Ireland and observing a couple in love. When I wrote it, I remember making a conscious decision to keep it simple musically and emotionally. It’s a waltz with a fiddle solo; I’m usually a lot more smoke and mirrors and imagery. Particularly, I forced myself to just be truthful and vulnerable and not allow myself irony, wordplay or abstraction. On the album there are two versions; one with the Dirty Waltz Band backing it up and one that’s recorded live on producer Ben Sollee’s porch, with just my guitar and him playing tenor banjo. You can hear the crickets.

On the other hand, a song like “Perfume” — about ‘crossing over’ after death and the unfinished business we leave behind — is not straightforward or literal at all. It’s more like a hallucination and the music — electronic samples, digital percussion and slightly otherworldly layered vocals — reflects this.

Now, with the current band, I’m excited about the way different voices are actively shaping the songs. In rehearsal, there’s lots of ideas flowing and the set includes one or two things not composed by me.

There’s also starting to be variations in instrumentation which is fun. We’re working on a new tune now where I play piano (!) and Matt plays electric guitar (though that may not be ready by 12/13). One of the new tunes is definitely just foot-stomping country rock which I’m not mad at. Come hear it!

Q: As to your activities over the last year…

RH: Band-wise: We’ve played some really great shows including regular nights at the Rockwood Music Hall (including our “P’Easter” gig in the spring); have done first time appearances at The Cutting Room and the Shapeshifter Lab in Brooklyn, the SoFar Sounds Series NY and DC; and various house concerts in Brooklyn and upstate. I played solo sets at SoFar, Hartford Theaterworks in CT, and the NY Songwriters Circle at the Bitter End. We also very memorably played the world famous Kripalu Yoga Center in The Berkshires this November and have been invited back for the Spring.

Q: And as to other non-Band news…

RH: It’s been a big year. My graduate thesis musical “Iron John: an American Ghost Story” (lyrics/book by me, music/ book by my collaborator Jacinth Greywoode), was being produced at NYU’s New Studio on Broadway (Tisch Drama) literally during last year’s holiday show (I had to miss that performance ). Since then, we’ve been honored to have the show presented at the Tony-Award winning Theatreworks’ Silicon Valley New Works Festival. Developed at the O’Neill Center, it showcased at the National Alliance for Musical Theatre Festival at NYC’s New World Stages where it was one of eight shows chosen blind from 219 submissions to be presented to industry from across the country. We are now represented by Abrams Artists Agency and are talking to a few regional theaters about production.

As mentioned, bandmate David Kornfeld and I were accepted into The Civilians Theatre Company’s R&D Group where we spent a year developing a rock/theatre piece about the human brain, culminating in a presentation at The Lark Playwrights’ Center featuring David and I in the cast and bandmate Ben Arons on drums. (Book/lyrics by me, music by David)

I was co-nominated for a Helen Hayes Award for Best Sound Design for a song I was commissioned to write & record for the Woolly Mammoth Theatre production of “Gloria.” Nick Stephens produced and played on the recording.

I played the role of Olympe des Gouges in “The Revolutionists” at Playhouse on Park in West Hartford CT; the cast then won the CT Critics Circle Award for ‘Outstanding Ensemble’ and we are up for a number of Broadwayworld awards as well. I think that’s it.

Q: Okay, so who are your favorite artists and why — and who have you met?

RH: I haven’t met any of my music heroes actually! I met James Taylor once and that was exciting but we didn’t talk about music and he isn’t on The Big List.

As to The Big List, it’s the usual list of those who were really formative and influential: Suzanne Vega, Joni Mitchell, Rickie Lee Jones, Sting/The Police, Steely Dan, Paul Simon, and Jethro Tull with the usual caveat that I don’t necessarily’sound like my influences (except Suzanne Vega probably). There are plenty of other modern/recent bands I love, but these are the Formative Ones.

Looking at them all together I guess the “why” always had to do with the intelligent adventurousness of the songwriting… both in the lyrics which were full of imagery and the fantastical/theatrical and the sometimes funny and often weird while still being often super personal and true… I do not get bored listening to these songs.

I also deeply love Irish traditional music and I know that pops up in my work all over the place. ‘The Magician’s Daughter’, an album largely ‘about’ and in the wake of my father’s death is heavily influenced by Sufjan Stevens’ album ‘Carrie and Lowell’ which he wrote about his mother’s death and which I was listening to obsessively at the time.