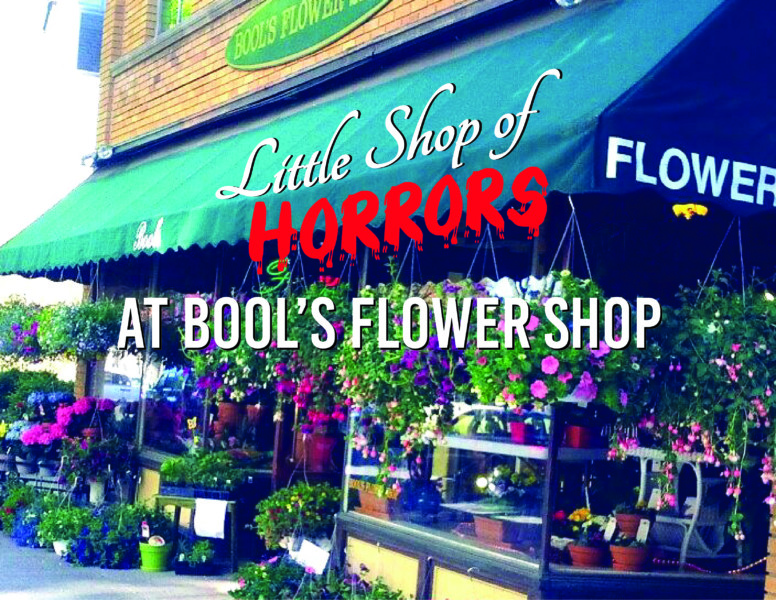 This will be the first time the classic rock horror comedy is staged site-specifically inside a local flower shop. The classic story of Little Shop of Horrors takes place inside Mushnik’s Flower Shop on the fictional Skid Row in New York City. In this production, the show will be completely immersed in the quaint and fragrant Bool’s Flower Shop in Ithaca, New York. Bool’s Flower Shop has been providing the Ithaca area with their services since 1894. They offer a variety of products and services, from a small vase of flowers to large weddings or events. It has been named “Ithaca’s Best Flower Shop” by several local journalists. This year marks the shop’s 125th anniversary.

In the summer of 2018, Lead Producer Jacob Stuckelman reached out to the owner of the shop, Doreen Culver-Foss, with the concept. Obviously knowing the story of the show but not having any previous experience with theater, she was visibly baffled by the idea. “I was in shock when Jacob came to me with the idea and had no idea how the production would work logistically,” she told us. After weeks of discussing options and coming to an agreement, the flower shop is gearing up for the production and willing to help in any way they can – while still running the store each day. Bool’s will remain open during the run of the show during normal business hours, and the production team will load the show in and out for each performance.

Stuckelman, a senior at Ithaca College, is extremely excited to put this show on and present site-specific theatre to the Ithaca community. “Site-specific theatre is a way to enhance traditional storytelling and adds layers of specificity and realism that can’t be achieved through other mediums. What excites me about this production is that Seymour and Audrey’s world is inside the flower shop while our reality is right outside the front doors.” He has put together a team of his peers to help make this production possible, including co-producer, senior Ben Fleischer; director, senior Alisar Awwad; and music director, graduate student Daniel Mullarney.

Little Shop of Horrors will run from April 24-27 at 7:30 p.m. and April 28 at 12 and 5 p.m. Tickets will be $18 and can be purchased online on our website. There will be a student rush for every performance where tickets will be sold for $13 on an in-person, first come, first serve basis. There will also be an in-person lottery before each performance, and more details can be found on the Tickets tab of their website. Casting will be announced at a later date.

For those who are interested in the production but are not able to attend, please reach out via the ‘Contact’ page. This project is entirely self-funded and could use the support of anyone willing to give through the ‘Donate’ page on the show’s website: www.littleshopofbools.com .

McCurdy’s Whiterock Cliff Sends You Stumbling Off the Edge into Something Completely Different.