Six Not a Traditional Musical 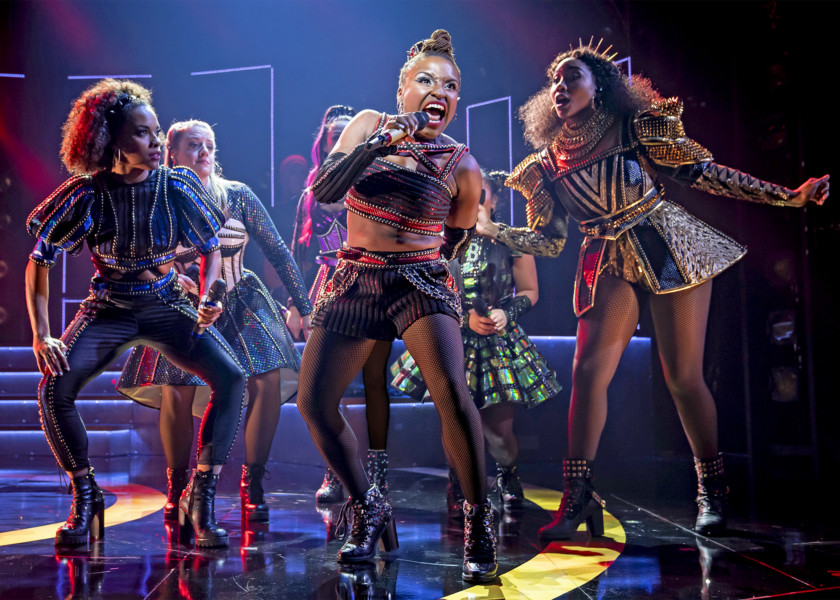 Six Not a Traditional Musical

The announcement just before the curtain went up said :”welcome back to Broadway”; this was greeted by a thunderous ovation. Hey, it takes a lot to keep a New Yorker down for very long, but Broadway is back and Six is just what we needed. This show is funny, well choreographed and has phenomenal singing.

Six, at the Brooks Atkinson Theatre on West 47th Street was rocking from the very first song and throughout the quick ninety minute musical.  Adding to the enjoyment of the aforementioned, is the on stage band comprised of all women. The fantastic lighting is by Tim Deiling. The set designer Emma Bailey has designed a classically wonderful set. Between Bailey and Deiling, the mix between the stain glass of a Church and a classic music hall that alternate depending on the show’s scene. This glam atmosphere gives it a pop concert feel.

Writer’sToby Marlow and Lucy Moss (she also co-directs this show) give Six an explosive and interesting look into the history of King Henry VIII. Henry the VIII is the King who would eventually start the Anglo- Catholic Church. This would later be transformed into the Protestant Religion, with many facets of the Protestant Faith. The former wives tell a comedic version of this piece of history which was both novel and classic.

Six, is not considered a serious musical by any means. At times it felt like I was watching American Idol, but it is perfect for these times, with their upbeat, lite and at times poignant story. These girls bring it from start to finish. Songs like “Ex Wives,” “No Way,” “Don’t Lose Ur Head,” and “Heart of Stone,” the very first four songs really hit the audience right between the eyes with its fast pace and churning lyrics.

Later on in the show: “I Don’t Need Your Love” and “Six” are most notable. Also notable are the voices of Adrianna Hicks, Abby Mueller and Anna Uzele. The performance I was at did not have Samantha Pauly, but instead was substituted by Courtney Mack. All six woman had a story to tell throughout the show about how the Queens were treated by the King back in 1500’s England. We learn about how they came to be Queens, as some were selected by the King just by pictures, some by happen stance, yet none, other than Jane Seymour really cared for him all that much…. he was a philanderer. He had a short temper and only Seymour produced a boy- heir to the throne, which added to the friction of the many marriages In this modern musical.

We are treated to what a farce was made if their lives, by the musicals songs and choreography. It is the choreography, lighting and song that makes this show a stand out and will be talked about in theatrical circles.

For the traditional musical lover Six maybe not for you; but for a fun evening out that pokes fun at history, with great alacrity and parody Six ends up being a ten!.