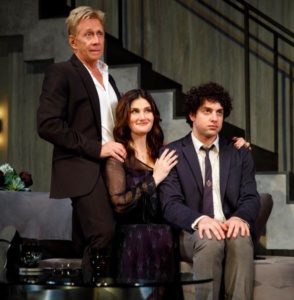 “Beauty isn’t everything. So why is it the only thing?”

Joshua Harmon’s Skintightdeals with how we age. For women, age is a pretext for divorce and being left. For older men, not so much, or is it? Based loosely on the Calvin Klein’s story of 2010, when Klein stepped out with a 20-year-old “male model”, the play hits on the obsession for beauty and the cost. Jodi (Idina Menzel) unexpectedly drops in on her father Elliot (Jack Wetherall, a dead ringer for Calvin Klein) on his 70th birthday. Her husband left her for a much younger woman who “was a baby when she was at college”, and he invited all her friends and their children to his engagement party the night before. Needless to say, she is wound-up tight. When her father’s latest toy, Trey (Will Brittain), who is 20, claims he lives there, Jodi is thrown through a loop. She has come home for family bonding and Trey was not what she was expecting. Jodi has never really dealt with her father’s latent homosexuality and the fact that he is shacked up with a porn star as young as her son Benji (Eli Gelb). This self-absorbed princess starts to freak. 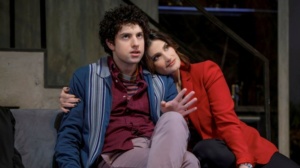 Jodi uses her dead mother’s memories against Trey, but her father is obsessed with Trey’s young skin, which he dreams of making it into thousands of sheets. Trey walks around nearly naked, except for his Calvin jockstrap, seems callow, but maybe, just maybe he really loves Elliot and that scares the insecure Jodi. Even as the two are in romantic throws, both are getting Botox as is the maid Orsolya (Cynthia Mace) and the manservant Jeff (Stephen Carrasco). Both his servants have had a past with Elliot. Jodi is offered this treatment more than once because in Elliot’s world this is a must. Jealousy also runs rampant when Benji and Trey connect. When it seems they may go further, Grandpa, who has witnessed the connection, puts a stop to it and seems to blame Benji.

Nobody in this play is perfect. Trey is selfish, rather unpleasant, belligerent, unsophisticated, has anger issues, and sleeps with men and woman. Elliot is arrogant, removed and a little uncaring. Jodi thinks the world should revolve around her, is frustrated, and self-absorbed. Benji is geeky, awkward, studies Queer Theory abroad, and thinks the world owes him a living. All are narcissistic, and all deserve each other.

Underneath all of this is a study on gay intimacy. Is an older-younger relationship healthy or is it just a rich, older man giving into a grasping gold digger? Elliot sees beauty as life-giving and wants to wake up to it every morning, no matter the price.

The cast all performs well with Menzel breathing life and energy into the piece like a Tasmanian devil. The scene featuring Mr. Gelb and Mr. Brittain though seems the most real.

Lauren Helpern’s set has a lushness to its sterile veneer.

Our world is obsessed with beauty and it is true the more beautiful and young you are the more the world opens its arms to you. Maybe that is the point. Maybe we need to look past this flaw in society and see the inner beauty. Oh well, that’s another play.