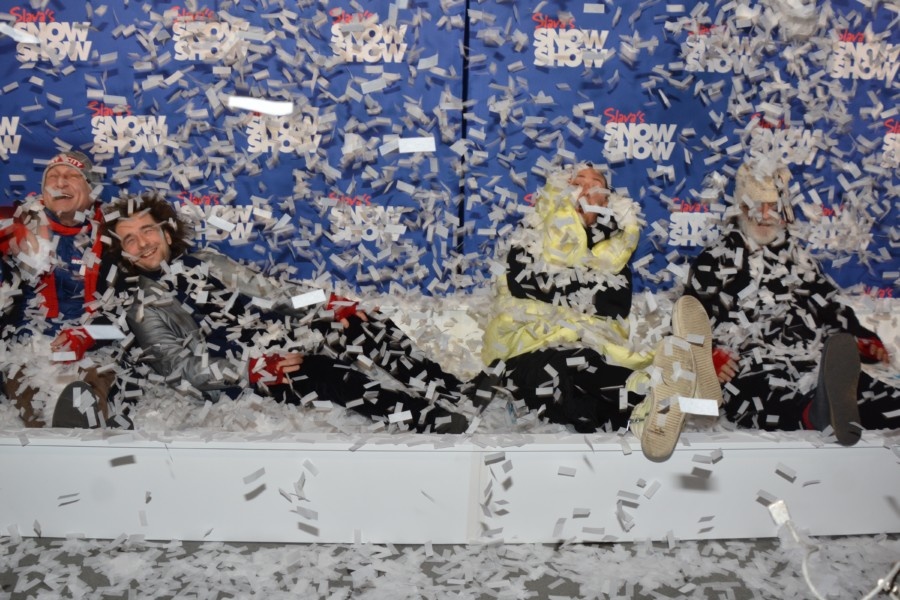 Slava’s Snowshow has performed all over the world, since 1993 including Broadway and has returned to the Stephen Sondheim Theatre. Full of clowns, mime and Gallager type antics, that drench the audience with water, just for the fun of it, this is an acquired show.

These nibble acrobats precariously stroll across the audience like type rope walkers who might land in your lap at any minute, as glitter sparkles and is distributed and neon balls roll into the fray, scraps of paper are sure to stick to your clothing. This is a show where seating as far back from the stage is not a bad thing. You will still however be covered by snow paper and a huge cobweb, that seems to stretch for miles.

Slava’s Snowshow is part slapstick, part clown and part mime, with clever and creative visuals. You can hear the laughter of children throughout the show and that is captivating. My favorite moments were when the show’s creator, Slava Polunin dances with a coat rack or Vanya Polunin (his son) sits on a chair kept at an angle. As he reaches for what he wants, he keeps falling off. The show is full of acrobatic mastery.

The show’s creator, Slava Polunin and his son Vanya Polunin are the main performers, but as for the rest of who is performing for you, check the lobby call sheet, as this is a troupe of performers. Even the set has even been created by Slavia and Viktor Plotnikov.

How much of this show, would be as whimsical as it is without the brilliant costume designs. However no-one is given credit, so I would assume that is also Slavia and Plotnikov. The outfits have duck like shoes, huge floppy hats that resemble dog ears and oversized Mac coats for one set of characters and baggy yellow suits for the others. Th costumes allow them to shrink, grow larger, leap, fall and walk rather hysterically across the stage or off. This physical comedy is well done and is to be commended.

The music, again no credit is assaulting and is too loud. I would have loved a pair of ear plugs.

Like The Three Stooges, The Marx Brothers, of any cartoon where physical assault is funny, this show adds that type of humor to it’s antics.

In the end a huge snowstorm keeps getting bigger and bigger and the audience is in the midst of a rather fabulous blizzard. That is when the neon balls appear, which the audience keeps in the air.

If you like interactive shows, merged with clowns this show is for you.