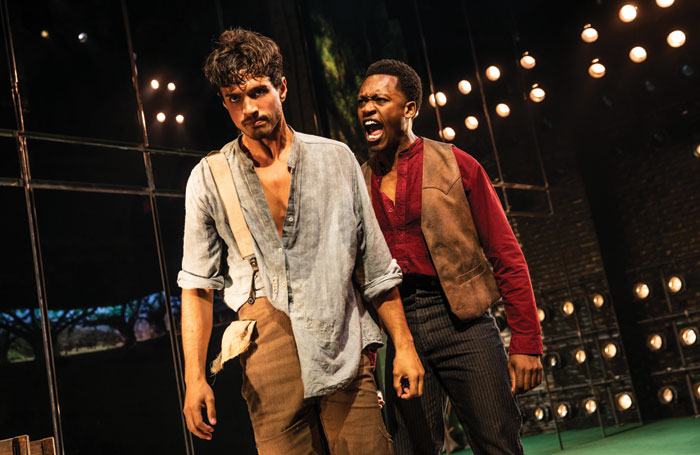 While watching Slave Play, I couldn’t help but wonder how does a two-hour intermission-less play, depicting the sado-masochistic fantasies of three couples serve as a sufficient metaphor for the race problems in America today? It seems to me this play has put that back 200 years, instead of moving forward.

As an art form, theatre is far more interactive than voyeuristic, Slave Play is so voyeuristic, that it seemed like 804 people were collectively watching an S&M peep show. The mirror upstage serves as a dominant insistence that the audience sees itself as part of the problem.

Jeremy O. Harris seems to be using this play, as a metaphor for racial relations in American. He offers himself as part of the solution, but is that solution painful and humiliating sex?

Slave Play is done in 3 parts. The first part has Kaneisha (Joaquina Kalukango), a slave, and Jim (Paul Alexander Nolan), a plantation overseer, who doesn’t want to be called “Massa”. Kaneisha seductively entices him as he threatens to whip her. She thrills stating “Mista Jim, call me a nasty negress, a nasty, lazy negress.”

Something is not right here. Though they are all in costumes the Riahana Song, the Calvin Klein underwear, Jim calling “Starbucks”, lead us to part 2.

We learn that all three couples are participating in Antebellum Sexual Performance Therapy to combat Racialized Inhibiting Disorder. They were all living out their black partners fantasy’s. The clinic is run by Patricia (Irene Sofia Lucio) and Teá (Chalia La Tour), partners in life, who have developed research to help black partners achieve sexual climax with their white counterparts. There are some hysterical lines. Dustin, insists his desire to move out of Harlem “has nothing to do with not wanting to live near black people and has everything to do with wanting to be able to get to an audition on time without having to walk almost a mile to get to a decent train”. At the end of this therapy, the couples break up.

The finale has Kaneisha, who has called Jim a virus, leaving him. He returns to their hotel room to keep their marriage together. She claims he doesn’t see her or listen to her. He undresses and rapes her. She calls the safe word and he stops, violently throwing up. She thanks him for seeing her and the play ends.

Robert O’Hara, directs this marvelous cast with aplomb. Clint Ramos’s set has placed a mural, of a plantation, so it is reflected on the mirrored wall of the set. Dede Ayite’s costumes are a mix of yesterday and today, as Lindsay Jones’ sound design adds to the concept.

I was not shocked, just confused at what Mr. O. Harris was trying to say.