Slave Play has Broadway Processing Up a Grand Entanglement 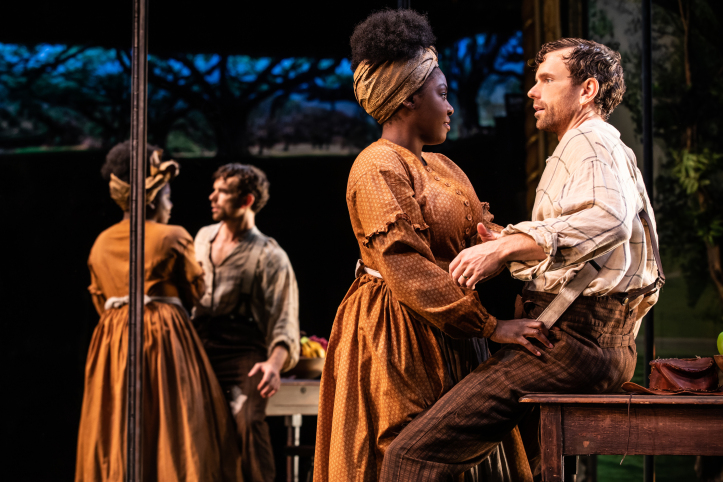 Slave Play has Broadway Processing Up a Grand Entanglement

When Jeremy O. Harris’s first foray onto Broadway came to an end, my theatre companion turned to be and said, emphatically, “Why in the world did we see this on a Wednesday night?!?” We needed to process, he emphatically stated, over a few drinks for a few hours, unpacking all the layers that he just witnessed, and that, I will say, is the highest compliment that can be given. Especially from this friend. And a true one, because what Slave Play does is present a whole lot of complicated and difficult questions that need to be discussed, processed (whether you like that word or not), and contemplated, not for a few minutes as you walk to the subway on a work/school night, but over time with a few stiff drinks long into the night. Even after a second viewing (I saw it when it first was presented downtown at NYTW).

It’s a complicated and direct satirical crack of the whip, throwing an ever impressive reflective mirrored light on slavery, power dynamics, sexuality, and class. Harris (Daddy) is trying, quite successfully, to find the shades between stances of racism, the power of internal music, and the ability to let it flow wild, fast and free. It’s all “work, work, work, work, work” when the compelling Jaoaquina Kalukango (Broadway’s The Color Purple) as the beautifully frustrated and expressive Kaneisha (a part first played by Teyonah Parris off-Broadway at the NYTW) finds her Dance Nation grove taking over her sweepingly, allowing with abandonment that certain something to take over her body. “Whatcha mean, Mister Jim?“, Kaneisha asks her whip-carrying master/mister/man-hunk, played with a complex and fascinating duality by Paul Alexander Nolan (Broadway’s Bright Star, Escape to Margaritaville).

At that pivotal moment, quick into the two-hour three-segment one-act play, we are roped, most completely, into Harris’s stunningly combustible and disturbingly erotic Slave Play that has transferred to Broadway after a super successful run at the New York Theatre Workshop. It’s provocative and uncomfortable, pushing boundaries and buttons that are hidden within every single soul in the theatre, daring us with staggering urgency to take notice and check our own prejudicial thoughts and politics. It keeps us off-balance, never really knowing the intention or the theory. We wonder what exactly we are seeing from moment to moment, deperately trying to piece it all together, only to be continually surprised at the turns it makes. Are we to take this explanation of personal psychology seriously, forever being pushed and prodded into seeing something from a different angle? Or are we meant to laugh at the raw and ridiculous psycho-babble being spewed forth by Teá and Patricia, played with a detailed and sincere nod to processing by Chalia La Tour (‘The Good Fight‘) and Irene Sofia Lucio (Rattlestick’s Orange Julius), while cringing somewhat with each snap of the whip stinging our sensitive liberal minds? Is there one answer to any of these questions?

It’s sexy, powerful, important, and silly, with the old Southern MacGregor Plantation displayed overhead and reflected back with even more grand clarity by the inventive scenic design of Clint Ramos (2ST/Broadway’s Torch Song), with the feverish red dream-like lighting by the impressive Jiyoun Chang (NYTW’s Sojourners, Her Portmanteau), and the sensual and serious costumes of the present and past by Dede Aylte (Broadway’s American Son), all tweaked and twerked up a notch from the downtown presentation. In the breeze of the cotton fields and the therapeutic movement, smartly designed by Byron Easley (Encores’ The Bubbly Black Girl) together with the intimacy and fight direction by Claire Warden (Nora Theatre’s Les Liaisons Dangereuses), we hear the rhythm in the ‘crack of the whip’ sound design and original music by Lindsay Jones (Public’s The Brother/Sister Plays) and experience and explore the fear and desire that is entwined in the shadow of the Master’s House. It’s a fantastical play-therapy session where there is no wrong or right response to the presenting problem in Slave Play. There seems to be some pretty major interpersonal dilemmas that needs to be undressed, and each are magnificently embodied by the very game cast that found a way to get even deeper and stronger than they were downtown at NYTW. Day four digs in, battling out their messed up conflicts in such a heartfelt way that even a few bent-over deep breathing exercises can’t quite get them back into pre-Starbucks ship-shape clarity and unity of purpose.

As directed with a heightened sexual arc of precision by Robert O’Hara (Mankind, Bella…), Harris attempts to rip apart history by shedding a forceful light on race, gender and sexuality in 21st century America by introducing us to a number of hotly contested and complicated couples struggling for connection across a divide.  “I’m in charge, funny white man” says Gary played with a few deep contradiction of love, anger, and discomfort by Ato Blankson-Wood (MCC’s Transfers) to his hot young counter part, Dustin, played to perfection by the wonderfully embodied James Cusati-Moyer (Broadway’s Six Degrees of Separation). Dustin and Gary’s individual melt-down moments on off-whiteness and aggression pushes us hard, smacking us upside ourselves with a conflicted idea of love and distress delivering one of the most connective moments for this audience member. “I’m not sure, Mistress” says the strong, handsome, and gifted Phillip, played provocatively by the deeply funny Sullivan Jones (Epic’s The Winning Side) to the heated Alana, portrayed strongly by the exacting and irreplaceable Annie McNamara (Public’s GATZ).  Shocking good, these four secondary actors deserve their own resolution and conclusion. “If I could speak for the group“, says one of the concerned as the manipulating process flies forward foregoing all scientific structure, and although at times the verbiage gets oppressive and drags on, the sensual drama and thesis of inequality gets dissected and investigated with passion and purpose.  Harris wants to ask a lot of complex questions at this Slave Play colloquium, some more pointed than others, poking at our funny bones and our deep sexual fantasies. Downtown with a subscription audience, the level of discomfort was palpable, making the shocked wiggle in their seats, but the Broadway crowd seems to have a better handle on what they walked into. All could feel the exacting observations cling and squeeze our collective skin and our seminar materials. So sign up for the Broadway version of this sexy and dynamic experiment and become engaged in a conversation that will likely continue long into the night. You are “making such great progress” Broadway, I’m so pleased.