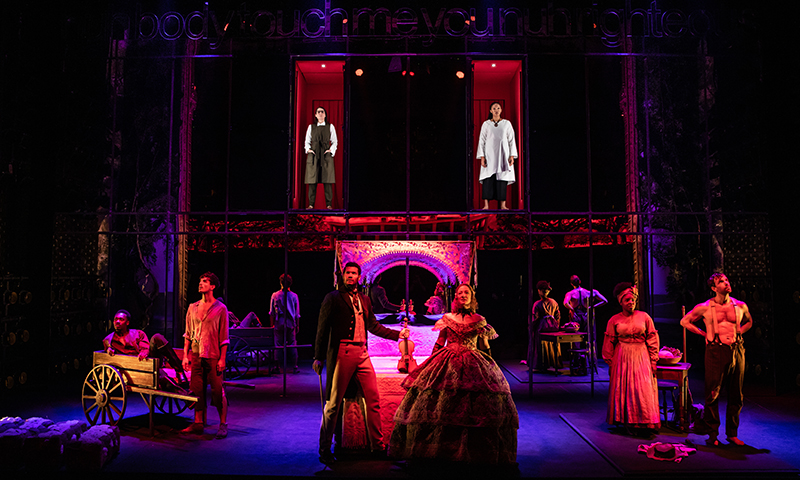 The Tony Awards had 2.62 million viewers, making it the lowest ratings ever for the ceremony live on TV. The biggest surprise of the night was when Slave Play, lost to The Inheritance as Best Play. O. Harris already announced his win in May and the news outlets and critics predicted he would win, even T2C, though we stated The Inheritance, by Matthew López was the much better play.

The Inheritance won the Drama Desk and Slave Play wasn’t even nominated in the list of 5 for the Outer Critics Circle.

Jeremy O. Harris’ Slave Play made history when it gained 12 Tony nominations almost a year ago. It set the record for most nominations earned by a play. It now has set a record, as the play that won the least awards on Tonys night.

Despite the shut out, the production, which closed in early in January of 2020, will return to Broadway this fall at the August Wilson Theatre. The announcement came right after the Tony Awards.

Slave Play‘s themes revolving around sexuality and slavery, drew reviewers and playgoers to either love or hate this show. There were petitions to shut down Slave Play for its treatment of black women characters, and voicing that it disrespects the violent history of rape in chattel slavery. In 2018, a petition titled “Shutdown Slave Play” was started, with the petitioner describing the play as traumatizing and exploitative of human atrocities.

Here is what t2c wrote.

Playwright Jeremy O. Harris announced to a cheering crowd at a party hosted by NeueHouse celebrating Slave Play that his acclaimed drama will return to Broadway later this fall and play the August Wilson Theatre.

Previews begin Tuesday, Nov. 23 ahead of an official opening night on Thursday, Dec. 2. The eight-week engagement will run through Sunday, Jan. 23, 2022.

The cast for the production’s return engagement will feature Tony nominee Ato Blankson-Wood, Tony nominee Chalia La Tour, Irene Sofia Lucio, Tony nominee Annie McNamara and Paul Alexander Nolan, all of whom starred in both of the play’s previous New York runs on Broadway and off-Broadway at New York Theatre Workshop. Joining the ensemble will be Antoinette Crowe-Legacy, who will play Kaneisha, a role Harris wrote for the actress when he was a student at Yale School of Drama and which she originated in Slave Play’s first developmental production in 2017 as part of Yale’s Langston Hughes Festival. Additional casting will be announced shortly.

Following the run at the August Wilson Theatre, the production will head to Los Angeles as part of Center Theatre Group’s upcoming Mark Taper Forum season.

Suzanna BowlingOctober 20, 2021
Read More
Scroll for more
Tap
A Thrilling Tony Awards Where The Best Play Is The Inheritance
EGOT Legend Jonathan Tunick to be Honored by the Sharon Playhouse in Connecticut in Concert