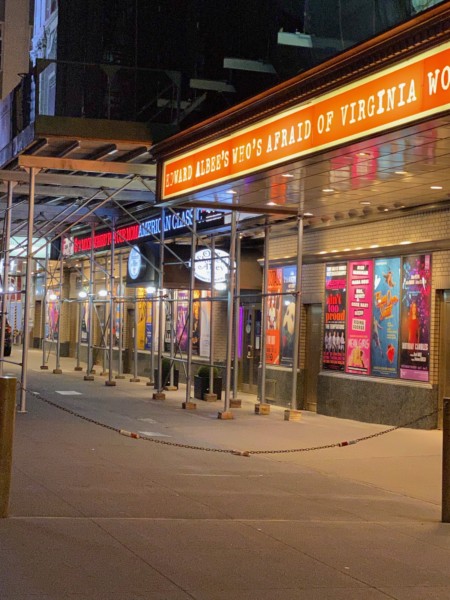 On Friday Martin McDonagh’s Hangmen, which was in previews, announced that it would not arrive on Broadway. Today the star studded revival of Edward Albee’s Who’s Afraid of Virginia Woolf? announced they too would not reopen.

Scott Rudin, Barry Diller and David Geffen confirmed due to the coronavirus, would not resume performances when Broadway reopens its doors.

The revival had played nine previews at the Booth Theatre and was scheduled for an official opening April 9th with a limited engagement through August. 2nd.

Many more shows are feared to be one of many forced to pull out due to the COIVD 19 Virus.

The 76th Annual Theatre World Awards has been postponed to the fall due to the COVID-19 pandemic. The event was originally scheduled for June 1 at the Circle in the Square Theatre.

“In the interest of safety, the 2020 Theatre World Awards has been postponed,” said Theatre World Awards President Dale Badway in a statement. “We hope to gather for our always spectacular evening sometime this fall. We are following governmental guidelines to practice social distancing, in hopes that our recipients, audiences, members and friends stay well and healthy. At this critical time, all of us at the Theatre World Awards would like to focus on the care and well-being of everyone in our Theatre World community and continue on with the awards tradition when appropriate.”

The Helen Hayes Awards has also been postponed to August 24.

It’s with great care and consideration for our community that we announce the postponement of the 2020 Helen Hayes Awards, originally scheduled for May 18 at The Anthem. Our industry and communities are facing great uncertainty and we know it best to act with caution and concern. At this time, we are planning to reschedule the community celebration for late August. Following our standard processes, tickets will be available two months before the event, and recipients will be announced when the ceremony takes place.

The Tony Awards has yet to have make any kind of announcement.

Suzanna BowlingApril 10, 2021
Read More
Scroll for more
Tap
Good News For Small Business and More
And The Show Must Go On With The 24 Hour Plays, Casting Directors and the Brilliant Seth Rudetsky, his Husband James and the Stars In The House