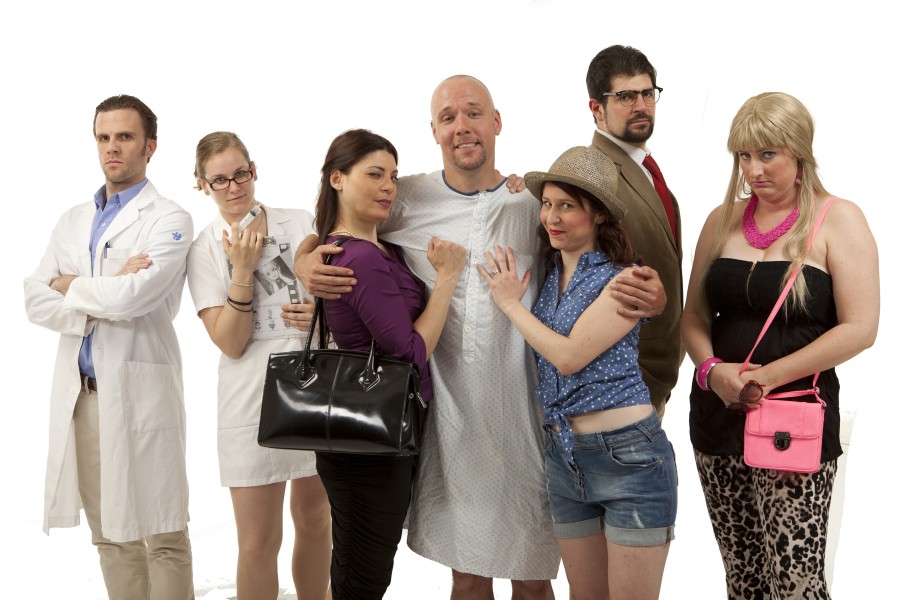 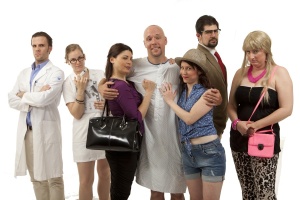 The KTTZ is a contemporary interpretation of the historical traveling theater. It is a German-speaking ensemble that maintains its own equipment, and except for some material sponsors for the stage design, it finances itself exclusively through entrance fees. As antique as this roaming form of theater may be, the KTTZ’s comedic plays are mostly world premieres with modern, contemporary themes.

This season’s comedy, “’The White Cage’ is performed in fourteen locations across Switzerland, and is often linked with a fine, three-course dinner served between the acts of the play”, explains Lukas Fehr, the author, producer, and actor in the play. This original farce in two acts is directed by Fredy Kunz and is reminiscent of the Carol Burnett show as it keeps the audience in stitches anticipating the next pratt fall or raucous entrance.

After an unfortunate accident on the road, truck driver Beat Haller must stay in the hospital for further observation. Adeptly played by lead actor Marc Hofmann, Beat is a “good ol’ boy” who air-guitars his gurney with a tattooed arm and refuses to remain in bed or be controlled by the medical staff.

Doctor Pfeiffer, (the quintessential, straight-laced German doctor), is played by Thorsten Becker, whose high-energy, strong delivery is grounded in realism and drives the beginning of the first act, leaving the viewer waiting for his next entrance. Mr. Becker has seen cinematic success as the lead character in “This One Day”, a drama that was awarded Best International Short Film at the NY International Film and Video Festival, Los Angeles Edition 2012. (www.thorstenbecker.info)

Doctor Pfeiffer’s Nurse, (Olivia Oeschger, who is solid in her delivery and anchors the play), has been handed three photos of women from Beat’s mangled truck and assumes they are his daughters. She calls to tell them about Beat’s accident. Unfortunately, Beat is actually dating all three of these women, each of whom believes she is the only one in his life. The plot thickens and hilarity builds as all three women begin to arrive in Beat’s hospital room.

Mareike Hennenkämper steals the stage in leopard pants and pink pumps while she gushes and whines as Pia, girlfriend number one. (www.theater-newsletter.ch). Tanya, (girlfriend number two played by Claudia Erne), enters next in Daisy-dukes and boots and wastes no time showing that she knows what to do with them. Girlfriend number three, Lawyer and vixen Cinzia Di Blasi, (a Sofia Vergara look-alike), saunters in as Michelle, pledging her loving concern and threatening to sue if her lover is not released immediately, (www.cinzia- dibellini.com). Aiding in Beat’s plight is his prude brother-in-law René, (adeptly played by brilliant physical comedian Lukas Fehr), who agrees to switch places with him so that Beat can attempt a grand escape.

The “Kleines Tournee Theater Zurich” performs everywhere- museums, restaurants, open-air amphitheaters, hotels and circus tents. Originally scheduled to complete its run in November, “De Wissi Chefig” has been so well received that performances have been extended through March, 2014.

So, if you happen to be in Switzerland, understand Swiss-German and are looking for a fun night out complete with an amazing dinner, brilliant theater, riotous laughter and great wine, do not hesitate to see Kleines Tournee Theater Zurich’s “De Wissi Chefig”!