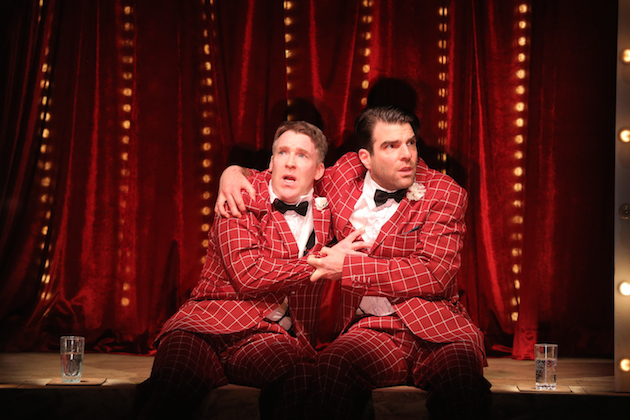 Smokefall Getting Into the Pulse of a Family

Smokefall Getting Into the Pulse of a Family 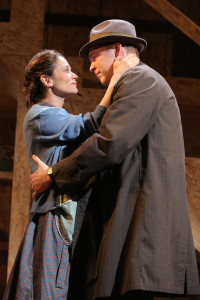 “You told me that every love story is a tragedy, because its ending is built into its beginning.

”Playwright-screenwriter Noah Haidle (“Stand Up Guys”) Smokefall, is a piece that dissects the way we get stuck in our family drama’s. Directed by Anne Kauffman at the Lucille Lortel, Zachary Quinto (Spock in the re-make of “Star Trek” and the revival of “The Glass Menagerie” on Broadway), leads us through the beginning as if he were the narrator in Our Town. No longer is life simple, peaceful or fulfilling. As he introduces each of his family members, they are numbered like footnotes, as if not to forget how life went totally askew. Even his name in the program is Footnote, which makes sense in the whole context of the play. Violet (Robin Tunney “The Mentalist”) is pregnant with twins. Two boys, who are mistakes according to their father. The twins hear their father whispers it to them in vitro screaming “help me!” Violet’s father, The Colonel (Tom Bloom), loved his wife on six continents and has dementia. 16-year-old Beauty (Taylor Richardson), hasn’t spoken a word in three years, drinks paint eats dirt and tree bark. Her behavior is a result at trying to keep peace in the family. Her father Daniel (Brian Hutchison), complain about noise and money and this was Beauty’s way of trying to keep the family together. It does not work. Daniel leaves. 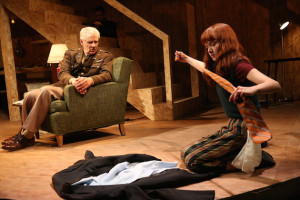 Scene two: the twins are getting ready to be born in Violet’s womb or in this case a vaudevillian stage. Dressed in matching red-checkered suits and bow-ties, they sing “Send in the Clowns.” They discuss their futures, act as siblings do punching and telling jokes and exchanging thoughts on being born. One decides that the fear is too great; after all it is a tough womb.

After intermission we are in the home of the child who has been born but he is now an old man (Bloom). It is his birthday and his estranged son (Quinto) has come to visit. Past and present blend together as they deal with the pain of what has shaped them calling and discussing original sin.

This is a hard play to take, if you don’t understand that what you are seeing. Mr Haidle’s play is how we get stuck into patterns that are molded by hurts, which cut us so deep; they last past our life and into the next generation. For Beauty, she wants so much for her family to stay together, that she stops talking and eating normal food in order to harbor the burden. Even in the end she has searched and cannot rest until she buries the past and makes peace. She stays trapped in the age where the hurt began. A long time ago I learned that if a person has been abused and has never talked about it they will on their deathbed. They unburden to have peace, so the concept is not that outrageous.

The cast is uniformly well presented. Quinto is the rock of the piece. Understated in the first section, full of life in the second and burdened, yet hopeful in the finale. Mr. Hutchison, lets us understand the depression of life as Mr. Bloom shows us a man whose body and mind have betrayed him. Ms. Richardson is ethereal wanting so much to please and Ms. Tunney is warm, loving and oblivious to the pain around her. The direction by Ms. Kauffman clean and painfully clear.

Smokefall was acclaimed in Chicago, where it had two separate runs at the Goodman Theater. It debuted in Southern California, to not so much acclaim. Not surprising considering their surface of living techniques.

Smokefall is a play that is heartbreaking in its realism and truths; the question is will audience see what is in front of their eyes?