In 1995 Smokey Joe’s Cafe ran on Broadway for 2,036 performances, not bad for a musical revue. After seeing its newest incarnation at Stage 42, it is easy to see why this infectious lovefest to the songwriting team Jerry Lieber and Mike Stoller was so honored. This new production is filled with the same amazing songs that have and will last a lifetime. Soaked in a feeling of nostalgia, this irresistible show will also bring a new legion of fans. 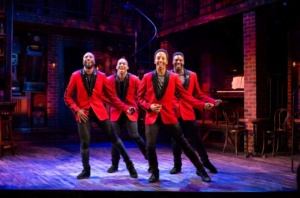 Loaded with talent, this cast of five guys and four women sing in harmony, with perfect musicianship. First up to impress is Max Sangerman with “Ruby Baby”. He returns to sing the iconic “Loving You”. Then Jelani Remy does an off-the-charts “Jailhouse Rock”. Dionne D. Figgins is the ultimate gold digger in “Don Juan” as she brings a lot of the comedic choreography to life. Alysha Umphress, who is remembered for her work with director/choreographer Joshua Bergasse in On the Town, croons “I Keep Forgetting” with enough runs to keep you dizzily thrilled. She also impresses on “Trouble” and “Pearl’s a Singer”. Dwayne Cooper brings his low bass and comedic timing to “Yakety-Yak” (“Don’t talk back”) and “Charlie Brown” (“He’s a clown”). Emma Degerstedt shows she can “Teach Me How to Shimmy” with fringe unable to stand still, but she looks like the girl-next-door instead of a seductive thing. Nicole Vanessa Ortiz belt’s out “Hound Dog” and has you completely understanding those lyrics. Ms. Oritz also impresses on “Fool’s Fall in Love” and ends the show with a rousing “Saved”. Kyle Taylor Parker makes “There Goes My Baby” and “Love Potion #9” seductive and heart pounding. And John Edwards brings the house down with his powerful rendition of “I Who Have Nothing”. 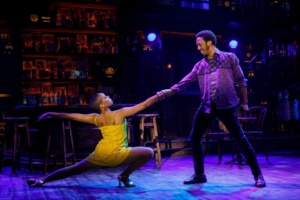 Joshua Bergasse is someone to keep your eye on. Making his directing debut, he infuses a gambit of emotions into this piece. In “Dance with Me” he has Figgins going through the company of men looking for the perfect dancer, and the result is hilarious. 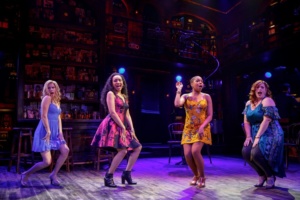 Beowulf Boritt’s two-level set feels like home. He has allowed for the fabulous eight-piece band to join in on the action on a movable platform. Sherrod Barnes, Doug Derryberry on guitars, Yuka Tadano on Bass, Brandon Wright on reeds, Eric Brown on drums, Wilson Torres on percussion, Matt Oestreicher and Doug Derryberry on dueling piano’s make you want to dance. 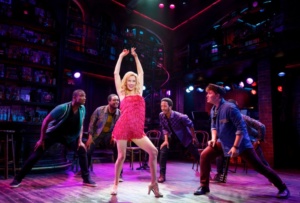 Smokey Joe’s Cafe is a throwback to an era gone by when life was simpler, and we didn’t read into things. Instead, it is a night filled with Pop, R&B, gospel, a little bit of rock, soul, a lot of doo-wop and is exactly what we need. 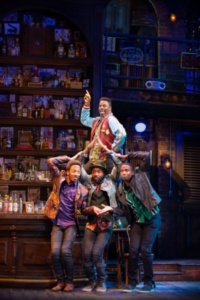 Suzanna BowlingFebruary 25, 2021
Read More
Scroll for more
Tap
Up Close and Personal With Be More Chill’s Will Roland
Newsies Jumps and Leaps To The Top at The John W. Engeman Theater