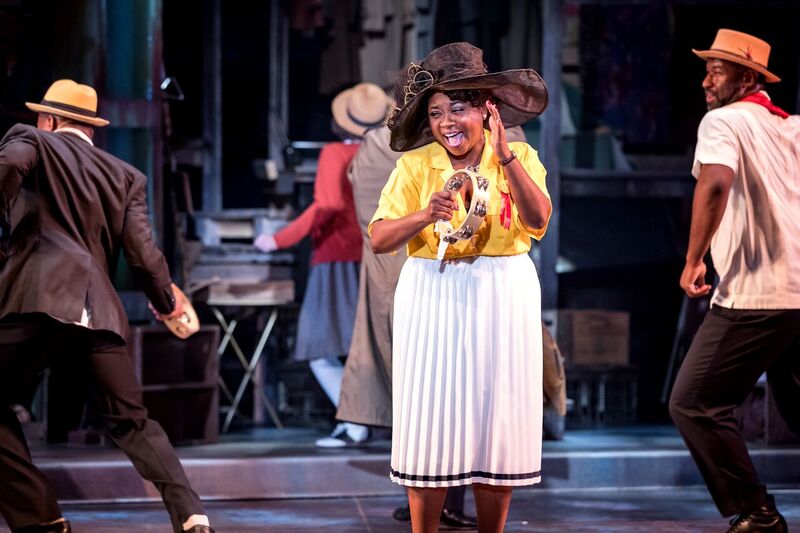 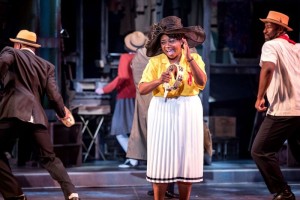 As the leaves begin to turn from green to rust, and the smell of pumpkin spice takes over, well, everything, the suburbs of Chicago are housing some really fantastic theatrical options. Out at the Drury Lane in particular, is a refreshed and spectacular revival of the jukebox musical, Smokey Joe’s Café, proving itself is a toe tapping and foot stomping romp of a good time. I am happy to report this show truly is so much better then it needed to be. This revue celebrates the work of Jerry Leiber and Mike Stoller, who may not be household names, however their array of classic hits certainly are.  39 pop standards make up the soundtrack of the entire show, sung almost the entire way through. It is important to note there is no overall narrative collectively linking the songs. Each three to four minute novelty song, dreamy ballad, or infectious melody is its own self-contained tale. Cleverly directed and choreographed by Marcia Milgram Dodge, the impressive scenic design of Kevin Depinet mesmerized. This update is set in Chicago’s 100 year old historic Maxwell Street Market, included on stage, the Café, a bus stop, a fire escape, and additional intimate alcoves where this troupe of triple threats shake, shimmy and sing their collective faces off, to an array of rock and roll and blues anthems peppered throughout this tribute to 1950’s and 1960’s pop culture.  For a little history lesson of the show itself, when Smokey Joe’s Café initially played on Broadway, it became the longest running musical revue in Broadway history, playing a total 2,036 performances between 1995 and 2000. Not bad for a show with no noticeable narrative. Café went on to be nominated for seven Tony awards, including Best Musical and won the Grammy Award for Best Musical Show album. This is clearly no dusty walk down memory lane. Vital, fresh, enthusiastic and a great deal of fun, the cabaret extravaganza that is Smokey Joe’s Café is Baby Boomer nirvana! 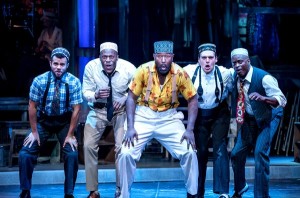 This revival is a crossroads of philosophies, blended together with tight, crisp, delicious harmonies. While performing “Neighborhood” and “Stand By Me”, each member of this melting pot of cultures had equal opportunity to shine. Little Walter, The Bum  (Justin Keyes) brought the laughs while Pearl, the Street Performer (Carrie Abernathy) added a touch of class, giftwrapped in lavender.  Rod, The College Boy (Will Skrip) sang of his passionate devotion for his…..car, while Annette, The Waitress  (Amy Orman) begged to be taught how to shimmy, while exuberantly rocking out in her form fitting crimson fringe dress. The always enjoyable Meghan Murphy returned to the Drury as the soulful Ruth, The Maxwell Street Dweller often partnered with another returning  Drury musical theater veteran, Sean Blake, playing Sonny, The Hustler.  Doc, The Mechanic  (Tyron Robinson) utilized his powerful, wall-shaking bass and giggle inducing comic timing, especially during “Charlie Brown” while Cornelius, The Soldier  (Chris Sams) displayed his washboard abdominal musicals, much to the delight of several female audience members, based solely on the range of constant cat calls from multiple women in attendance, while keenly crooning “Spanish Harlem”. 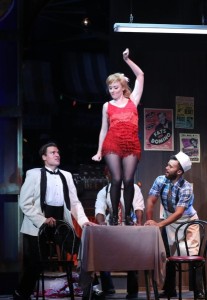 While everyone served their individual material well, the true standout amongst this crew was Donica Lyn as Willie Mae, The Café Proprietor. Jeff Award nominated for her recent portrayal of Effie White in Dreamgirls, her powerfully epic, almost spiritual, vocal runs demonstrated she may be on her way to yet another, well deserved, nomination.  Lyn’s spectacular singing style, riffing a gospel fueled version of “Hound Dog”, had us all but forgetting about Mr. Presley. Although he did get his due too. “Jailhouse Rock” with its Elvis inspired, hip swiveling and knee jerking choreography, all but had members of the audience jumping out of their lush, comfortable seats. Backing up these amazing singers, The Maxwell Street Band, including conductor and keyboardist Chris Sargent, baritone saxophonist Alex Beltran, guitarist Buddy Fambro, bass player Chuck Webb and percussionist and drummer Ben Johnson. 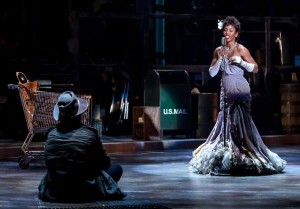 Additional musical soundtrack highlights included “Fools Fall In Love”,  “Poison Ivy”,  “On Broadway”,  “Yakety Yak”, “Love Potion #9” and a rousing rendition of “There Goes My Baby.”  My personal favorite, “I’m a Woman” an exceptionally powerful, lusty, unapologetic feminist anthem, brazenly belted out by the cunning quartet, Murphy, Abernathy, Lyn and Orman, whose pooled voiced “girl power” was more than worth the price of admission. Wrapped in costumes crafted by Sully Ratke and carefully swathed in lighting designed by Paul Mille, Café added strong visuals to enhance the familiar music.  The visible chemistry between cast members was delightfully and overly abundant.  Do yourself a favor and book a reservation for the highly enjoyable Smokey Joe’s Café while you still can. The service displayed here will leave you with nothing but a smile. 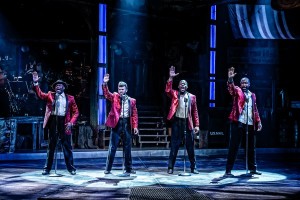 Smokey Joe’s Café is now playing at the Drury Lane Theatre through October 23, 2016 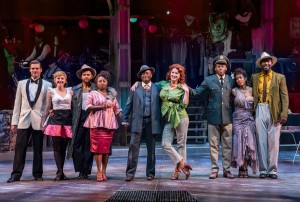