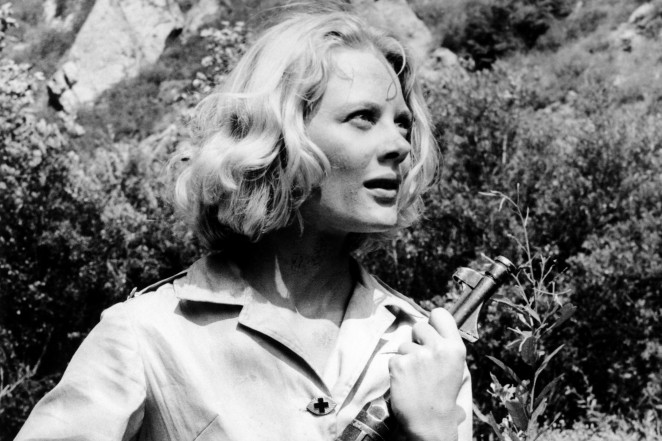 Shirley Knight has died of natural causes April 22, 2020 at her daughter Kaitlin Hopkin’s home in San Marcos, Texas. She was 83.

Shirley appeared in more than 50 feature films, television movies, television series, and Broadway and Off-Broadway productions. She was a lifetime member of the Actors Studio.

Knight began studying to be an opera singer at age 11 and 14, she wrote a short story that was published in a national magazine. She studied at the Pasadena Theatre School and began her film career in 1959. She then went to New York and began her theatre career. She trained in acting with Jeff Corey, Erwin Piscator, Lee Strasberg, and Uta Hagen at HB Studio.

Knight’s stage credits include Three Sisters (1964), We Have Always Lived in the Castle (1966), Kennedy’s Children (1975), which earned her the Tony Award for Best Performance by a Featured Actress in a Play, and A Lovely Sunday for Creve Coeur (1979).

She was nominated for the Drama Desk Award for Outstanding Actress in a Play twice, for Landscape of the Body and The Young Man from Atlanta, for which she received another Tony nomination. She also appeared in Come Back, Come Back, Wherever You Are, (2009) an original play by Arthur Laurents.

In 1976, Knight won a Tony Award for her performance in Kennedy’s Children, a play by Robert Patrick. In later years, she played supporting roles in many films, including Endless Love (1981), As Good as It Gets(1997), Divine Secrets of the Ya-Ya Sisterhood (2002), and Grandma’s Boy (2006).

For her performances on television, Knight was nominated eight times for a Primetime Emmy Award (winning three), and she received a Golden Globe Award. Knight, became a Warner Brothers Television contract star who while on breaks filming movies appeared in television series such as Maverick, Bourbon Street Beat, Sugarfoot, Cheyenne, The Roaring 20s, Target: The Corruptors!, The Eleventh Hour, The Outer Limits (“The Man Who Was Never Born”),  The Reporter, The Fugitive, The Invaders, The Virginian, Murder, She Wrote, Thirtysomething, Law & Order, L.A. Law, Law & Order: Special Victims Unit, Maggie Winters, ER,  House M.D., Crossing Jordan, Cold Case, and Hot in Cleveland, among others. Knight also appeared in Barnaby Jones in the episode titled “Fantasy of Fear”.

She appeared in various television movies, including Playing For Time and Indictment: The McMartin Trial. For the latter, she won both the Emmy Award for Outstanding Supporting Actress in a Miniseries or a Movieand the Golden Globe Award for Best Performance by an Actress in a Supporting Role in a Series, Mini-Series or Motion Picture Made for Television. Her guest performance in thirtysomething earned her a 1988 Emmy for Best Guest Performer in a Drama Series. She won an Emmy in 1995 for her guest performance in the NYPD Blue episode “Large Mouth Bass”.

She appeared in the first segment of If These Walls Could Talk. She also had a recurring role on Desperate Housewives.

Bob BlumeJanuary 8, 2021
Read More
Scroll for more
Tap
Newcomers Guide to Kodi and the Entertainment Benefits It Brings
How Are We Coping With Self Isolation: Insight From Around the Country With Zach Ramos