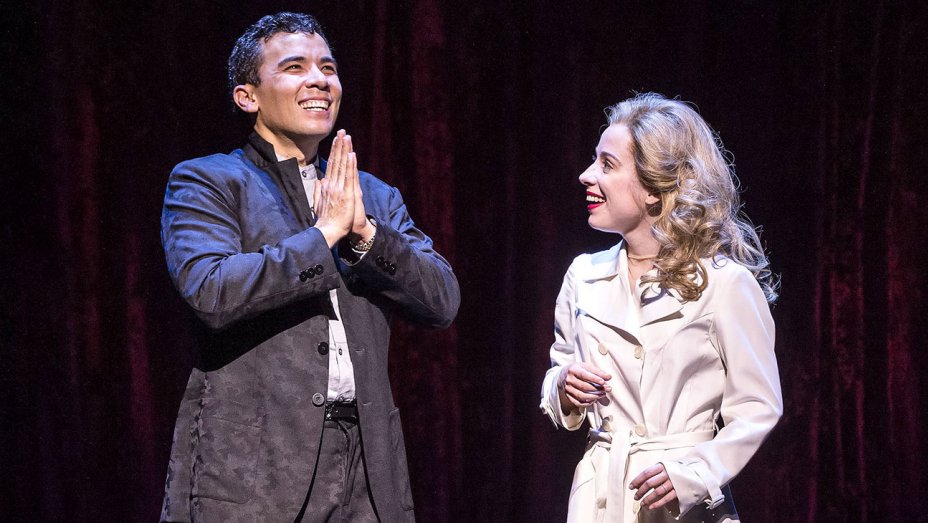 David Henry Hwang and Jeanine Tesori’s Soft Power, feels like what happened after “Next” in Pacific Overtures (I know Japan, not China). The music is gloriously played by an overture of 22 and sung by a cast that is marvelously talented. It is lush, tuneful, an homage to musicals gone by and clever.

Not normally a fan of listen to my therapy, plays, musicals or cabaret acts, this inventive, satirical, caustic show won me over. David Henry Hwang (DHH) on November 29, 2015, was stabbed in the neck while walking home from his grocery store in Brooklyn. He nearly died. Soft Power, is his New Brain moment.

The show starts… as DHH (Francis Jue), is hired by a Chinese stage producer Xūe Xíng (Conrad Ricamora) to write an adaptation of “Jiang Cuo Jin Cuo!”, which translated means “Stick with Your Mistake”. This popular Chinese film promotes monogamy, whether it’s happy or not and DHH rewrites the ending to make it more palatable. Xūe is about to break up with an American actress, Zoe (Alyse Alan Louis), his “assistant,” due to his marriage and child because of his belief in “Stick with Your Mistake”. The three of them attend a fundraiser for presidential candidate Hillary Clinton at Lincoln Center for The King and I. Once DHH favorite musical, he now sees the show as disturbing, since the King is influenced by a white American women. Xūe who runs off to see someone from Disney Theatricals from Asia, ends up smitten after meeting Hillary. Xūe does not believe in democracy or our voting system. After Hillary loses DHH is fired due to his rewrite. On his way home to Brooklyn, he is stabbed in the neck.

As DHH is on a gurney fighting for life and death, we now see The King and I, the way DHH sees it, however we learn we have been watching a Chinese musical based on the events 50 years ago and the musical begins again. Xūe leaves his country to travel to America, where he is met by blonde, criminal and gun carrying Americans. Hillary who looks a lot like Zoe, is at a fundraiser at an over the top McDonald’s. As she loses again, she shoves her face full of pizza and Bryer’s mint chocolate chip ice cream, while singing “Rebel Safe House”.

Xūe goes to her and the two fall in love LA LA Land style. Inaccuracy’s start to build. The Golden Gate Bridge is located in Manhattan, McDonalds is the finest restaurant, everyone carries a gun, well you get it. Xūe goes to Washington to talk sense to the new administration, when they threaten war with China. Xūe wins the conversation and goes back to Hillary with the news. They break up because of democracy something that Hillary believes in and Xūe does not. The cast gets together for a way to pat ending, that seems more kumbaya.

Jue nails DHH. I have met the man and he is flawless in his performance. Ricamora, is sexy with a beautiful voice. I expect to see way more of this powerful presence. Ms. Louis, is wonderful both as Zoe and as Hillary. She sparks chemistry with Ricamora and delivers pure joy. Shout outs to Jon Hoche, Austin Ku, Kendyl Ito and the ensemble that does a wonderful job.

Soft Power gives us take offs of The Music Man, Pirates of Penzance, My Fair Lady, Bells Are Ringing, Merrily We Roll Along, Assassins, and Road Show, as well as Robbins, de Mille, Bennett and Fosse. The problem with Soft Power is some of the elements don’t mesh together well.

Leigh Silverman’s direction is flawless. Sam Pinkleton’s (of The Great Comet) choreography is a delight. Clint Ramos sets and Anita Yavich’s costumes are fantastical and sparkling. The music is impeccable thanks to orchestrator Danny Troob (with John Clancy and Larry Hochman) and music director Chris Fenwick.

This show may be flawed, but is a lot of fun and a delightful entree into this seasons selections.

Soft Power: a co-production with the Center Theatre Group of Los Angeles and the Public Theater, 425 Layfette St, until November 17th.

Suzanna BowlingMay 12, 2022
Read More
Scroll for more
Tap
The Independents Brings to Life The Art of Mary Cassatt and Edgar Degas
“Heroes of the Fourth Turning” – Let the Conversation Begin