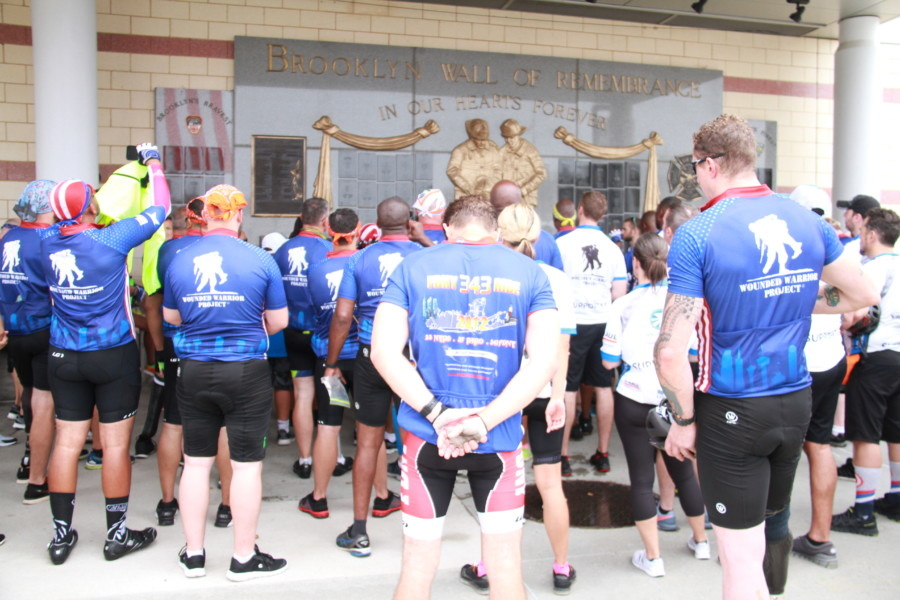 Today a group of approximately 50 wounded warriors completed their first day of Soldier Ride New York today. The 19-mile ride started in Manhattan and ended at Coney Island, and included the assistance of FDNY, NYPD, and other community supporters. The day ultimately culminated with a trip to NFL headquarters. Warriors had the opportunity to tour the office and meet NFL Commissioner Roger Goodell.

Wounded Warrior Project (WWP) and the NFL work together to engage wounded veterans with programs and resources that empower them to live their lives to the fullest, on their own terms, and at no cost. This year, the NFL has increased their support to enable WWP to completely replace its fleet of adaptive bicycles. This not only ensures the warriors served through Soldier Ride are safe on the road, it enables what is often the first opportunity for warriors to connect to WWP’s programs.

More than 50 American wounded warriors from across the nation and four British Armed Forces patients from BLESMA will join Wounded Warrior Project® (WWP) for Soldier Ride® New York. The four-day cycling event returns the organization to its founding roots 16 years ago when Long Island native, Chis Carney, cycled more than 5,000 miles from the Hamptons to San Diego to raise awareness for wounded warriors.

Reconnecting warriors to one another in the civilian world is critical to healing. This is why WWP is dedicated to ensuring every injured veteran supports each other in recovery, thus embodying the WWP logo of one warrior carrying another off the battlefield.

In a 2018 WWP survey (https://www.woundedwarriorproject.org/survey) of the wounded warriors it serves, more than half of survey respondents (52.6%) expressed they talk with fellow veterans to address their mental health concerns – the second most cited helpful resource or tool. In the same study, 32.6% also reported physical activity as one of the things that helps them cope with stress and emotional concerns.

Soldier Ride takes warriors across the nation, visiting dozens of American cities. While the location of each ride changes, one thing remains the same: Soldier Ride connects warriors to each other and their local communities, creating a strong support system to help them manage visible and invisible wounds of war. The program continues to have a lasting, restorative impact on countless veterans and service members.

Soldier Ride® began in 2004 when civilian Chris Carney cycled more than 5,000 miles coast-to-coast to support WWP and help raise awareness for injured veterans. The following year, several combat warriors who returned from Operation Enduring Freedom (OEF) with visible and invisible injuries joined Carney for another cross-country ride. The trek across the nation proved to be a milestone on the journey to recovery as wounded warriors redefined their personal strengths and limitations. Despite facing many obstacles, the warriors refused to give up. They used the experience as a catalyst to show the public and themselves that with support and motivation, anything was possible.

Today, Soldier Ride continues to inspire warriors to heal their bodies and minds. This year, almost 1,000 riders participated in more than 30 Soldier Ride events nationwide. Soldier Ride has become a gathering that connects American heroes to each other and their communities and provides the American public an opportunity to honor that service and sacrifice. Read more at http://woundedwarriorproject.org/programs/soldier-ride.

Since 2003, Wounded Warrior Project® (WWP) has been meeting the growing needs of warriors, their families, and caregivers – helping them achieve their highest ambition. Learn more.