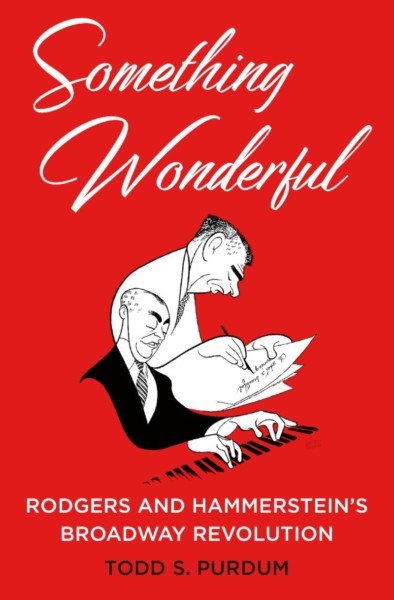 Something Wonderful: Rodgers and Hammerstein’s Broadway Revolution is Released Today

Something Wonderful: Rodgers and Hammerstein’s Broadway Revolution is Released Today 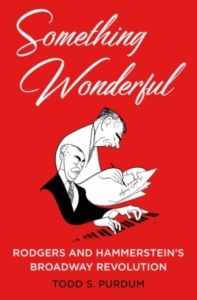 Richard Rodgers and Oscar Hammerstein II’s first musical, Oklahoma!, opened on Broadway on March 31, 1943, and turned  75th March 31st.. That show, along with Carousel (whose new Broadway revival opens on April 12), South Pacific, The King and I, and The Sound of Music firmly established Rodgers and Hammerstein at the apex of the great age of the American Songbook. The two men had previously written dozens of Broadway shows with other collaborators, but together they pioneered a new art form: the serious musical play. Their songs and dance numbers served to advance the drama and reveal character, a sharp break from the past and the template on which all future musicals would be built. 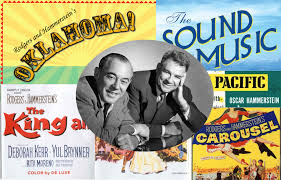 Todd S. Purdum’s portrait of these artistic partners, SOMETHING WONDERFUL: Rodgers and Hammerstein’s Broadway Revolution [Henry Holt and Company; April 3, 2018; 978-1-6277-9834-1; $32.00; hardcover; 400 pages], offers a fresh and revelatory look at the personalities of these legendary figures, their relationship with each other, their creative process, and their groundbreaking innovations.
SOMETHING WONDERFUL is full of illuminating anecdotes about the biggest stars of the day, including Ethel Merman, Yul Brynner, Mary Martin, and Julie Andrews, as well as Stephen Sondheim and Irving Berlin, both of whose work benefited from their association with Rodgers and Hammerstein. Purdum introduces readers to many other creative artists on the R&H team whose contributions and innovations are not as well known but should be. He also sheds light on the partners’ emotionally distant relationship, even as they created one of the most profitable and powerful entertainment businesses of the twentieth century.
Although Rodgers and Hammerstein had their failures and flops, and more than once feared they had lost their touch, this legendary duo were cultural powerhouses whose work came to define postwar America on stage, screen, television, and radio. SOMETHING WONDERFUL is a vivid celebration of the lives and legacy of one of the most iconic partnerships in artistic history, sure to please anyone who loves musical theater.
Todd S. Purdum is the author of An Idea Whose Time Has Come and A Time of Our Choosing. He is a contributing editor at Vanity Fair and a senior writer at Politico, having previously worked at The New York Times for more than twenty years, where he served as White House correspondent, diplomatic correspondent, and Los Angeles bureau chief. A graduate of Princeton University, he lives in Los Angeles with his wife, Dee Dee Myers, and their two children, Kate and Stephen.
“Readers will learn the stories behind the music and how this most successful of writing duos crafted some of the finest musicals to grace the American stage. . . . Something wonderful, indeed.” –Booklist, Starred Review
An exuberant celebration of musical genius.” –Kirkus Reviews
Get your copy here .
Related Itemsand Julie AndrewsEthel MermanIrving BerlinMary MartinNewRodgers and HammersteinSOMETHING WONDERFUL: Rodgers and Hammerstein's Broadway RevolutionStephen SondheimTodd S. PurdumYul Brynner
Book Reviews