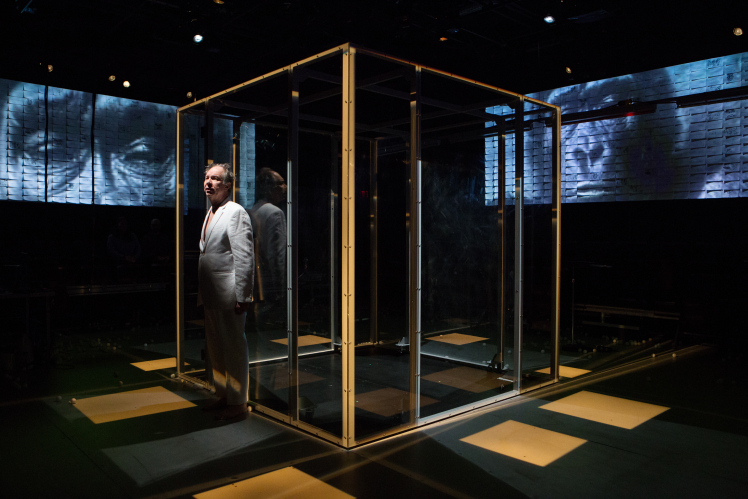 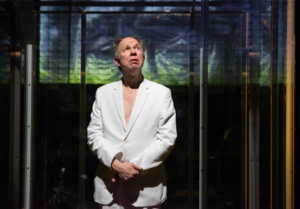 I was concerned walking in. Not entirely convinced that this show was the kind of show I would enjoy. It sounded a bit too 70’s experimental performance art piece rather than theatrical experience. And that concern was pretty spot on, as it turns out, I’m sorry to say. Exploring the tension that exists between the outside and the internal cages of the human mind and our physical world, this piece, for me, fell flat. Maybe it never even raised itself up enough to fall, but flat it did remain. Inspired by apes in cages at the zoo, expanded to deconstruct the ideas of Zen buddhism, and dive into the concepts presented by American avant-garde composer John Cage, Cage the play, if you dare to call it that, is inherently difficult. Structured around his infamous 1952 piece of music titled 4’33”, in which the score instructs the performer not to play their instrument during the entire duration of the piece. That creation is commonly thought of as environmental sounds that the listener creates while hearing the sound of silence. This study is a bit more than just that. It starts there, and continues beyond, playing with that idea by splitting the entire show into 12 movements, each one that exact length of time.  Each evolve or revolve around a concept of time, space and matter, all created by actor Diego Matmoros, sound designer Richard Feren, and production designer, Lorenzo Savoini. But none, for this theater-goer, ever grabs hold.

Parceled out singularly at first in the same conceptual framework as Cage’s, Savoini (set and lighting designer for Of Human Bondage) messes with lighting for the first segment.  Red and white florescent lights, flickering on and off for four minutes and thirty-three seconds.  I must admit, my heart sank a bit, that this is what I was going to have to witness for the next hour. Images and quotes from Cage are projected on all four walls of the theatrical cage that we find ourselves stuck in.  One such telling quotes suggestions that “the act of listening is in fact an act of composing”.  This quote is followed by a segment of Feren (composer and sound designer for Soulpepper’s Angels in America) creating amplified sounds made from ordinary objects under a microphone hanging from the ceiling.  Ping pong balls are played with, horns blown, and eggs are beaten, in an abstract reference to Cage’s ‘prepared pianos’ (a piano with its sound changed by ordinary objects placed between or on its strings or hammers) that he used to compose many of his scores. Dice are rolled after a glance to the stopwatch countdown projected on the wall, making me wonder if order and design is being played out by chance and how the dice is cast.

It’s clear the three, plus stage manager, Arwen MacDonell, are fully committed to the piece and it’s purpose.  Savoini draws and paints concepts and theory of sorts on the walls of the cage.  Feren experiments with other sounds and creates music from an actual fiddle, while doing the same with static from a number of old radios. For four minutes and thirty-three seconds per segment. “If something is boring after two minutes, try it for four. If still boring, than eight. Then 16. then 32. Eventually one discovers that it is not boring at all.” Or so states another quote. But what happens if after 6o minutes, the boring never really fully goes away.  What to do if the tediousness of the experiment remains flat and un-engaging after all that time? 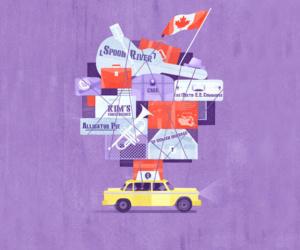 Cage, the only new production being showcased here in New York, never really lands you anywhere, nor does it try.  There is no journey that you are being guided on or through, just an exercise in creation and examination.  It’s brave but I wish it was more thought provoking, at least for me.

Soulpepper, the Canadian Theatre Company that was taken over the Pershing Square Signature Center, is presenting numerous types of theatrical shows for the month of July. Kim’s Convenience is reality theatre, a play about a specific immigrant family’s experience in Canada, that takes place in a very authentic convenience store recreated exactingly on stage. It feels like this expertly done play could be filmed almost as is, and it would still be as perfect as it is here. Of Human Bondage, is the kind of theater I love the most, a narrative piece of story-telling that utilizing theatrical magic, metaphors in space and movement, stylistic directorial ideas, and abstract scenarios. Much like the magnificent Indecent on Broadway. (Go see them both while you still can!) All the creative and interesting aspects of live theatre are used to tell this one central story. It’s told in a way that couldn’t be told using any other medium. This is what theatre, in my mind, is created for. Similarly, Spoon River utilizes theater in a similar manner, but in this musical, the main purpose is not to tell just one grand story, but a compilation of tales to create a moment of time and a peek into a life other than our own.  All three succeed marvelously, utilizing the aspects of what theatre is expertly and emotionally.

Cage is another beast. Matamoros, Savoini, and Feren are showcasing performance art using themes of space, light, video, sound, objects, and text to create of collage of ideas and experience.  It reminds me of experimental theatre that took place decades ago in places like New York City’s East Village.  I’ve seen some of it recently, in works like MYTHO? Lure of Wildness at the Abrons Center and the more thoughtful but also frustrating Richard Maxwell’s Good Samaritans. Both felt like ancient artifacts stuck in an older idea of theatrical performance art. And while Cage doesn’t carry the feeling of artists stuck in an old mindset, it still struggles to connect.  It feels modern and thoughtful, but ultimately, this twelve creative happenings fail us, leaving us all caged and trapped in the Studio Theatre of the Signature Center. Not the way this Canadian wanted to end my celebrational experience with Soulpepper, but I’ll set it aside, and remember the other three shows that engaged and thrilled me. The three main stage productions will be some of the best theatre of the summer.  And while some will like Cage, and maybe even love this conceptual meeting of art and theatre, this creation left me feeling like a caged beast; bored, disconnected, and anxious to escape.