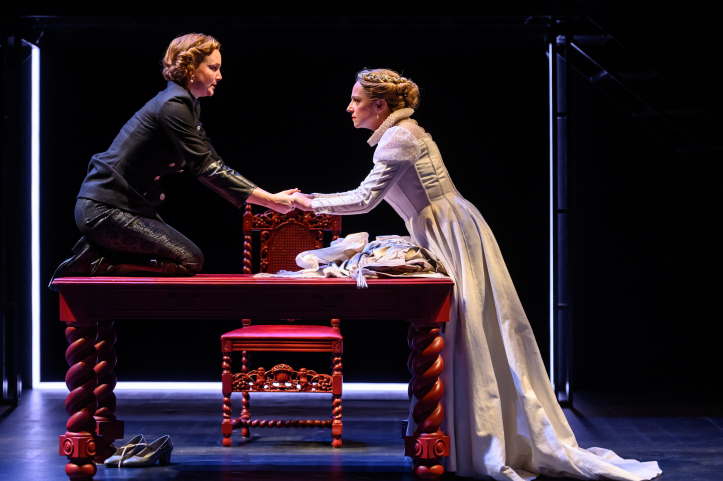 I’m totally excited and honored. I just have to say that upfront. Mainly because my first official foray into Canadian and Torontonian theatre, I was royally blessed most assuredly with seeing Soulpepper Theatre’s spirited Mother’s Daughter, a strong and modern examination of women and power, majestically laid out before us on a dazzling gold table by Kate Henning. It’s her third installment in the Queenmaker Trilogy of plays, something now I’m going to have to seek out and read, that revolve around the British Tudor period. But what makes it so fascinating and relevant, at least to these virgin eyes, is Henning’s whip smart tact, turning and examining their world through the eyes of its women. Mother’s Daughter is seeped in monarchy history, but it is wildly and forcibly presented with a modern vernacular that adds punch and power to the epic story of the Virgin Queen. It makes it relevant and relatable in a way that history sometimes defies.I must admit that this piece of Royal history is not so well known to me as maybe the other Elizabeth and Mary Queen of Scots. That tale has been ridden out before us many many times through numerous plays and films, (I appreciated the jab at the end of this predicament) but Playwright Henning (The Last Wife, The Virgin Trial) takes on this battle gleefully, challenging us to look deeper into the well known crowning of Elizabeth I, aka The Virgin Queen, and investigate the terrain with fresh eyes and ears.  To first uncover the historic quagmire that actually saw sister Mary occupying the thrown first, and from that vantage point, untangle the battle of a daughter desperately trying to legitimize her dead mother’s legacy and contested choices in a world of men and their politics. That’s a story I didn’t know, and I’m ever so thankful for Henning to grant me this look into Mary’s dilemma, particularly through this modern vantage point.

Rising up on a stark traditional Shakespearean set, the dramatic thunder roars, setting the conflict on its well trodden path. Gracing the stage in both modern dress and within a bold idiosyncratic historical context, courtesy of the talented costume and set designer Lorenzo Savoini (Soulpepper’s Of Human Bondage), the play charges forward into battle, thrusting forward rivalries that are both complex and believably contradictory, with the magnificent Shannon Taylor (Stratford’s The Crucible) at the helm. She portrays a Mary both proud and unsure, turning to the vision of her mother, King Henry VIII’s first wife, Spanish Princess Catherine of Aragon, played most royally by Fiona Byrne (Soulpepper’s Waiting for the Parade), for guidance, at least until old school aggression takes the lead. Bryne’s use of Shakespearean tone against Taylor’s swift sharp delivery cuts strong, makes it clear what side of history we are on. “What is handed down to us?“, is a question this Stratford Festival production throws forward with the weight of history on its back, as Mary stands strong against the short lived crowning of her rival and teenaged cousin, Lady Jane Grey, gorgeously portrayed with saintly vision by Andrea Rankin (Citadel’s Make Mine Love), and takes the crown for her own, as her more ambitious and headstrong sister, Bess, dynamically embodied by Jessica B. Hill (Segal Stage’s Enemy of the People), stands beside her, urging her forward. But for what purpose?

“What are you going to do with Jane?” the Queen is asked, and the light, beautifully crafted by Kimberly Purtell (Soulpepper’s Sisters) flickers as the visionary past steps into view, changing the tone and challenging a modern approach to power and control with authoritarian cruelty. It’s a complicated and engaging dynamic, particularly the battles for power between Jane Gray and Mary, that reverberates with spiritual engagement and understanding. It fills out the historic dilemma while offering no modern solution. But there is also Mary and her power house sister, Bess, who stand strong side by side and possibly against one another, waging war between the head and the heart with a compelling authenticity that resonates.

History knows the outcome of the war between head and heart, and as purposefully laid out by director Alan Dilworth (Soulpepper’s Winter Solstice), Mother’s Daughter gamely goes to war with historic expectations and tradition, using dialect and modern language as sword to fight against tradition. “You will not fall“, Queen Mary is told as she steps forcibly up on that majestic gold table taking control of her forces while also listening intently to her two closest but often opposing viewed female advisors; the hilariously effective Susan, deliciously portrayed by Maria Vacratsis (Soulpepper’s Escaped Alone), and the strong determined Bassett, diligently played by Beryl Bain (Grand’s The Mountaintop). The three almost take pleasure from putting the one male, Simon, well played by Gordon Patrick White (Neptune’s The Devil’s Disciple), down to his lower place of rank and position, as it is he and the world weary tradition of King Henry VIII that leads with aggression and violence over understanding or empathy.

“Butch enough?“, the Queen says as she takes a stand of authority against an onslaught of hostile forces, much like this Soulpepper production does with Henning’s precise interpersonal dynamics and clear strategic vantage point. This Mother’s Daughter releases the hounds in all its glory, finding the complications and conflicts of ruling under the crown and delivers it with a might that captivates. “You have to be a complete asshole to do this job.” And maybe that’s true, but this production gallops forward into battle with such assurance that we can only sit back and be ruled most gloriously by Queen Taylor and her band of feisty troops. Thanks Soulpepper for making my first foray so majestically exhilarating.

Theatre News: Mean Girls, Broadway at The Oscars and Grammy’s, The Movie,Neil Diamond Emojiland
Broadway Con 2020 Number 5 is so Alive