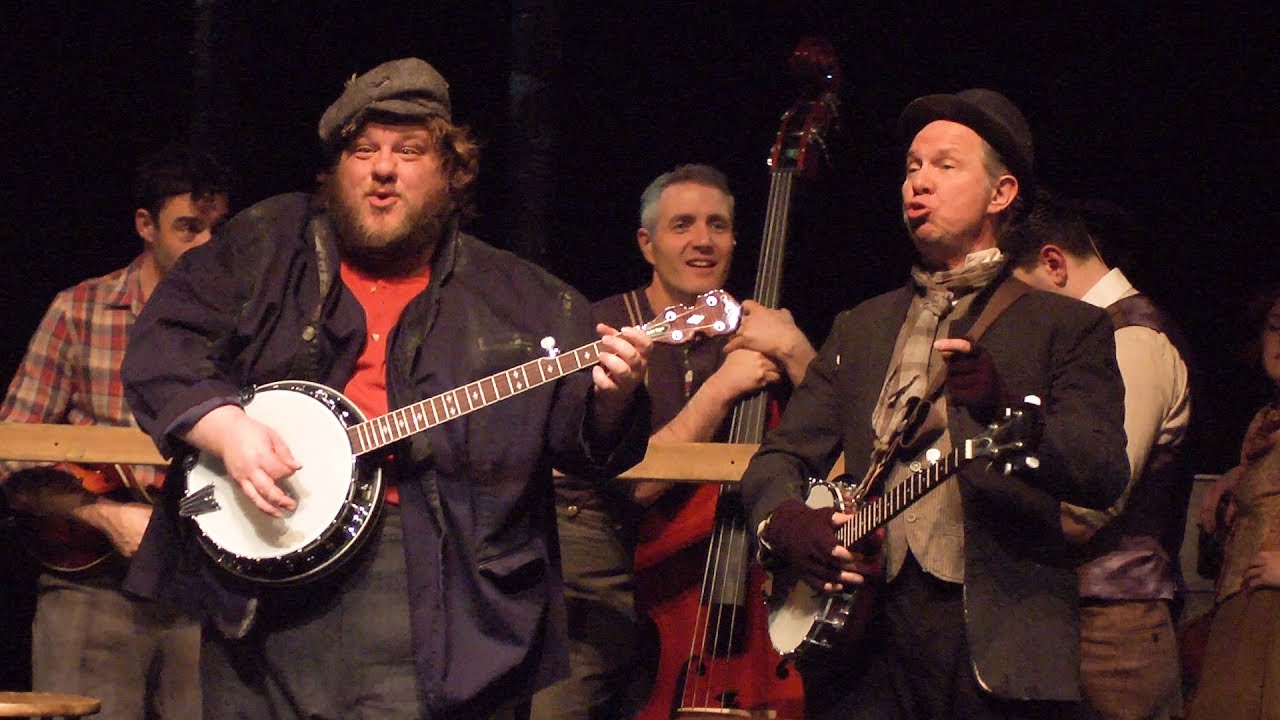 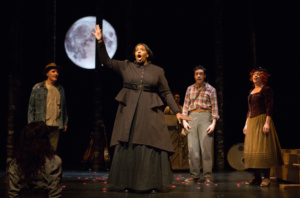 I’m not sure what it all means, but we seem to have a strong desire to hear from the dead. Especially concerning the period of time and history that the Spoon River Anthology monologues were first written about by Edger Lee Masters.  His series of poems were written in an attempt to demystify the life of small town America in the early 1900’s. With this musical jamboree style adaptation, Spoon River, brought to NYC by the highly inventive Soulpepper Theatre Company from Toronto (my homeland), director Albert Schultz (Co-Creator), in collaboration with composer Mike Ross (Co-Adaptor, Music Director & Performer), stay close to the text and the ideas of Masters. Within their creation, numerous and small intimate glimpses are given into the quintessential rural life. It brings to mind Our Town, and also a personal Canadian favorite, (one we did in my high school in London, Ontario), Peter Colley’s The Donnellys. Both stage plays have moments from beyond the grave, and give spoken words to dead souls.  They both tend to stay more focused on one particular and distinct storyline; for Our Town, Thorton Wilder staged Act III in the graveyard of Grover’s Corners in order to explore death and dying in America through the everyday lives of its early twentieth century citizens, while The Donnellys takes a look into rural Canadian small mindedness through the telling of a piece of disturbing history from the same time period. (If you never have heard of the Donnellys, give it a look here.) 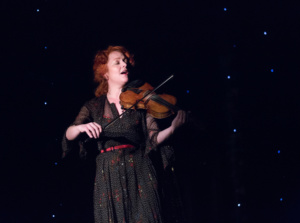 But Soulpepper’s Spoon River has a lot more ground to cover. Masters’ collection contains poems about two hundred and twelve separate characters, all providing two-hundred forty-four accounts of complex small town lives. Most of the power is in the minute details of forgotten scenarios as time surrounding them dutifully marches on. And although discarded by the history books, these moments are meaningful and significant to those involved. The poems create an unabashed landscape of the community of the town of Spoon River, a fictional creation of Masters. In the award-winning musical adaptation, Ross and Schultz attempt to share these stories that come from the other side of the grave, about the townfolk’s lives, loves, regrets, and in some cases, their joy. 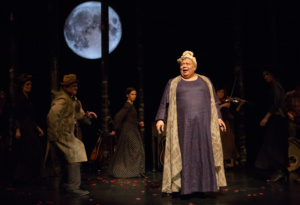 Luckily for us, composer Mike Ross celebrates these wondrous souls more than anything else. He wants to explore and affirm the gift of life, even while acknowledging death and dying. Spoon River chronicles the pain, disappointment, regret, and the discomfort of living, along side the passionate love and lust that pulse through it all. As we are ushered into the theatre, we step back in time and arrive at the funeral and burial of Bertie Hume (a very still Hailey Gillis), a young woman who we are told “fed on life” by Mr. Pollard. Majestically and respectfully played by Diego Matamoros (Soulpepper’s Cage), he leads us in and tells of Bertie, the wonderful woman who is to be buried tonight up on that hill just outside of the small town of Spoon River. “Bertie Hume is at rest now. With our Edmund. And all the others. Sleepin’ “, but not so quietly, we soon find out. 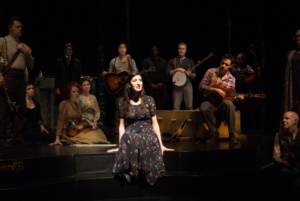 He whimsically shares with us, that “seeing all the names carved into the stones on my way up here tonight, I am reminded of the thousands of the lives that, in their livin’, carved our little town out of the bed- rock.  And I often wonder what they would say to us, if they had the chance.”  With those poetic words written by Masters over a hundred years ago, we are invited into these stories and these tales.  If you are itching for a strong plot-driven night at the theatre (as my companion was), you have come to the wrong house and definitely the wrong hill, but if you can join with this troop of story-tellers, and let it all wash over you, you have definitely come to the right party. 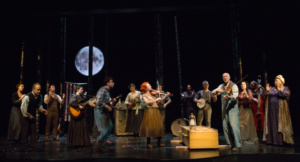 Because, you see, up on that hill on the night of Bertie’s burial is where this lively telling of tales is going to happen. A stellar and talented group of actors are there singing and saying what they need to say in a moonlit graveyard setting designed simply and beautifully by set and lighting designer, Ken MacKenzie (Soulpepper’s The Heidi Chronicles).  They stamp and clap their way into our collective souls, drumming and strumming an assortment of period-specific instruments, including banjos, piano, bass violin, guitars, and more with wild abandonment. Two such wild performers are the superb Daniel Williston (WCT’s Peter and the Starcatcher) who plays a coffin like no other I have ever seen, and the incredible fiddle playing Miranda Mulholland (Soulpepper’s Parfumerie). Each and every one of the fine and amazingly talented actors give it there all, playing numerous characters in both monologues and song dressed in perfect attire by designer Erika Connor (Canadian Stage’s The Rocky Horror Picture Show).

It’s a show about death and dying, but you’d never know by the liveliness and exuberance the music and the cast give off. There are too many wonderful moments and songs to even try to categorize, but a few that come to mind instantly include the opening number, “The Hill” performed by the full company introducing us to what is in store. Other standouts include the numerous couple scenarios that attempt to tell their two-sided tales.  Especially “The McGee’s” (Raquel Duffy and Brendan Wall) who sing a song about marriage that isn’t so sweet. There is a honesty that comes from these Spoon River residents, that evaded them in their living hours, but is much more clear in the after-life. There are the drunks who died while intoxicated, Deacon Taylor (Matamoros) is one, and others who died because of love or jealousy. There is the mother, Emily Sparks (Michelle Monteith) and the mother, Elsa Wertman (Duffy) who both sing of their lost sons, and the lost son, Harry Wilmans (Richard Lam) who sings of his following the flag into war.
There is a touching (and surprising, noting that this was written in 1915) monologue from Albert Husbands (Paolo Santalucia) who states,

“I had my vision, and chose my friend and loved him.

They laughed at first, and then they breathed
The smell of their vile suspicions upon me
and so I fled, and Hid my identity, wandering afar in the west.”

As with so many of these moments, the attachment to pain and love is a strong connecter for us all. Within a few lines, here and there, true beauty can be found in their tales, along with humor and wit. This one in particular unsettled me, but only because I never saw it coming. There is the wonderful performance of Michelle Monteith as the Russian Sonia Widow, who was so astounding in Soulpepper’s Of Human Bondage, just the night before. As is the case with almost all the cast including Oliver Dennis, Stuart Hughes, Courtney Ch’ng Lancaster, Jeff Lillico, and Sarah Wilson.  I had just seen these actors perform the night before in that very different but magnificent production, and here to see them play the piano (Gregory Prest) and sing and dance a gig like John Jarvis as Cleanthus Trilling is awe inspiring.

The whole piece just has such tremendous fun with death, that one can’t help but celebrate along with them the great gift of life.  The exhilarating Jackie Richardson (Ain’t Misbehavin’) as Widow MacFarlane, weaver of carpets, and Alana Bridgewater (Grand Theatre’s Shrek) as Arlette Will bring down the house with their earth shattering performances, making us want to join in and shout “Hallelujah”. The facades of these small town souls have been lifted.  Bertie Hume will rise and join in with this amazing chorus, and she will not be alone in that grave.  These magnificent souls will keep her company, and give her joy, just like they did for these joyous ninety minutes of Spoon River.