Southern Comfort A Show From The Heart

Southern Comfort A Show From The Heart 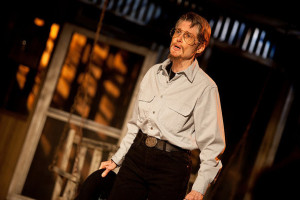 A couple a days ago I wrote an article on why I think Caitlyn Jenner is not to be admired and then I saw the new musical Southern Comfort at the Public Theater. Based on Kate Davis’s 2001 documentary of the same name, we follow the final year in the life of Robert Eads, a female-to-male transgender man who found love with his “chosen family,” in rural Georgia. 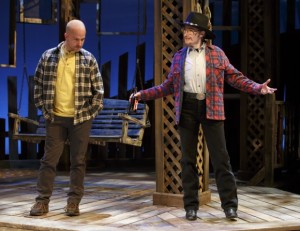 Take plenty of Kleenex to this touching and heartfelt show that is sure to move you. Annette O’Toole (Smallville) plays Eads and it is a performance not to be missed. It will actually take some time, before you realize the romantic lead in all those Robby Benson movies is the scruffy rail thin man in the black cowboy hat. 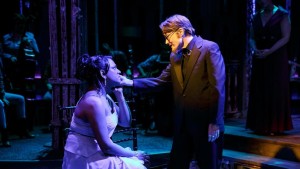 The play begins in the Spring, as the band (Lizzie Hagstedt (Bass),Elizabeth Ward Land (Percussion), David M. Lutken (Guitar), Morgan Morse (Piano) and Joel Waggoner (Violin)) of uber talented musicians sing and act as storytellers. The book and lyrics by Dan Collins and bluegrass score by Julianne Wick Davis are musical gems. As we meet Robert’s “chosen family,” first up is Jackson (Jeffrey Kuhn) a younger transgender man who Robert has raised as his own son, Sam (Donnie Cianciotto) another transgender female to male and his wife, Melanie (Robin Skye) round out the intial group. Robert is excited to introduce them to his lover the strapping Miss Lola Cola (Jeff McCarthy). Still closeted and shy Jackson takes none to kindly to this stranger, despite the cruel fate of Robert having terminal ovarian cancer. Robert refuses to give up making the most of this horrific diagnosis. When Jackson gets serious with Carly (Aneesh Sheth), a transgender woman, he decides to undergo phalloplasty despite Robert’s angry belief that gender is a matter of mind and spirit, not genitals. The show’s name comes from “SoCo,” short for Southern Comfort, the annual transgender convention in Atlanta, where the love Robert and Lola feel, show the pain of what being a transgender person is like as well as the joy. 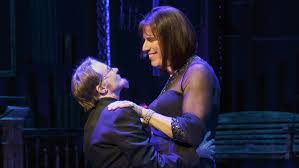 This cast is remarkable, but it is Ms. O’Toole who immerses herself so much into the character, she disappears and we only see Robert. Right now, this is the performance to beat as the best of the year. There is not one piece of Robert we do not know by the end of this. I went and watched the documentary and it is scary how much she has embodied him. Jeff McCarthy, brings humanity, a spirit and a realism to his role. Mr. Kuhn adds a feisty rebellion and energy to add conflict to an already conflicted life. Ms Sheth adds another comic dimension, as does Ms. Skye and Mr. Cianciotto.

Director Thomas Caruso who conceived this piece with Robert DuSold, brings a piece so well though-out and tender to the stage and does not try to over stage but allow the story to enlightening. I was so impressed, I sought out the documentary and now after seeing that, I am even more impressed.

James Fenton’s setting is lovely, as Robert’s family tree becomes a collection of the pieces of our lives.

In an age where we have people like Caitlyn Jenner shoved down out throats, I am so grateful that a piece like this shows the reality and the struggle of those seeking to be comfortable in their own skin and not after fame.

This is a show not to be missed!

I leave you with a video from the production at Barrington Stage, where the cast is almost the same.