Space Dogs: Telling The Story of Dogs in Space in Song 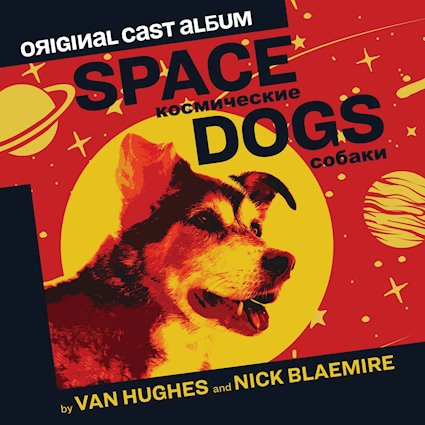 Space Dogs: Telling The Story of Dogs in Space in Song

Sounding very much like Bat Boy or Tick, Tick Boom, Space Dogs written and performed by Broadway’s Van Hughes and Nick Blaemire is very pup driven, with a highly catchy score. The show played at MCC until March 20th. Space Dogs is a new musical, telling the true story of Laika (Nick Blaemire), a stray pooch chosen by the Soviets in 1957 to become the first living creature to orbit the Earth. Chief Designer (Van Hughes), bonds with his puppy astronaut in the third song “A Brief History Of Dogs”.

The first song “The Space Dogs Of The Cosmodrome” talks about how dogs are our co-pilots in life and are ready for the journey.

The second song “If I Start A Race” is about the human existence and the impact we have on this planet. The lyric’s are humorous, but filled with pathos.

Back on track with the human emotion and the immortal friendship between pilot and co-pilot  the two journey to the stars in another bonding of man and dog.

“A Russian Canine Beauty Pageant” is how the canine in question was chosen. He is looking for love and is so in need, that we fall for this puppy who has no idea what’s in store.

“Werner Von Braun” about how we hired the Nazi’s. The show is taking on Chess like vibrations and David Bowie hues. We also learned how animals have not had successful journeys into man’s climb for success.

“Babies to Time” and “Ahead in the Van” give more history.

“Fuzziest Loneliest” breaks your heart as Latka sings about his friends not coming back and how man is so ungrateful. His longing for love is unfulfilled.

“Progress” explains the hidden faults of the space race. The lies perpetuated and the death of hundreds of animals are exposed. The question lies will we ever open our eyes?

“Byelka Strelka” has a very early Beatles sound to it, as well as strains of Queen.

“Fill the Void II”, again strains of Bowie and the disgusting treatment of Latka.

“Space Opera,” isn’t really an opera but the distraction of Latka and his dreams. This soundtrack is powerful and if you think we are kind to animals….think again. For those who do not know the story of Latika, she rode Sputnik 2 into Earth orbit, 2,000 miles above Moscow’s streets. The capsule was overheated, cramped, with no food. The space dog gave her life for her country, a canine suicide mission. Sputnik 2, smashed into the Earth’s atmosphere 64 years ago. They expected Laika to die from oxygen deprivation within 15 seconds after seven days in space.

Space Dogs is supported by the Gary Platt Initiative for New Musicals, Nicole and Stephen Eisenberg, the Burton A. Zipser and Sandra D. Zipser Foundation, and public funds from The New York City Department of Cultural Affairs in partnership with the city council. Space Dogs  was developed in SongLabs with leadership support provided by Jill Furman.

The album is produced by Van Hughes and Nick Blaemire, with Kurt Deutsch serving as executive producer. Order now at ghostlightrecords.lnk.to/SpaceDog

Suzanna BowlingJanuary 29, 2023
Read More
Scroll for more
Tap
How I Learned To Drive Begins Previews Today and T2C Talked With Alyssa May Gold
Meet Joey Contreras a Musical Writer on The Rise