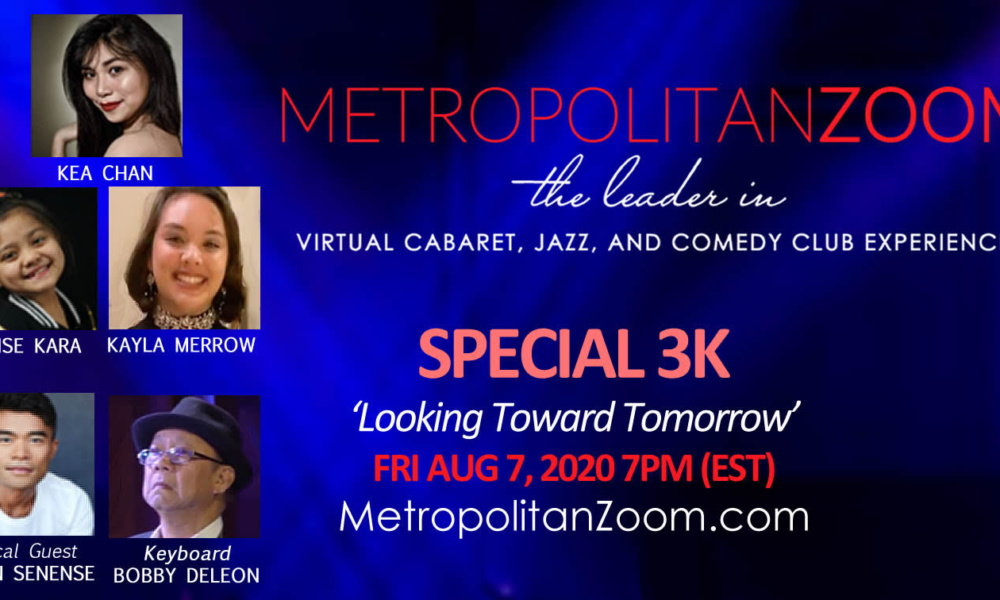 Special 3K created and produced by Robert R Blume of Step Forward Entertainment, highlights three young performers from 10 to 22 years old. Kea Chan, Kayla Merrow and Denise Kara will make their professional debut together on August 7th at 7pm EDT on the virtual nightclub site, Metropolitan Zoom with their concert Looking Toward Tomorrow.

The concert will offer popular songs that celebrate love, hope and happiness, as we look toward better times.

Included in the concert will be a musical tribute to the family of the late performer Nick Cordero and other victims of Covid 19, as well as songs celebrating Disney princesses.

Robert R. Blume, President of Step Forward Entertainment said “Getting to work with these three exciting young female performers has allowed me to realize first-hand, the synergy they had both in talent and personality.  I met these young women thanks to my associates Marya Coburn and Bobby DeLeon. While watching these high-energy performers play off each other, I realized they are the perfect trio for today. I began to think of them as Special K, because all three of them have names that began with the letter ‘K’.”  Thus, to me, they became Special 3K!”

This virtual Live Special 3Kconcert, Looking Toward Tomorrow is available via a $25 ticket purchased from https://metropolitanzoom.ticketleap.com.

Bernard Furshpan (prior owner of The Metropolitan Room), the creator/owner of Metropolitan Zoom has created a Virtual Night Club different from typical Jazz, Cabaret, and Comedy Live Streaming performances because the production is set on a venue stage and performers are able to engage with audiences and see their facial reactions, just like an in-person night club experience” which makes it perfect for the Special 3K debut.

The concert will be staged by Justin Senense, who will also perform.  International Musical Director, Bobby DeLeon, will musically direct and accompany the trio. Kea, Kayla and Kara look forward to introducing themselves to you.

Kea Chan, was called “breathtaking” by Broadwayworld.com. Times Square Chronicles (t2conline.com), heralded Kea as “a performer to keep your eye on”. This native Filipina most recently appeared in The Actors Fund benefit concert celebrating the music of Neil Sedaka. She also appeared on the Amazon Prime TV series, Homicide City. At The Green Room 42, Kea appeared in several concerts. A finalist for the lead role of Kim in the recent Broadway revival of Miss Saigon, Kea has had the honor of singing for the Presidents and Ambassadors of the Philippines, Japan, Singapore and Hong Kong. Performing since she was 11, At 13, Kea won the Philippine Child Performer of the Year award. Kea has performed in Indie Shorts, the Film Festival circuit, Bronx SIU on Amazon Prime, Las Vegas hotels, the Hudson Guild Theater, The Triad and Feinstein’s 54 Below.

Denise Kara, at 9 years old, made a name for herself in the Filipino-American community as a major live performer. She recently appeared in The Actors Fund benefit concert celebrating the music of Neil Sedaka and was featured at The Green Room 42 in the American Popular Song Society Christmas Special. Kara auditioned for TOMMY on CBS and Nickelodeon, where she impressed the casting directors. A highlight in the virtual concert benefit for My Sisters Keeper, she helped raise money for the Black community.  She also recently performed in Luminaries a concert celebrating Filipinos of Achievement. Kara sings, dances, writes original songs, plays ukulele and piano! Kara is dedicating this concert to her grandmother who recently passed away.

Kayla Merrow, is a newcomer to the business. She most recently appeared in The Actors Fund benefit concert celebrating the music of Neil Sedaka. This 19-year-old professional actor/singer/dancer is still in college but is competing for professional jobs. She has performed as a guest singer in several shows and competitions. Some of her favorite roles have been portraying the fabulous Reno Sweeney in Anything Goes, and the mysterious Wednesday Addams in The Addams Family Musical. She really looks forward to learning and gaining new experience in the near future when the industry opens back up.

Justin Senense (Guest Performer / Director), is an American actor/singer of Philippine heritage, most recently appeared in The Actors Fund benefit concert celebrating the music of Neil Sedaka. He was also seen playing the lead in the award winning indie short film Howard. Some of his favorite credits include, Angel in Rent (Westchester Broadway Theatre), Benjamin in Joseph and the Amazing Technicolor Dreamcoat (National Tour) and Hair (Italian Tour).  He is also a director of cabaret performances and the director of this show!

Bobby DeLeon (Musical Director/Piano-Synthesizer), has accompanied both Kara and Kayla in the Neil Sedaka concert. He is an extraordinary, International Music director, arranger, pianist and synthesizer who plays entirely by ear and does not read music! Bobby started playing piano at 4 years old and was in demand throughout Asia for many years while working as a Music Director for prominent groups or playing piano in Japan, Malaysia, Indonesia and Qatar. He was a favorite and personal music director/pianist for Imelda Marcos, former First Lady of the Philippines, when she would give public performances in the United States. He has conducted and music directed shows for some of the most prominent Filipino stars and performers both in the US and abroad. He has conducted a number of shows in major hotels in Atlantic City.

Step Forward Entertainment, an entertainment production and talent management company headquartered in New York City which represents clients in Los Angeles, Florida and other areas in the US. The company was founded by renowned producer / talent manager, Robert R. Blume (“Bob”).  With strong roots on Broadway as an Executive Producer of the annual Drama Desk Awards from 1999 to 2018, Mr. Blume represents talent and produces TV, film and theatre. He is proud to present this virtual concert in association with Marya Coburn of 5 Cambridge and Pat Labez. For more information visit www.StepForwardEntertainment.com