Spider-Man Re-Imagined by The Animated “Spider-Man: Into the Spider-Verse” 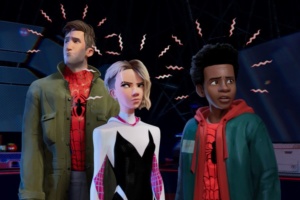 Spider-Man Re-Imagined by The Animated “Spider-Man: Into the Spider-Verse”

“Spider-Man: Into the Spider-Verse”

Spider-Man, the nerdy teenager given the proportional strength of a spider, has had many incarnations over the decades in the comic books — whether it’s the nerdy Steve Ditko original, the hunky Romita senior version, or the porcine Spider-Ham.

In the case of the Spider-verse, various Marvel madmen came up with the idea of a multiverse with endless Spider-Man variants, pulled together over decades. The digitally animated “Spider-Man: Into the Spider-Verse” — was based on the idea that African American teenager Miles Morales (who originally appeared in Marvel’s Ultimate line of comics which set much of the tone and look of the current Avengers films), got bitten by a radioactive spider, suddenly developed mysterious powers (transforming him into an Alternate Earth Spider-Man), and then, as the hero, saved the many universes.

In the place of the original Peter Parker, Miles is another nerdy teen who battles the hulking madman crime boss Kingpin — who has gone from extortion and drug trafficking, to opening portals to other dimensions. The Webhead’s colossal foe now threatens not only this Earth’s Spidey, but also has the power to destroy a bunch of other Spideys, such as a Japanese girl with a giant spider-robot, and an alternate version of Parker’s deceased gal-pal Gwen Stacy(who is now not dead but is masked).

Since Sony Pictures’ executives retained the rights to Spider-Man, their Spidey films represent an effort to be a part of that Marvel Universe, but also doing their part to stand out from it as well. In order to do so, they have rounded up their share of A-list actors and a seasoned team of animators to create an entertaining version of Spider-Man and these multi-verse variants.

The directing trio of Bob Persichetti, Peter Ramsey, and Rodney Rothman coalesced in 2017, and they all decided to make a unique film with a style which combined Sony Pictures Imageworks’ in-house computer animation with traditional hand-drawn, comic-book techniques inspired by Sara Pichelli, Miles Morales’s co-creator. Up to 140 animators — the largest crew ever assembed by Sony — made the critically acclaimed “Spider-Man: Into the Spider-Verse.” Snarky though it be, it also prompts much thought on what other multi-verse Spideys are possible. Some of weird ones already imagined include Spider-Man Noir (Nic Cage) and Spider-Ham (John Mulaney) — a talking cartoon pig in a Spider-Man outfit.

With success in hand, coupled with the critical enthusiasm, awards wins for “Spider-Man: Into the Spider-Verse” — and a likely Oscar — sequels and several spin-offs are already in development. Since comic-book superhero mega features have become conceptually tired, this stimulating re-think is worthy of all the big screen attention.

Suzanna BowlingAugust 1, 2022
Read More
Scroll for more
Tap
Spike Lee’s “Blackkklansman” Takes Us All by Surprise And Gets Him The Recognition He Deserves
BroadwayHD Gets Plucky in March with Debut of West End Production of Hetty Feather from Olivier Award-Nominated Director Sally Cookson