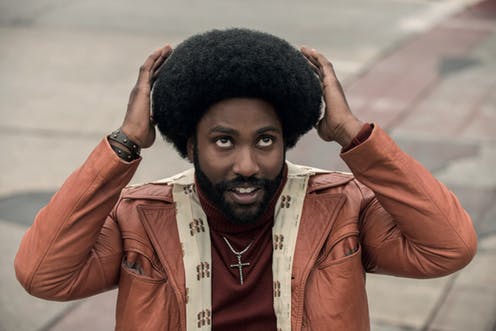 If any film came up from behind this summer and bit everyone on the ass, it was Spike Lee’s return to form —BlacKkKlansman.” Assuredly an award contender from the start, Lee’s iteration of this true story — a Black policeman uses a ruse to join the KKK in order to keep these  unreconstructed racists at bay — is spot-on from beginning to end. Ands hopefully, he Lee will be awarded one sort of Oscar or another for his first Academy Award nominated film.

Grit might be the word to best describe this dissection of American race relations, or the lack there of, through this period piece. When Lee got his hands on “Black Klansman,” retired police detective/author Ron Stallworth’s out-of-print book, he realized what a story he had on hand. This Brooklynite could have just told about Stallworth’s rise to being the first black detective in Colorado Springs. That story of what Ron endured could made a strong movie in and of itself. But the full narrative offered by his memoir provided incredible fodder for a film to be made. And in doing so, Lee found a way, by looking into the past, to tell a constantly gripping contemporary dramedy — will the Klan ever discover who Stallworth is? — and was actually able to show the absurdity of their beliefs then and now.

Undercover cop Stallworth (John David Washington) does more than that just talk with the Klan and its leader David Duke (Topher Grace), he even persuades fellow cop Flip Zimmerman (Adam Driver) who happens to be Jewish, to actually attend their surreptitious meetings so that the two keep an eye on their criminally threatening activities.

As a director and personality, Lee can be irascible, outrageous, provocative and challenging; in this film, he’s all those things but has anchored his varied filmmaking techniques and statements through a story where he’s not only passionate about his characters but also imbues them with a mission. Without ever lagging at any point, Lee works in humor, philosophy and tension throughout. The film even shows a human side to the Klan members without letting audiences forget they are the bete noir to any kind of positive, progressive movement.

He does all of these things with “Blackkklansman” — an outrageous story made all the more outrageous because it was true. The Klansmen look like the fools they are without him having to even slightly exaggerate. And the injustice that led to millions of black people enslaved, tortured and damaged, is properly framed through a contemporary lens to make sure we don’t forget of the awful consequences of the Klan and its beliefs.